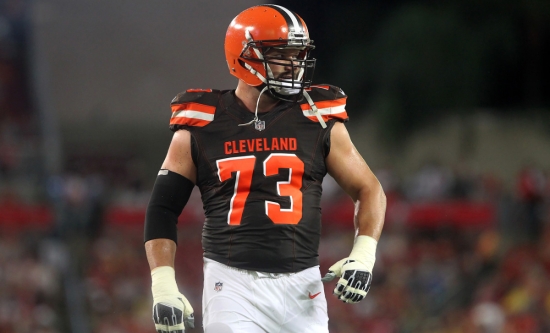 Is it that time again!

One of our core lists on Notinhalloffame.com, our list of those to consider for the Pro Footnall Hall of Fame has been revised.

The steps in our revisions are basic:

-Input those we think worthy who are now eligible.

-Adjust rankings based on your votes and comments.

The entire list can be found here, but here is our new top ten:

#1. Joe Thomas.  The career Cleveland Brown enters his first year of eligibility, and we expect that Thomas will walk in easily.  Although Thomas’ teams had way more losses than wins, he is a member of the 2010s All-Decade Team, a ten-time Pro Bowler and a six-time First Team All-Pro.  He should be a lock.

#2. Chuck Howley.  Ranked #3 last year, Howley starred at Linebacker for Dallas, where he helped them win Super Bowl VI, after winning the Super Bowl MVP in the Cowboys’ losing effort the year before.  A six-time Pro Bowler and five-time First Team All-Pro, Howley’s path has to come via the Senior’s Committee.

#3. Randy Gradishar.  The star of the Orange Crush Defense, Gradishar was the NFL Defensive Player of the Year in 1978, and went to seven Pro Bowls and had five First Team All-Pros.  Gradishar was a Finalist three times, most recently in 2020, on the Centennial Slate ballot.  He was ranked #2 last year.

#4. DeMarcus Ware.  Ware was ranked #1 last year, and while we thought he was going to enter last year on his first year on the ballot, it was not meant to be, although he reached the Finals.  The Linebacker played for Dallas and Denver, winning a Super Bowl in his final season.  A member of the 2000s All-Decade Team, Ware twice led the lead in Sacks, three times in Tackles for Loss, and went to nine Pro Bowls.  Ware is also a four-time First Team All-Pro.

#5. Darrelle Revis.  The New York Jets may not have had much to crow about over the last twenty years, but Darrelle Revis and “Revis Island” was one of the finest displays of Cornerback work over the last decade.  Revis was a four-time First Team All-Pro, seven-time Pro Bowl Selection, and he won a Super Bowl with New England.  This is his first year of eligibility.

#6. L.C. Greenwood.  Greenwood helped the Steelers win four Super Bowls in the 1970s and he was a Finalist for the Hall six times.  A six-time Pro Bowl and two-time First Team All Pro, the Defensive End was also chosen for the 1970s All-Decade Team.  He drops two spots this year.

#7. Torry Holt.  Holt is destined to follow his Hall of Fame Rams teammate and fellow Wide Receiver, Isaac Bruce into Canton.  A Super Bowl Champion with St. Louis, Holt was an All-Decade Selection, seven-time Pro Bowler and he has been a Finalist the last three years.  Holt slid one spot on this year’s rank.

8. Ronde Barber.  Moving up two spots, Barber played his entire career with Tampa Bay, where he won a Super Bowl.  A member of the 25-25 Club, Barber went to five Pro Bowls and was a 2010’s All-Decade Selection.  He has been a Finalist the last two years.

9. Roger Craig.  A former Offensive Player of the Year and three-time Super Bowl Champion with San Francisco, Craig made history as the first player to rush for 1,000 Yards and receive over 1,000 Yards in a season.  The four-time Pro Bowler was ranked at number five last year, and was a Finalist in 2020.

10. Zach Thomas.  Thomas has been a Finalist the last three years and likely will be again in 2023.  The Linebacker was an All-Decade Selection in the 2000s, a two-time leader in Combined Tackles, and was a five-time First Team All-Pro.  Thomas was ranked #21 last year.

There were many other new entries on our top 300.

James Harrison went from undrafted to two-time Super Bowl Champion and Defensive Player of the Year with the Steelers.  The five-time Pro Bowler debuts at #51.

Defensive End, Dwight Freeney, went to seven Pro Bowls, was a three-time First Team All-Pro and won the Super Bowl with Indianapolis.  Freeney had 125.5 career Sacks and comes in at #61.

Shane Lechler, who is one of the best Punters ever makes his first appearance on the list at #110.

Thank you all for your support, and we encourage you to cast your votes and offer your opinions.

More in this category: « Our All-Time Top 50 Atlanta Braves have been revised to reflect the 2022 Season RIP: Taylor Hawkins »