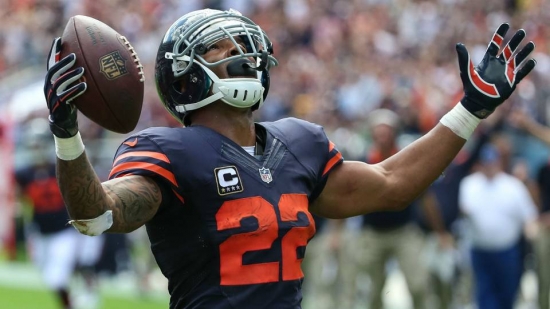 One of the better dual threat Running Backs of his era, Matt Forte was a surprise starter as a rookie in a season that would see him rush for over 1,200 Yards and finish seventh in the league.  The product of Tulane early established himself as a solid receiving back with 63 Receptions and he quickly became a favorite of the Chicago Bears’ fanbase.  Forte would play for Chicago for eight seasons and while he was only named to the Pro Bowl twice (2011 & 2013) cases could have easily been made for him in other seasons.  He would have five seasons where he would go over the 1,000 Yard mark rushing and would also have six 50 Reception seasons, punctuated by a 102 catch campaign in 2014.  As a testament to his offensive versatility, Forte would finish in the top ten in Yards From Scrimmage highlight by a 1,933 Yard year in 2013.

Forte would sign with the New York Jets where he would play in the last two years of his career, but of course he returned to Chicago to sign a one day contract so that he could appropriately retire as a Bear,  His career would end with 9,796 Rushing Yards, 4,672 Receiving Yards, 75 Touchdowns and 14,468 Yards From Scrimmage.

Should Matt Forte be in the Hall of Fame?