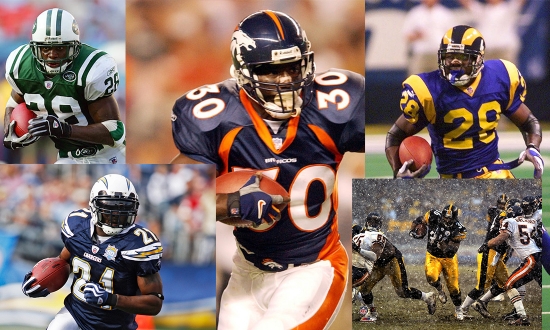 With no Running Backs entering the Pro Football Hall of Fame Class in 2021, this is the second straight year that the Modern Positional Average for Running Backs remain unchanged.  These are lofty numbers by the last five but it will likely rise when Davis is no longer among the last five RBs inducted. Peterson is likely a first-ballot inductee right now, and the question now is whether or not he will have the opportunity to continue his career in 2021.  He had 604 Rushing Yards and 7 Touchdowns last year with Detroit, which should be good enough for a team to give him another shot, though at age 35, that is no guarantee. 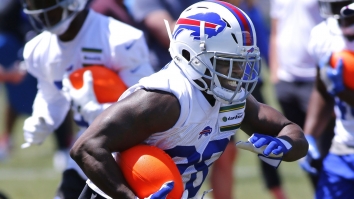 At present, Gore's MPA has been exceeded in both Rushing Yards, Receiving Yards, and Rushing Touchdowns, but he is not employed as of this writing by any NFL team.  Gore is at an even 16,000 Rushing Yards and is 726 behind Walter Payton for second.  He played for the Jets last year, and is awaiting employment this season, and should find it.  Gore is the classic case of a long-time compiler, as opposed to a superstar.  Nevertheless, when you compile as much as Gore has, you will enter Canton. 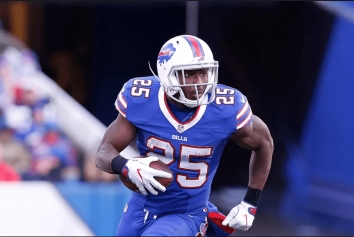 The best seasons of McCoy’s career are in his rear-view mirror, but he won back-to-back Super Bowls, 2019 with Kansas City and 2020 with Tampa Bay.  His All-Decade Selection, helped McCoy’s Hall of Fame candidacy grow, but despite his second ring, he only had 132 Yards From Scrimmage in 2020, and may not see employment as a player again.  Going into 2021, McCoy has an even 15,000 Yards From Scrimmage and 89 Touchdowns, which are numbers that are Hall of Fame worthy a generation ago. 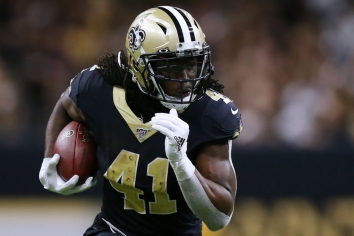 Kamara may not have been a First Team All-Pro in his four-year career but his production as a dual-threat Back has been nothing short of incredible.  Kamara currently has a strong AV/G of 0.9000 is incredible, and if he continues like this, it won’t matter that his ground attack has not yet brought him four digits that avenue.  He already has the MPA for Receiving Touchdowns, and is 15 Yards away from hitting that mark. 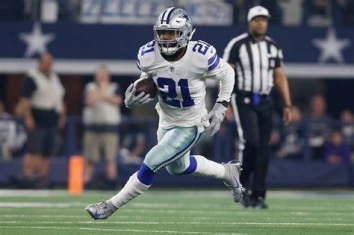 FIve years into his career, Elliott is a two-time rushing leader, who has been second in Yards From Scrimmage three times.  “Zeke” is a star whose best seasons could still be ahead of him, although he is coming off his lowest rushing totals (979 Yards, 6 TD)

2022 US GYMNASTICS CHAMPIONSHIPS - ALL SESSIONS AT AMALIE ARENA IN TAMPA, FL

Buy your Tickets to see 2022 US Gymnastics Championships - All Sessions at Amalie Arena in Tampa, FL HERE for as little as $!

2022 US GYMNASTICS CHAMPIONSHIPS - SESSION ONE AT AMALIE ARENA IN TAMPA, FL

Buy your Tickets to see 2022 US Gymnastics Championships - Session One at Amalie Arena in Tampa, FL HERE for as little as $18!

Buy your Tickets to see 2022 US Gymnastics Championships - Session Two at Amalie Arena in Tampa, FL HERE for as little as $26!

Buy your Tickets to see Preseason Game 1: Chicago Bears at Seattle Seahawks at Lumen Field in Seattle, WA HERE for as little as $30! 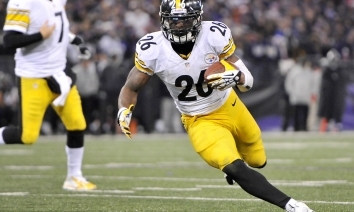 This is what we wrote last year:

Oh boy.  Bell may have flushed his Hall of Fame chances down the toilet with a 328 Yard campaign in 2020 where he asked to leave the Jets, landed in Kansas City, where he did little of note, except for trashing future Hall of Fame Coach, Andy Reid. He will be lucky to get another chance. 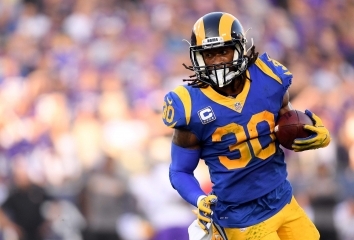 A lot was made of Gurley’s production drop off in 2019 where he dipped below 1,000 Rushing Yards, but he did have 12 Touchdowns on the ground.  They were right, as in 2020, his lone year in Atlanta, he still got through to the end zone often (9), but his Rushing Yards (678) were a career-low.  He is trending in the wrong direction and his AV/G has dropped dramatically from 0.8103 two years ago.  Gurley needs to turn it around soon. 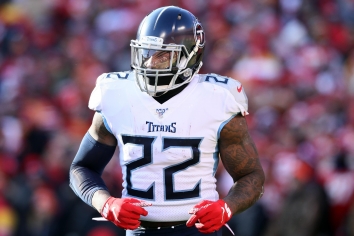 In 2019, it felt like Derrick Henry won the Rushing Title out of nowhere, as he was in his fourth year, and it he only had 1,059 Yards the year before.  In 2020, Henry won his second Rushing Title, and shattered his previous mark, and joined the 2,000 Yard Rushing club. 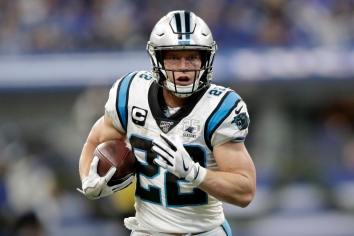 McCaffrey had a decent rookie year, a good second year, and a fantastic third season, where he led the NFL in Yards From Scrimmage (2,392) and Touchdowns (19).  The Running Back also rushed for over 1,000 Yards and caught passes over 1,000 Yards, a rare feat indeed!  Due to injury, he could not follow up on that, but if he is healthy over the next few years, couldn’t we see him easily getting right back on track?  He has already hit the MPA for Receiving Touchdowns. 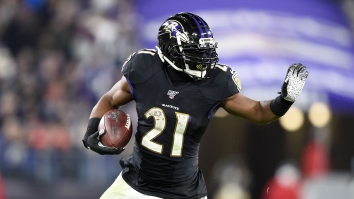 We argued last year that Ingram’s path to Canton would have to be as a compiler, but 2020 was his weakest season to date with only 349 Yards from Scrimmage.  He now leaves powerful Baltimore for the slumping Texans and at age 32, we are not even sure he will get to 10,000 YFS. 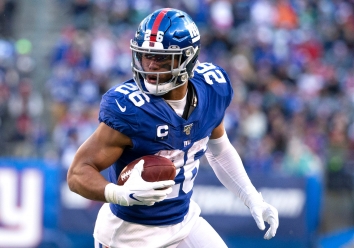 Barkley was the stud that we expected him to be as a rookie, earning a Pro Bowl and leading the NFL in Yards From Scrimmage.  His output dropped as a sophomore, but was still strong, and there was no reason to think that he couldn’t dominate in 2020, but a torn ACL early took that away.  Barkley starts 2021 on the IR, and when Running Backs get hurt, they struggle to regain top form more than other position players. 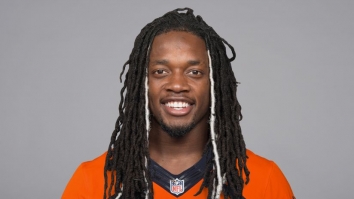 Gordon is a six-year vet and has been in that second tier of Running Backs since he arrived.  A two-time Pro Bowl Selection, Gordon has to reach another level for him to gain any real Hall of Fame traction. 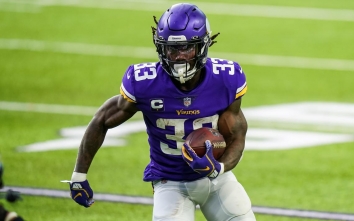 Cook is closing in on 5,000 Yards from Scrimmage, and has an AV/G over the MPA, though he is only a four-year vet.  Nevertheless, should he replicate his 2020 year a few times, Cook will be in the conversation. 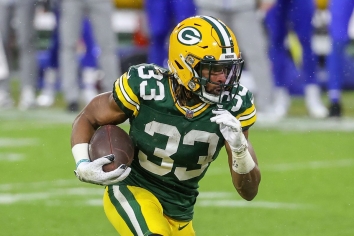 Jones has played all four of his years in Green Bay, and he has exceeded 1,000 Yards from the ground the last two.  He should be able to make it three in 2021. 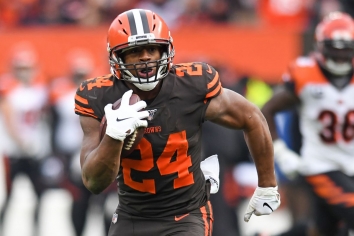 Chubb emerged as the top rusher for an improving Browns offense, and the two-time Pro Bowler cracked the 1,000 Yard mark twice.