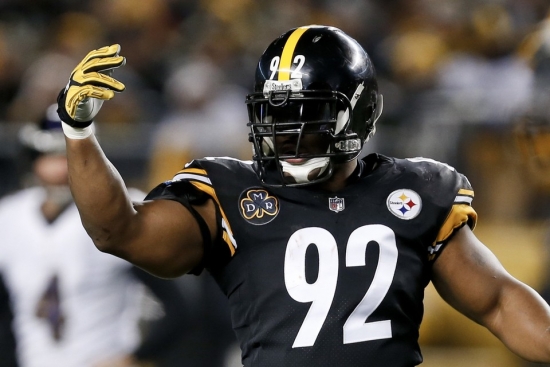 James Harrison went undrafted from Kent State in 2002 and while he played well there he did not gain a lot of looks from NFL scouts who feared that he was to short (6’ 0) and too light (240 lbs) to be an effective Linebacker at football’s highest level.  The Steelers gave him a shot and he was and on an off their practice squad for two years, including a stint on Baltimore’s practice squad and also a run with Rhine Fire in NFL Europe but he while he was impressing athletically he was labelled a head case by some for getting confused in practice sessions and giving up on plays.  Something clicked in 2004 and he made the Steelers roster for good playing Special Teams and coming off the bench but in 2007 he made the jump to starting Right Outside Linebacker and would be named to the Pro Bowl.  That was good, and had his career ended there it would have still been great considering where he came from but as Steelers fans would see they hadn’t seen anything yet!

Deebo would have an incredible 2008 where he was a First Team All Pro, had a career high 16 Quarterback Sacks and would lead the National Football League in Forced Fumbles and Approximate Value while also winning the prestigious Defensive Player of the Year Award.  More importantly he would lead the defensive team in a win at Super Bowl XLIII and was returned an interception for a touchdown that day, though he still might be winded from it!  Harrison went to the Pro Bowl the next three years, with a second First Team All Pro nod and he helped them reach (though they lost to Green Bay) Super Bowl XLV.

Harrison signed with the Cincinnati Bengals for 2013 and retired shortly after only to return to Pittsburgh until he was released late in the season in 2017.  He finished his career playing with the New England Patriots that year where he helped them reach the Super Bowl.

Harrison retired with 84.5 Quarterback Sacks but as an elite player for only five years and wither average or mediocre for the rest of it a Hall of Fame selection might be hard but any former Defensive Player of the Year should receive consideration.

Should James Harrison be in the Hall of Fame?