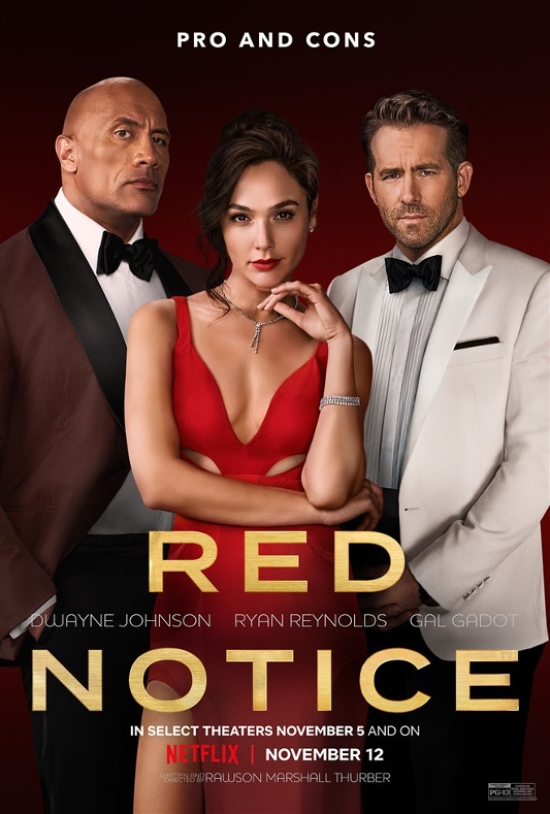 After a pretty long break of providing movie and television reviews, I have decided to submit a new one. For this edition of “Was I entertained” I went to Netflix to select something to watch on a fall Saturday night. After logging into Netflix, I cued up my profile and started looking at the list I had created. Well, let me tell you, Netflix has a lot of great stuff, but we also came across a large number of crappy selections. So we started and discarded 4 films before we finally settled on “Red Notice”.

We should have started with this film, as my wife and I are both fans of the 3 principal actors (Johnson, Gadot and Reynolds). For the people (like us) who do not rush to watch a new Netflix film once added, but wait a while, let me give you a quick synopsis of what “Red Notice” is about.

The film starts with a small (fictional) history lesson about 3 golden eggs that were apparently owned by Cleopatra after receiving them from Marc Antony as a wedding gift. Naturally, over the course of history, these eggs had disappeared only to be found by a farmer in the early 20th century.  Two of the eggs were recovered but the 3rd one was lost. Fast forward a hundred plus years, a very rich Egyptian wants to recreate the prestige of these eggs and present them to his daughter (also named Cleopatra) as a wedding gift, and he is offering 300 million to anyone who can provide them.

Enter Nolan Booth (Reynolds), the self proclaimed top thief in the world. He apparently knows the location of the third missing egg and is hell bent on stealing the other two from a museum and a gangster’s private collection. In the first scene where Nolan (Reynolds) is trying to steal the egg from the museum, he is being pursued by Hartley (Johnson), an FBI agent and an intrepid Interpol Inspector, Urvashi Das (Arya). The first contact between Booth (Reynolds), Hartley (Johnson) and Das (Arya) has an awesome chase sequence, with numerous quips, wanton destruction and everyone running full speed ahead. This actually sets the tone for the rest of the film as the heroes try to fulfill the rich man’s wish of providing the 3 eggs to his daughter as a wedding gift.

Due to a series of double crosses and twists, we find our two heroes in a Russian jail. Hartley (Johnson) and Booth (Reynolds) continue to perform a quick witted banter between the two and develop a friendship (Ok we knew this was going to happen, but it helps with the films enjoyment). We also are introduced formally to the Bishop (Gadot). We know that everyone wants the eggs, or in the case of Hartley (Johnson) a chance to clear his name as he felt that he was improperly incarcerated by Das (Arya). It is at this point, the action increases as the three are in search of the eggs while trying to elude Das (Arya). Not to give out too many spoilers here, lets just say that there are more double-crosses and twists in this film than a game of murder mystery. Some are predictable, some are downright surprising. Along the way, we are provided numerous scenic views from around the world (Rome, Bali, London, Valencia and Cairo to name but a few) and some stunning cinematography. While much of the film was completed in Georgia, there was still the actual cities filmed for the set-up of the scene if you will.  The jokes and action continue and we are also given an homage of sorts from other great movies, Raiders of the Lost Ark (trilogy), True Lies, National Treasure, The Thomas Crown Affair and Oceans 11. All in all, a pretty enjoyable action/comedy movie.

What did we like about the film? Well, first I have to say that the chemistry between all the main actors was great. Granted, they have all been in at least one other film together besides Red Notice.  But to my knowledge this is the first time they have all been together for a film. The cinematography was excellent, the script was fast and funny and the direction seemed to be spot on. While there were some areas of predictability in this film, it was ok and we did not mind it. We were enjoying the experience. I also enjoyed the homage to the aforementioned classic films. It was clear that it was not a rip-off of ideas that some directors/films do, but rather a salute or acknowledgement of them. So in that aspect, we enjoyed that as well.

As I mentioned, the chemistry was great between all concerned. So in that light, lets take a look at each character:

Dwayne Johnson as John Hartley: If you are a follower of these blogs, there is no doubt that you have determined that Johnson is a family favourite. I don’t think we miss any film that he is in as we know that it if Johnson is in it, we will probably like it a lot. Sure, some of his films are not as funny or action packed as others, but I really don’t think there is any of them that we outright disliked. In Red Notice, we find Johnson pretty much playing the role that he always does in his action comedies. Quick with the wit, the laugh, and the fists. His character, while not really “deep”, it is substantial enough that you don’t really see too many flaws. With the character of Hartley, you knew what you were getting, action, a few one liners and a few laughs.  It is proven formula for Johnson, and it works every time. Overall, we really enjoyed this character, and Johnson in Red Notice. Even though I have been watching his films ever since he crossed over to film from his wrestling days, I still enjoy pretty much all of his roles and characters. Sure, there maybe some weaker ones, but pretty much any film that he was a key character, has proven to be an enjoyable experience to watch in our household. All in all, another successful performance by Johnson.

Ryan Reynolds as Nolan Booth: Reynolds, much like Johnson, plays pretty much the same role that has made him a household name. He is quick with the wit, awesome one liners, and of course performs great action sequences. As with Johnson, he is also a family favourite. Hell, you could say he is a national favourite, as our city actually commemorated a street with his name just a little while ago. I have been watching his career progress since my wife and I first came across, “2 guys, a girl and a pizza joint”. For us, he made the show, and every film afterwards his career has just boomed, (well except for Green Lantern I suppose, but believe it or not, I actually did not hate that film as much as many others have). Deadpool is really where he came to his own and ensured that his fan base really solidified and gerw. In this film, I liken his character to what he played in “The Hitmans bodyguard”. Which was also an enjoyable character and role for him. He definitely has great chemistry with all his co-stars, and the character, while actually a bit shallow, was extremely enjoyable. From our perspective, another great film with Reynolds in it.

Gal Gadot as The Bishop: Gadot is really moving forward in the industry of late. I remember seeing her in the “Fast and the Furious” franchise and really wondered who she was. Time went on, she got more roles, some small, some large and her career just continued to grow. When she took on the mantel of Wonder Woman, she truly started hitting a-list roles and characters. In this film, she really plays both sides of the house, the antagonist, as well later on the protagonist (same as Johnson) and she did it well. Her comedic deliveries, while not as polished as Reynolds or even Johnson, were still well done and she played her character well off of their shenanigans and fast paced delivery. As with other co-stars, a fine performance in an enjoyable film.

Ritu Arya as Inspector Urvashi Das: This actress was familiar and it took me a bit to put a finger on where I had seen her before. It was not until I looked at IMDB that I found out that she was in The Umbrella Academy, a show that I found very intriguing. As the Interpol Inspector who was in hot pursuit of these ne’er do wells, she played it well enough against the star power of her co-stars. Her character actually reminded me of Reynolds love interest in the first Hitmans Bodyguard film. An important character, but yet one that could potentially be forgotten within the action and comedy of the film. That could be the problem when a relatively unknown actor is pitted against some major star power…the character can become lost. However, having said all that, we have to say her character and delivery was pretty good throughout the film, and her chemistry with her co-stars was also notable. Her character was actually the drive for many of the situations and the plot, but as I said before, it can almost get lost as you watch the film as you are anxious to see what will be the next and you forget that her character was the impetus. However, having said all that, her character was well played and we enjoyed it in the film.

So now is the question, were we entertained? Yes, we were. It was a nice light film that had plenty of action and laughs throughout. There was a solid cast, great snappy dialogue, wonderful cinematography and enough salutes to other films to make it worthwhile. We would recommend this film to anyone who is a fan of the 3 principal stars, or anyone who enjoys the buddy action flicks. All in all, a wonderful way to kill a few hours on a wet fall evening.

If you are interested in any film that I have reviewed of the primary cast, please click on the links below: