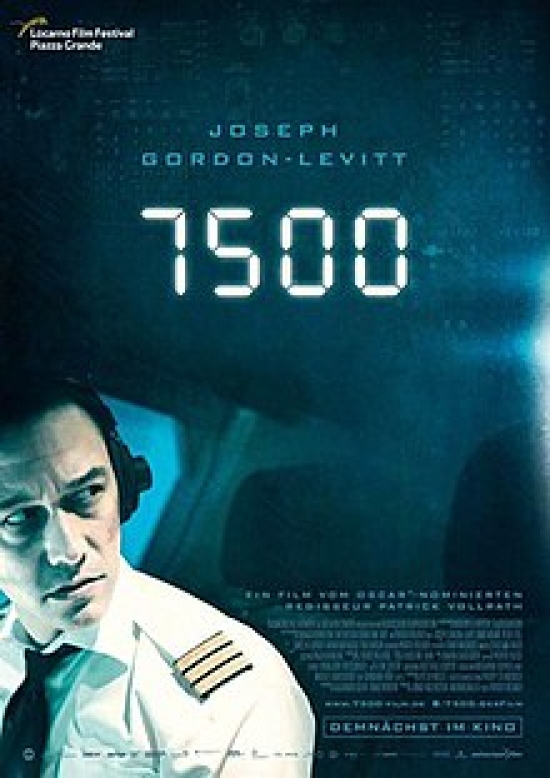 After a small vacation in the Dominican Republic, I felt it was time again to put fingers to keyboard and complete another review for “Was I entertained?”. I have pretty much gone through all of my unwatched blu-rays that I had collected prior to my retirement, so I am now relegated to either purchasing a new film or seeing what Amazon or Netflix has in store for us. With that in mind, I handed my wife the remote for Amazon and told her to select something good. While some of you may think that by giving my wife the remote we would be destined to watch a RomCom with Sandra Bullock or Reese Witherspoon or some type of musical, I have found that my wife can usually find something that will be pretty much obscure, yet entertaining.

I went and grabbed a dram of scotch to enjoy whatever the choice would be and by the time I returned I saw that she had selected 7500 for the nights’ entertainment. I had seen 7500 in the menu on Amazon Prime for a while, but I knew that any movie that centred around flights usually caused my wife some angst, so I never selected it as I did not want to affect our upcoming vacation. However, as we had just returned from one, my wife must have decided that it was time to watch it.

With that in mind, what is 7500 about. This film is basically a “Hijack” film. While this genre of films was huge in the 70’s and 80’s due to the fact that terrorists/activists would tend to hijack a flight to make their political statements. After 9/11, this type of film kind of went to the back-burner unless it was of course about 9/11. In my opinion, 7500 has built upon the foundation of the historical acts that involved hijacking and real events. In this film, we have Gordon-Levitt as the co-pilot for a European airline. Joining him, there is Capt Lutzmann (Kitzlinger) his partner and love, Gokce (Tezel), who happens to be a flight attendant as well. While the aircraft is getting reading for loading, we are shown some airport security cam footage of the likely suspects purchasing some alcohol at the Duty Free. Back in the cockpit we observe the usual banter between the crew as well as the couple of Ellis/Gokce (Gordon-Levitt and Tezel). At this point, I find the film somewhat interesting as it really focused on some of the details of the cockpit and what the crew does in preparation for a flight. This flight is from Berlin to Paris, a relatively short flight, actually a flight that is probably just a few minutes longer than this film. So you know action will have to start almost immediately. (Spoiler alert).The plane takes and the cockpit crew settle the aircraft on autopilot and the standard announcement is made about the in-flight service. The flight attendant knocks on the cock-pit door and is admitted. Now comes the action, the aforementioned “suspects” who were making purchases at the Duty Free have smashed their bottles and are now using the broken glass as knives to take over the aircraft. One of them makes into the cockpit and after a scuffle is laid out, but not before he wounds both pilot and co-pilot.

It is at this point that the rubber hits the road in the film. Our “hero” has taken back the cockpit and has declared a “7500” this term is the code word to inform the controllers that the flight has been hijacked. The aircraft is now under his control and he is alone to make all the decisions. The bad guys are trying to break in and demanding that he let them in or they will kill some of the passengers. While Elis does not let them in, via CCTV he can see what is happening just outside of the cockpit door.

I really don’t want to go further in the plot, as it is a short film, and if you decide to watch it, there should be some surprises for you. But let me tell you one thing, once the attack took place, my wife and I were on the edge of our seats. The tension in the film was amazing as well as the acting, specifically from Levitt. He is really the one and only actor in this film. For at least 45 minutes, we observe a roller coaster of emotions, action, and decisions made by him to try and ensure that he can get everyone to safety.

As I have mentioned, there is really only one actor in this film and it is Gordon-Levitt. He has sure come along way since I had first seen him in the sitcom “Third Rock from the Sun”. While that show was not my favourite, Lithgow’s character would make me laugh on occasion and I would check out the show if there was nothing else on. I never really cared for Levitt’s character and so I kind of dismissed him for years. It was not until “The Dark Knight Rises” and “Looper” in 2012 that I actually started paying attention to his films again. It was at that point, we, the audience were really being introduced to his scope of talent. However, until this film, I had not really seen what he was capable of. His acting was incredible. You actually felt his stress, his indecision, and his love for his partner in a tumultuous journey between him and the terrorists. Throughout the whole film we felt that we were part of his struggle, not only his physical one, but also that of his mental anguish as he was always trying to do the right thing and bring the plane down and save the passengers. I especially liked the chemistry that developed between Ellis (Gordon-Levitt) and Vedat (Memar). They played off of each other extremely well and the conflicting emotions that they both portrayed were extremely believable and kept us watching. This was a truly wonderful character for Gordon-Levitt and he did it justice.

What else did we like about this film. Well the cinematography was great! At first I was a bit unsure of the camera work and angles, but it actually added to the intensity of the film itself. After doing a bit of google research on the film afterwards, I found that this was not filmed on a set but on an aircraft that the production company bought for the purposes of the film. Thus the tight angles and the sometimes intense close-ups. But all of these features added to the grittiness of the film. Another thing that I really enjoyed was the fact that it seemed like everything being done in the cockpit was realistic. Not like some other films where the crew flips switches at random hoping that it will look believable. I also found out in my “google research” that the pilot Lutzmann (Kitzlinger) was actually a pilot for Lufthansa prior to acting and he ensured that all movements were accurate. A subtle touch, but one that ensured that all would enjoy the film and not have too many WTF moments.

Even though the film kept us riveted, especially once the hijacking was underway, there were a few moments that made us shake our head. In this post 9/11 world that we are in, a few bad guys with broken glass would not have held back over 100 passengers. I am certain that in todays world there would have been a determined rush against them and they would be eventually overcome. (Spoiler alert), Also, after landing in Hannover and the police capturing the fleeing hi-jackers, why didn’t they board the aircraft from behind. The remaining hi-jacker did not have the necessary skills or even the tenacity required to hold them back. He would have been overcome in short order. There is also one last trivial observation about the security camera’s in Berlin’s airport. Would not have the writing on the camera been in German vice English? Also, I have been in most of Europe’s major airports and never have I seen them that unoccupied, even when I had to wait 6 hours through the night for my next flight then what was portrayed here. But hey, it’s a film.

So overall, were we entertained? Yes! This was a film that I did not expect much from, but ended up making us glued to our seats to watch. Levitt’s performance was stellar and the story moved at such a pace to ensure that we would not wander from the screen. A truly great film that I believe was under rated. I would recommend this film to anyone who enjoys a good drama/thriller, and especially anyone who is a fan of Gordon-Levitt.