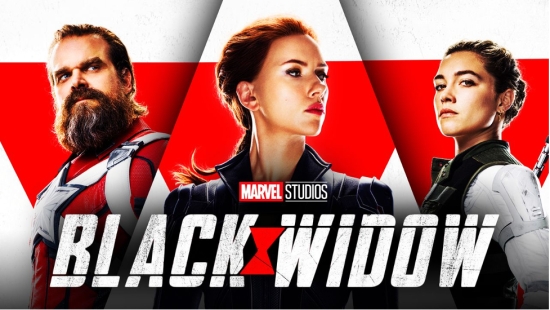 We finally regained power after a massive storm that wiped out most of the power grid in Eastern Ontario, we decided it was time to watch a good movie. One that both my wife and I would find entertaining. With that in mind, we went to the MC universe to find something that we had not yet watched. Black Widow seemed to fit the bill for this evenings entertainment. While this film was released last year, it was postponed several times due to the COVID pandemic so it was at least a year or so in the “can” prior to hitting the big screen.

There are currently 28 films in the MCU with at least 11 more in various stages of development. This film, the 24th in the series takes place shortly after Captain America: Civil War, and it does include some “Black Widow origin” material as well in the form of flashbacks.

The film starts with a typical U.S. Midwestern scene, two young girls, a mother, and a father. Dad comes home for dinner and announces that the family must depart on an adventure. Everyone rushes to the car leaving everything behind as they race to a small private airstrip where a small Cessna is waiting. Just as they board, we can hear sirens in the distance as a bevy of police cars approach and try to block this seeming innocent families escape. After a typical shoot-out that results in many cars shot-up, blown up and/or wrecked, our family flies away with the father hanging onto the wing. What was interesting to note was that we, the audience, discover that the father has some pretty strong muscles that are reminiscent of other superheroes in the MCU. They land in Cuba, and our suspicions are confirmed. This was a Russian family that was in the U.S. as a sleeper cell. Now back in the hands of Mother Russia, the two girls are removed.

Fast forward a number of years and we see a number of assassins working in Morocco. A young blond woman is battling her foes in a spectacular series of stunts and gunfire. At this point, I was hard pressed to try and figure out which girl she was from the start, but by the end of the fight sequence it did become apparent that she was the little “Sister” of Natasha (Johansson). We are also re-introduced to the father, Alexei (Harbour) who is now in a Russian gulag, reminiscing of his glory days fighting Captain America and pretty much shaming all comers in arm wrestling. We have seen how this once lean warrior in the opening sequences has become old, fat, and slovenly. However, he was still capable of fighting when required. Concurrently, Natasha (Johansson) is being chased by her former employer Secretary Ross to answer for her “supposed” crimes that were committed in Captain America: Civil War. I don’t want to go to deeply in the story (weak one that it is) in case you have not watched it. So, with all this in mind, you can pretty much figure out the rest of the movie from there. Family re-unites, fights common foe and each other, defeats enemy and leaves opening for further MCU adventures. Pretty predictable, right?

Now that we have a basic sketch of the film out there, let us look at what was good about “Black Widow”.

Now what was bad about the film:

While on the subject of characters, let us look at the main actors and their roles within Black Widow:

Scarlett Johansson as Natasha Romanoff: I usually enjoy Johansson’s roles for the most part in the MCU. However, this time as the lead character, as mentioned previously, it felt off. Almost like she was not fully invested into the role. Her chemistry was spotty with her supporting characters and at times the delivery appeared wooden. However, having said all that, who can argue when Johansson is clad in either white or black leather? That alone will surely appeal to many fans! I must give props to some of the action sequences, they were well done and I always enjoyed a good fight/combat scene. For some reason, her comedic sequences fell short when compared to her principal co-stars. Not her worst role in my opinion, but not her best either.

Florence Pugh as Yelena Belova: I have to say that Pugh’s portrayal of Yelena was actually the highlight of the film. Her comedic delivery, one liners, and action sequences were extremely well done. We almost fell off the chair when she accused Natasha (Johansson) of being a poser and always landing on 3-point stance and giving a hair flick before leaping into action. My wife has always laughed at these movies when that sequence is performed, and to have another character poke fun at it really enhanced the film for us. Granted it was the writers/directors who put the line in, but Pugh’s delivery made it hilarious. I also enjoyed her performance throughout the film, it felt it had more depth then that of the main star. I had not seen Pugh in anything prior to Black Widow, but I will definitely be on the look for her in the future, for I feel that she has great potential in the industry and am looking forward to what her next role will be.

David Harbour as Alexei: Alongside of Pugh’s performance, Harbour also gave a great portrayal of Alexei, the surrogate father of the two young ladies. Harbour is one of these actors that you see in everything, a supporting actor that probably works in more films then any A list star and has movie credits as long as your arm. To be honest, even though his face was always familiar, I never really started paying attention to him till the NETFLIX series Stranger Things. Looking at his resume, I realized that I have watched him in at least 25 different productions (film/tv series) over the years. Harbour was excellent in Black Widow, he was funny, action packed and was actually pretty integral to the story line. I especially enjoyed his “reminiscing” of previous greatness scenes, they were truly memorable. This was a truly enjoyable role to watch and I look forward to Stranger Things season 4 to see him again!

Rachel Weisz as Melina: Weisz, the ever stoic actress was OK in this film. She was great in the Mummy and a few other roles, but in this one, I found she was OK. Maybe it was the script or direction, but her character was not developed to the same extent of Harbour and Pugh. She could still carry some of the action sequences (maybe she learned it from her real husband, Daniel Craig), but the lighter side was not really present here. As I have said, an OK performance from this talented actress, she has done better in other roles, and I am sure she will in future ones as well.

So, as with every review, now is the question. Were we entertained? Yes, we were. This was really a light film with lots of action and a few good laughs along the way. Was it a fantastic addition to the MCU? No, it was not. This was probably one of the weaker additions to the series, but one that does fill in a few holes in Natasha’s past. (let’s forget about any of the plot holes in this film). In “Black Widow” the real stars were the supporting cast, and Harbour and Pugh made the film worth the watch. I do look forward to seeing Hawkeye (whenever that gets released to something besides Disney) and seeing Pugh in action again. As previously mentioned, I also look forward to seeing Harbour in future roles, as I really think that here is another case of an actor who has been around for ever, but only finds his stride in their late 40’s. Either way, it was a fun film to watch, especially if you are a fan of the genre.