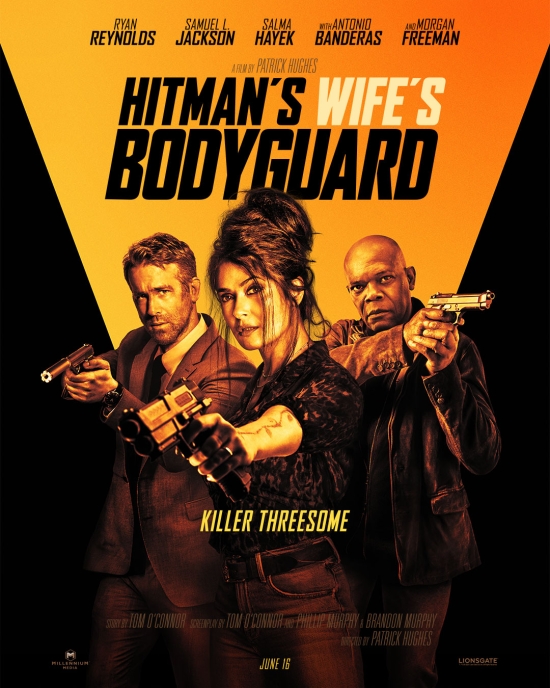 Well here we are again, time to put fingers to keyboard and eke out another review. It has been pretty busy in the nations capital of Canada of late. We have battled the last version of COVID, stores are opening, restaurants are back and soon all other restrictions will depart. Also, here in Ottawa we have had to endure the Freedom Convoy and all that entailed and now that is done, we are being inundated with news of what is happening in Ukraine. It seems that we are reliving the last century all at once, and instead of 100 years, we are trying to condense it to two. So with all this in mind, we decided to try and find a film that had some great stars, and most importantly some levity. The solution appeared to be the sequel to “The Hitman’s bodyguard”. So I grabbed the blu-ray, put it in the player, lit the fire, poured the wine and got ready to be entertained.

Before I get into what I liked, didn’t like, scratched my head in WTF moments, or even the odd shout of “seriously”, lets take a quick look at the slim plotline (very slim plot). The “Hitman’s wife’s bodyguard” is the sequel to the 2017 film “The Hitmans’ Bodyguard” starring Ryan Reynolds, Samuel L Jackson and Selman Hayek in the lead roles. That film had the recently discredited Michael Bryce (Reynolds) becoming the bodyguard to Darius (Jackson). Of note, it must be mentioned that Darius (Jackson) is the reason that Bryce (Reynolds) lost his triple A rating as a bodyguard and was shamed publicly in the occupation due to the fact that Darius (Jackson) had killed Bryce’s (Reynolds) client. Needless to say, in the first film, the two overcome their issues, manage to save the relationship of Darius (Jackson) with his wife Sonia (Salma), patch up Bryce’s relationship with his better half and naturally save the day. So when the sequel arrived we were naturally looking forward to it. The first film was very fun and entertaining and as it starred some of our favourite actors/actresses, so we were totally onboard with this!

The film starts and we see our stalwart hero attending therapy for his mental malaise. With the help of his therapist he decides to take a small sabbatical, and that is when everything starts to go pear-shaped. Lounging on his chair with his noise reduction headphones on, the world around him goes to hell. People are being shot, everything is going crazy while he sits oblivious to it all. Enter Sonia (Hayek) who takes him in hand to explain the latest situation. Without giving out too much and causing spoilers, here is the story in a nutshell. Darius (Jackson), Sonia (Hayek) and Bryce (Reynolds) must save Europe from an evil madman Aristotle (Banderas) who wants to destroy the economy of the leading nations so that he can save his beloved homeland of Greece. Throughout, they must rescue Darius (Jackson), fight Aristotle (Banderas), reconnect with family, that being Bryce Snr (Freeman) and save the day. There are a few twists and turns along the way, a surprise here and there, and of course some laughs where we find out that our heroes will be successful. All in all, a mildly amusing action/comedy romp with some stellar stars. But let us take a closer look at what was good and what I considered bad with this film.

While on the subject of the cast lets look at them at this time.

Ryan Reynolds as Michael Bryce: I have to admit, my wife and I are huge fans of Reynolds. We remember him when he was on the sitcom “Two guys, a girl and a pizza place” and he was pretty much the star of that program. From there, we enjoyed his performances in various films, Van Wilder, Foolproof, Blade: Trinity, Just Friends, X-Men Origins, Deadpool (1&2), and of course the first Hitman’ movie, The Hitman’s Bodyguard. In each film his sarcasm, wit, comedic and action talent shone through. Of course he has made some pretty lame films as well i.e. Green Lantern, but overall we like pretty much most of his films/shows. In Hitmans’ Wife’s Bodyguard, he was following a character that was already made and he just had to follow through with what was created already. He delivered on the action and comedy, but it in this case, it did not seem fresh and new. Maybe it was the Deadpool films (where he does an excellent job) that made this character somewhat lacking. In the action sequences I was almost waiting for an arm to be broken and repaired or appendage to be cut off and regrown. With the appropriate quips to go along with the action. Yes, it was funny at times, but not laugh out loud like some of the aforementioned films that he starred in. Furthermore, the script required him to have a level of sensitivity and insecurity that did not really play out well in the film writ large. As I have mentioned, we enjoyed this character, but not as much as some of his other performances.

Samuel L. Jackson as Darius Kincaid: Jackson is a perennial favorite of ours as well. No one can say “Motherf*&cker” like he can, and most importantly, get away with it. As with Reynolds, this was a character that also was a repeat, so we were not required to have any backstory or build up of the character. His chemistry with all was great as always and his scenes were bang on. I have to say that his facial expressions are also one his greatest assets in the film. With just a glare or a head tilt he can convey numerous expressions or emotions, and in this film he still delivers. One thing I did notice, as Jackson is 70 plus years old now (even if he doesn’t look it), his physical action sequences were reduced quite a bit. But, it still did not take away from the film. Overall, we enjoyed Jackson as Darius, while not his greatest role, it was still fun to watch.

Salma Hayek as Sonia Kincaid: Hayek also returned for this film as Darius’ wife, Sonia. As with the other two, this character seemed to have received and portrayed the most growth. While only playing a minor role in the first film, she was the impetus and driving force of the sequel. It was her desire to help her husband and start a family that initiated the adventure. As with the other two principle characters there is great chemistry between Hayek and all the principal stars in this film. Hell, she has starred with all of them in the past, so there was proven chemistry already in place. Her character is still a spitfire of a lady and she has learned to curse like Jackson. In this film, Hayek is actually my favourite as she is playing a role that is not normally associated with her style. Yes, she has been the heroine or femme fatale, but not with the same intensity in her action sequences as in this production. A good performance by Hayek that helped ensure that this film was enjoyable.

Antonio Banderas as Aristotle Papdopolous: For me, this is where the film starts to lose it. I could not buy him as a Greek Tycoon/criminal. His Spanish accent cannot be hidden! As it was a European set film, just keep him true to form and make him Spanish, not Greek. It actually made me laugh a bit, though I don’t think that this was the intent of the directors/producers with this role. However, having said all that, he did play an ok villain, though I prefer him in the heroic role. While his chemistry was fine, I found his role was lacking and he could have been utilized better in this production. For Banderas, this outing was not his best by a long shot, however, nor was it his worst.

Morgan Freeman as Michael Bryce Senior: Here was a surprise casting and character for me. It did get the requisite laugh when he was introduced and allowed for some comedic interaction between the principle characters. But, as with Banderas, I found he was under-utilized in this film. Not only in scenes that required gravitas, but also in the comedic sequences as well. He was not able to stretch his talent to the full width and breadth that he is known for. An accomplished actor, for me, this role was just one that was done for friend (Apparently he has known Jackson since they were young actors starting in the biz). I don’t know if that was the case, but as with Banderas, this was not his finest role at all. His scenes while important and mildly effective could have been so much more in my opinion. However, Freeman is still a fantastic actor over all and you just can’t but help but being entertained when he is on screen.

So, now comes the question. Were we entertained? Yes we were. This film is light, has enough action and comedy to keep you watching and has a phenomenal cast, even if they were not employed to their best capabilities. While this film left an opportunity for a sequel open, I really hope that they don’t. It was stretched enough as it was for this outing if they hit the well one more time for these characters it might one time too far. Part of the reason is that some of the principal characters are starting to get quite a bit older (Jackson) so that the believability and possibility of the film would become even more ridiculous and would take away from the success of the first film (and the limited success of the sequel). Let the characters and franchise come to a stop with this film and call it a day. Would I recommend this film? Actually, yes I would. Especially if you are fan of the original and the principal stars. Don’t expect Deadpool or Shaft, but just enjoy it for the ride that it is.