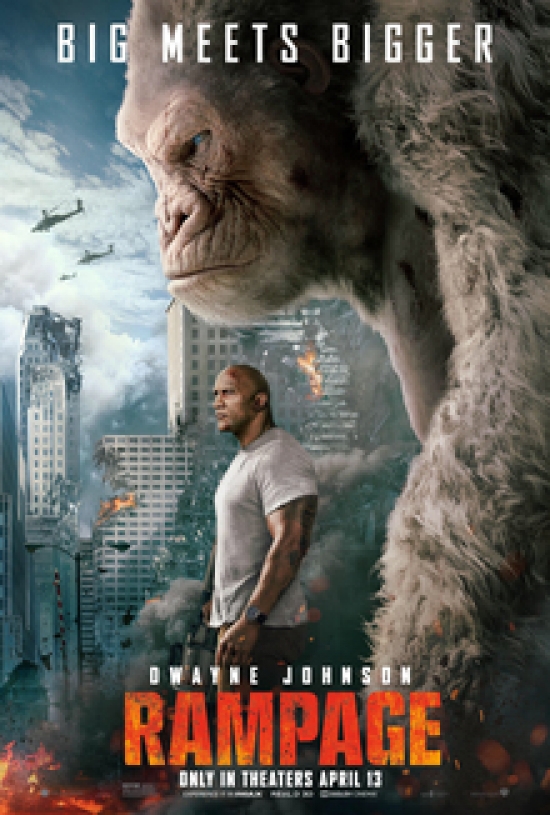 Overall, my wife and I enjoyed the film, primarily due to the cast and the amazing special effects. However, it must be said, that while watching the film, you must put aside all reality and beliefs and just sit back and enjoy the ride.

Before we give the good and bad of the film, lets take a quick look at the plot. The Wydens (Malin Akerman and Jake Lacy) run a bio genetic company that specializes in gene manipulation. When one of their experiments on their space station goes awry, the crew member and the experiments are jettisoned from the station. During the descent, the life pod disintegrates and three canisters containing genetic manipulation material is scattered to three sites across the United States. One canister lands in Florida in the glades, another in Wyoming, and the last in a San Diego wildlife sanctuary. As this is a Sci-Fi (ish) film, the canisters burst and the first thing that they encounter gets morphed into something that is huge, extremely angry and wants to kill and eat everything it encounters. The animals that are morphed are an Alligator, a Timber wolf and an albino Gorilla.  By chance, or potentially dramatic foreshadowing, the Albino Gorilla (aka George) in the San Diego wildlife sanctuary is friends with Okoye (Dwayne Johnson) besides being a primatologist, he just happens to be ex-special forces, and has numerous other specialties that will be revealed as the movie progresses.

Once mutated, these creatures are summoned to Chicago by the evil Wydens, leaving a trail of carnage and destruction in their wake. Okoye (Johnson) and his new companion Dr. Caldwell (Naomie Harris) are in pursuit to stop the destruction, save the world (ok Chicago) their friend George (Albino Gorilla) and put the hurt on the Wyden’s and right everything that is wrong.

Along the way the newly mutated animals encounter a mercenary team sent by the Wydens (Akerman and Lacey) the army, the air force, police departments and various other entities that were sent to stop these creatures. As Okoye (Johnson) is friends with the gorilla, and they are tight, (hell, he even taught the gorilla sign language so that they can communicate, another secret skill that the Rock has!), he figures that he can hook up with George the gorilla and that between them they can stop the other two creatures and save the day! This is with the help of the creator of the pathogen Dr. Caldwell (Harris) and a government agent, Harvey Russell (Jeffery Dean Morgan). That is pretty much the plotline in a nutshell.

Starting with Dwayne Johnson, this was a movie with his standard formula, action, CGI, one liners, raised eyebrows and bicep flex’s while still providing solid entertainment. As with pretty much all his movies, his performance is very enjoyable. However, the character of Okoye was kind of sparse, he is a primatologist, ex special forces or SEAL, can fly a helicopter, knows sign language, can bench press a buick….you know, pretty much a standard “Rock” character!  Besides having a multitude of talents, his sole role in this film is to save the day, with trusty sidekicks of Caldwell (Harris) and George, the albino gorilla. Johnson (Okoye) delivers as always, and even taking all the slim plot and storylines, he was entertaining and continued to be the combination action/comedy star that he has come to be known as!

Dr. Caldwell (Naomie Harris) does not really do much to either enhance the story or hurt it. Her raison d’etre is to be the originator of the pathogen and knows where the cure is. She anxiously follows Okoye through the adventure providing the straight man to his one-liners while providing the necessary clues/hints on how they can stop the beasts and also cure them. Her one main contribution is saving one vial of the antidote so that George the Gorilla can be cured from it’s intense anger and join Okoye (Johnson) in battling the other two monsters (Timberwolf and Alligator).

Malin Akerman and Jake Lacey were the evil Wydens. As the treacherous brother and sister combination, they ran a biochemical company that appears to be huge. Their company developed the drug that Caldwell (Harris) created and were planning to use it in nefarious ways. Claire Wyden (Akerman) was the stereotypical villain, they even dyed her normal blonde locks darker so that she could be more evil…for how can have you have a villainess if she is a cute blonde…no she must have dark hair! She was ok in this role, nothing spectacular. She is more suited to the “cute” roles that she normally plays, for example her parts in the following; Heartbreak Kid, Couples Retreat, 27 Dresses, The Proposal to name but a few are her strong suite. While looking at IMDB, it seems that she is now doing more Television or streaming roles than movies. As mentioned before, she was ok, even though she was the villainess, it was the creatures who were the real bad guys in this movie. On the other hand, Brett Wyden’s (Jake Lacey) part was pretty minimal. He was there as the stupid but evil brother, he played the stupid part well, but nothing else of import or even a viable contribution to the film. I looked at his resume on IMDB, and there was really nothing that stood out as memorable or even something that I had really seen in the past. So basically, he plays a good filler character, someone who could be discarded or killed of easily.

Jeffery Dean Morgan as the government agent Harvey Russell. Well…let me see, his character was one dimensional…kinda like the rest of the script. But it was funny to watch. His accent…I am thinking was supposed to be Texan was not very good, and his lines were kind of hokey. I prefer his acting in the TV series’; Walking Dead, Magic City, and the Good Wife. In all 3 series I thought he was great and really added to the program or storyline that he was in. Here…he was also a filler that would go between the Rock, the army and the various CGI characters. However, he did play a role in aiding Okoye (Johnson) in the end.

I do have to give props to Jason Liles who was the actor behind George the Gorilla. We enjoyed his performance so much that we even watched one of the special features on the disk which displayed how they brought George to life using Jason and a motion capture suit. He did a bang up job, while he may not look or act like any gorilla I saw at a zoo, he brought the animal to life for the audience and gave it character, humour, compassion, anger and what was the most entertaining, sarcasm. The special feature also displayed how he controlled the movements and presented his emotions to the CGI screen. Of interest, in this film he was the only motion capture character, the Wolf and Crocodile were strictly CGI. We believe that by having George drawn from a motion capture actor, it provided the extra emotion that would not otherwise be present. When CGI is strictly the tool, it tends to lose some of the human emotion, and actually can look more fake (if that can be possible).

What did I think about the film? Well it is a movie starring Dwayne “The Rock” Johnson, so I knew what I was going to get right out of the gate. It would have lots of action and cheesy one liners, but still make us laugh out loud and be entertained in the process. Rampage did not fail in this aspect, once you remove your thinking cap and just enjoy the film for what it is, mindless entertainment, it is ok. Do not try and analyze for realism or science…you will get lost in the first 5 minutes. But it did deliver what was forecasted when I purchased the film, we were entertained!

If you are interested in other films/shows from the starring characters, please check out the following: