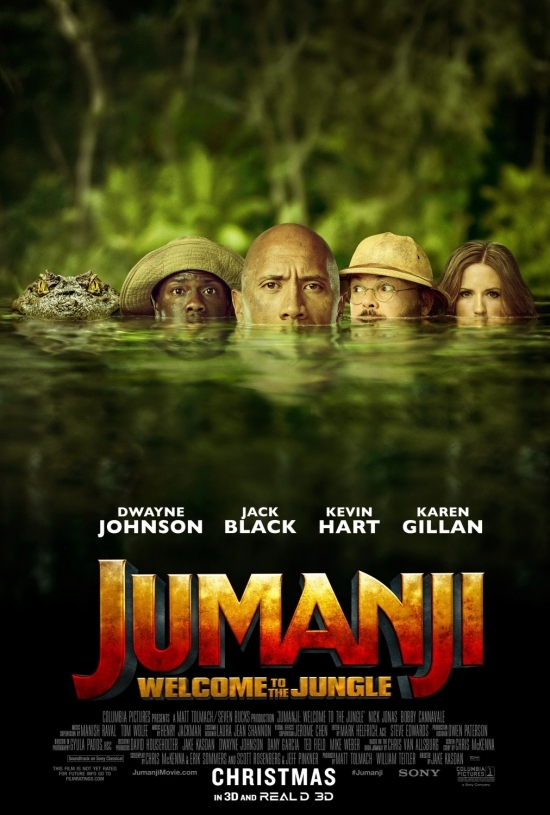 As I mentioned in my first review, I am an avid fan of movies and television. In that light, I have purchased countless movies and TV shows. So much so, that I have literally thousands of DVD’s and Blu Rays in my collection. I started collecting VHS tapes in the 80’s, made it to a couple thousand, then DVD’s came on the scene. So what did I do, not only buy new releases in DVD, but also replaced my old VHS tapes with DVDs whenever I could find them. Then technology got me again with the advent of Blu ray; guess what happened, same thing as before, bought new releases in Blu Ray and replaced all my old films again. For some films, I have now purchased them 3 times, no wonder home movies provide such a lucrative income to the studios and actors!

Well, Friday nights are movie nights in our house, and we finally got around to putting Jumanji: Welcome to the Jungle in the Blu-Ray player, this was of course after trying another bargain bin movie just before -  that one did not entertain us at all and I stopped it after 15 minutes. Like I said before, we have to be entertained! After ejecting and throwing the other film in the garage sale pile, I grabbed the next film and put it in. Naturally my wife said that she hoped it would be something good, while I promised her that she would enjoy the film, In this instance, I kind of cheated as I had watched the film a few years earlier while on a work trip to Europe, so I knew that she would like it!

Jumanji (“2” if you will) has all the right parts for a thoroughly enjoyable film, action, great special effects, a stellar cast and a time honoured formula. We knew at the start that, they would all succeed, and win the day, hell, we watched the first film years ago with Robin Williams, and were completely prepared that the storyline would be pretty much repeated.

The story line for Jumanji 2, is much like the original. In the original, a kid (pretty much a loner, kind of geeky etc) finds a game, rolls the dice and gets sucked into the world of Jumanji. This kid grows up in this fictional world, survives and waits for someone else to pick up the dice and enter the game. Once they enter the game, they must play to the end before all can again be right with the world. As it was a Robin Williams film, and he was definitely a force of nature, its chaotic, funny and had some great special effects for the day. As this is a review of the sequel, not the original; to summarize, everyone succeeds in the end, all becomes right with the world and Robin Williams finds his place again as do the remaining characters.

Now for Jumanji 2, it follows the previous model; a youth finds a board game (that magically changes into a Nintendo like game, starts it up and gets sucked into the world of Jumanji. Then like the original, it sits for years till a new cast of characters pick up the game to finish the roster. The youths are pretty stereo typical of the genre, you have the jock, the nerd, the introverted geeky teen, and the homecoming queen.  After each kid screws up in their own way, the are put on detention (kind of a Breakfast club homage), and are sentenced to some menial labour that of course will never get accomplished. While in detention, “Fridge” finds the game console and naturally the “nerd” (Spencer) hooks it up and they each grab a hand set, select a character and get sucked into the world of Jumanji. At this point, they all become the avatar’s of the characters that they have chosen.

This is where the movie becomes fun! Dwayne “The Rock” Johnson has achieved what very few action stars have managed. He can portray an action star, a comedian, the hero or villain, all with same effort as it takes him to arch his eye-brow. Schwarzenegger tried and failed to become this diverse! As Johnson is now the new “Spencer” he is joined by Kevin Hart, Jack Black and Karen Gillan. Kevin Hart is a talented comedic actor, but in my opinion, we find that he always works best when he is paired with Johnson. They have a fantastic chemistry, they play off of each others strengths and always deliver a great performance. When he is the lead for a film, he can become annoying if left to much to his own devices.  Gillan (Martha) was relatively new to us (we actually had to look her up in IMDB to see what she had played before), and as for Jack Black, I can take him or leave him in his various roles, usually leave him. His characters are always variations of the same, “the loveable loser who seems to have it all together in the end”. However, I must say in this case Jack (Bethany) while similar in his delivery to other films was actually enjoyable, he played the preppy girl in the middle age guy pretty well and I think I saw my wife snort wine out of her nose when he tried to go to the bathroom for the first time as a guy!

Now back to the plot, the 4 avatars meet up with “Nigel” who informs them that they must place a special jewel back into the Jaguars statue eye to save the world of Jumanji from the evil Van Pelt (Cannavale).  Both Nigel and Van Pelt are pretty two dimensional characters, but what do you expect, they are part of the game so no effort is required to build on them, nor is it required…they are actually just fillers and guides to the main characters to justify their actions. Remember, the world of Jumanji is just a video game in this instance!

Just like any other role playing game, the avatars must perform certain tasks, achieve various levels and continue on so that they can save the day. In the midst of their travels, they come across Alex (Nick Jonas) who was the boy at the start who found the game and started off the game. Jonas (who was probably pining for Priyanka Chopra to save him for not a bunch of geeky kids (or game avatars) hooks up with them to complete the team, thus balancing all their strengths and weaknesses. Needless to say, as a team, they manage to save Jumanji, defeat Van Pelt, save the day and return to their lives. Of course, now that they are all wiser and more in-tune with each other…they are now solid friends and accept each other for who they are…basically the moral of the story, someone’s strength could be your weakness (and vice-versa) and accept everyone for who they are, and together you can always save the day!

As we mentioned earlier, we knew they would win, everyone would make it and evil would again be defeated! Yes, this film is a tried and true formula, but it is entertaining! In our house, we were entertained, we laughed, (snorted wine out of our nose), actually liked Jack Black in a role and, and actually discovered that we had watched movies with Gillan in it before (though we did not recognize her at the time) and enjoyed the antics of Johnson and Hart. The special effects were great, not over done, the chemistry between all the characters worked, this was an enjoyable film that did not require any deep thought or analysis.

if you have not seen Jumanji: Welcome to the Jungle, and you need a few laughs, I would recommend you put in your dvd/blu ray player, stream it from Netflix (or some other streaming service) and sit back and enjoy the ride. You will be entertained, and that is the point of any film or show!

We rated Jumanji: Welcome to the Jungle as a ……