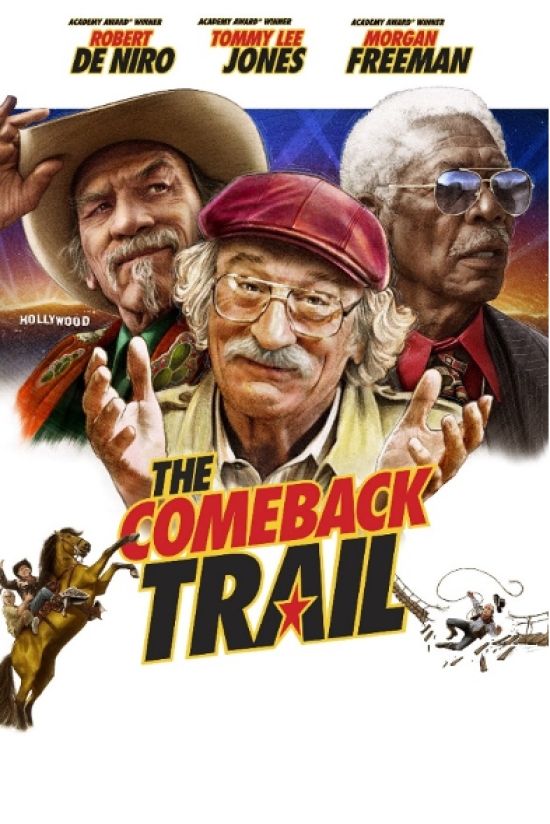 Another weekend has arrived and we decided to take a break from all of our renovations and enjoy a film. Sure, we have watched some in the last few weeks, but I have not had the energy to take up the keyboard and write a review. For example, we watched a few half decent films that I would recommend i.e. Spiderman: No way home and Army of the Dead. Both were pretty good films if you are into the genre. This week we wanted to try something that was not a superhero film, or a zombie slasher (Finding films that are not the aforementioned are becoming harder and harder these days).

So with that in mind, we started scanning what Amazon Prime had to offer. We came across the “The Comeback Trail” starring 3 of our favourite actors, specifically, Tommy Lee Jones, Robert De Niro and Morgan Freeman. With a cast like that, how can you lose! We poured the wine and started the film.

Now you may wonder, what is the “The Comeback Trail” about? It is a light-hearted comedy about a down and out movie producer, Max Barber (De Niro) and his nephew Walter Creason (Braff) who are struggling to stay afloat. Their company, Miracle pictures makes nothing but duds, they owe money to the local gangster, Fontaine (Freeman), and no matter what they do, they can’t seem to get a break.

They do have one ace up their sleeve, and that is a script that one of Barber’s (De Niro) old protégés, Moore (Hirsch) wants for his own movie company and is willing to give them a lot of money for the it. This cash will not only pay off their debt to the local crime lord, but give them enough money to really make something. Barber (De Niro) does not want to part with this script as it is his one true project that he knows will make it big. However, he feels that is he is up against a wall. That is, until he figures out that if he insures his actor for a film and that individual dies, they can collect a payday from the insurance company.

So after a humorous trip to an retirement home for actors, they come across Duke Montana (Jones), a washed up actor who did primarily westerns and is now relegated to cheap used car commercials. What makes Montana perfect for Barber was that they caught him in the act of attempting suicide. After convincing Montana (Jones) to join the project, as in Barbar’s mind this was almost a win-win for both. Montana (Jones) could die, and he would get the insurance money.

Barber (De Niro) at this point becomes almost Machiavellian, he finds an old movie set, talks Fontaine (Freeman) into fronting more money, and hires an inexperienced Director, and finally selects the worst script in his office to produce. All these things are in place, he is positive that he will succeed in his plan.

At this point, act 2 of the film commences. From here on out, it sort of reminded me of Wiley Coyote and Roadrunner from the old looney tune cartoons. No matter what Barber (De Niro) tried to do to end Montana (Jones) life, it always backfired and Barber would either be the recipient of the plan or an awesome scene would be shot for the film. I won’t go into it any further, but needless to say, everyone wins in the end of this film and a few laughs are had along the way.

So, what did we like about the film: Basically everything; it is light, takes nothing serious, takes a few potshots at the Hollywood establishment, and has some really good actors in the key roles. Of course, this is not an Oscar nominee or even capable of remotely winning an award, it is just a nice way to pass a few hours and enjoy a laugh or three. The premise while thin and not really complicated is enjoyable, and the actors all have a great chemistry with each other. While we are on the subject of cast, lets look at the main stars of “The Comeback Trail”.

Robert De Niro as Max Barber: De Niro is a family favourite. I am hard pressed to find a film with him in it that I don’t like. Even when he was with Efron in Dirty Grandpa, I thought he was hilarious. He has embraced his age and continues to act accordingly. Not like some former action stars who try to make us believe that at the tender age of 70, they can still kick ass like there is no tomorrow. In “The Comeback Trail” De Niro gave an amusing performance that allowed you to escape for a few hours. Yes, the scenes were at times cartoonish, and the plot thin, but at least it feels slightly original and it did not have a superhero dropping into a three-point stance before a fight. Those facts alone made it enjoyable. His chemistry with his co-stars, especially Jones was great! To us, this was another good performance by De Niro, while it was not the calibre of Deer Hunter, Goodfellas etc, it was still an enjoyable watch.

Tommy Lee Jones as Duke Montana: As with De Niro and Freeman, we are really big fans of Jones. For the most part he makes really good movies and his characters are stellar. He has also embraced his age and this role was perfect for him. As the down and out Western actor, he portrayed the character to a tee! He was extremely believable in the role, and his dead pan delivery of lines added to the humour in all scenes. His chemistry with all his co-stars was great, and really added to the films enjoyment. We really liked Jones in this role and hope to see him in similar ventures in the future.

Morgan Freeman as Reggie Fontaine: Even though Freeman’s role as Fontaine was not really given much screen time, his character was integral to the plot. As the friendly neighbourhood gangster, Freeman managed to convey the seriousness of De Niro’s predicament without going over the top. He also managed to have a few one liners to make you laugh and further enjoy his presence. Great chemistry between the two main actors. As with De Niro and Jones, not his best performance, but still a nice addition to his resume. A thoroughly enjoyable role and character.

Zach Braff as Walter Creason: While I am not a fan of Braff and have only seen him in a few roles, I found his contribution to be ok. As a supporting character and role, his contribution was important but not in such a way to make him a vital actor in this production. For some reason, he really reminds me of Ray Romano and I found it hard to watch this without thinking it should be Romano delivering the lines…who knows, maybe it would have been better with him in it?

Emile Hirsch as James Moore: Another actor that I really don’t care for, Hirsch’s performance while adequate provides the impetus for the Barber (De Niro) and his plan for a future. Personally I found the character annoying, but I am sure that is what the director/writer was going for. So in that case, maybe it was a better performance than I gave him credit for.

Kate Katzman as Megan Albert: Katzman was new to me and even when checking IMDB, I confirmed that there was no role/character/show that she had taken part of that I had seen in the past. However, having said all that, we liked her character. It fit with the plotline and tone of the film. She did an admirable job playing against the major stars that she was supporting. We look forward to seeing her in future productions.

Now comes the question, were we entertained? Yes, we were. “The Comeback Trail” is a light film with enough laughs to keep you going. Even though it reminded us of a cartoon, specifically the Coyote and Roadrunner with all the botched attempts, it’s plot was somewhat refreshing and enjoyable. While this is not an Oscar or award contender by any stretch of the imagination, it still made us laugh and escape for a few hours. One thing we really liked about this film was that people played the ages that they are, not what they wished they were. Would we recommend this film? Hell yes! Especially if you are a fan of light comedies and the three principal stars! No doubt in my mind that you will get a kick out of it as much as we did!

If you are interested in any reviews of films that have the principal cast, please check out the following Reviews on “Was I Entertained”.