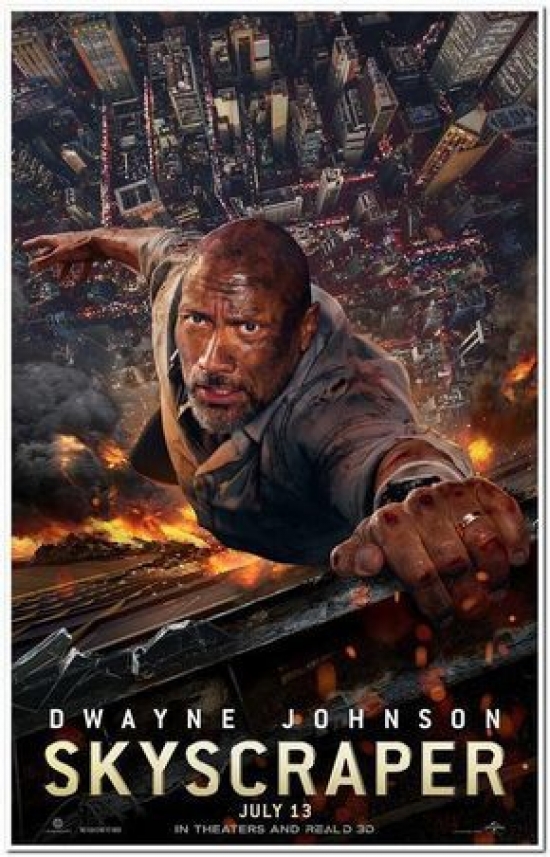 As the world and our nation is still under “quarantine” due to the COVID virus, we still look to films and tv’s for a chance to escape. For this week, we selected the blu-ray “Skyscraper” as our means of escape from the doldrums of confined life. Skyscraper stars Dwayne “The Rock” Johnson and Neve Campbell in the principal roles. This is the 3rdfilm that I have reviewed with “The Rock” as the lead, not that his films are the best in the industry, just that he makes a lot of films, and they are entertaining in almost every case. After watching the film, Skyscraper is probably on the lower end of the “The Rock” entertainment spectrum. It has loads of action, fantastic special effects, but a cast of characters that lacks chemistry and a plot with more holes and gaps then a brick of swiss cheese.

Speaking of the plot, what is Skyscraper about? In this film, The Rock is Will Sawyer, a Veteran and former Hostage Rescue team member who is now employed as a security consultant. His job is not really defined at this point (or really throughout the film). Is he a risk assessor, Rent-a-cop security, or in charge of a burgeoning security firm? It was kind of hard to pin down. However, his career choice is a result of a hostage negotiation/rescue gone wrong, where he and the team were either killed or wounded. In Sawyer’s case (Johnson), he lost a leg. As a Risk assessor or security specialist for his own company, his close friend and former team-mate Ben (Schreiber) sets him up with this lucrative job. In that light, Sawyer and family travel to Hong Kong to provide a security assessment of the tallest building in the world, and I think hired on as head of security (not really defined here). The Pearl, as the skyscraper is called, dwarfs anything else on the planet for it’s design, height and opulence.  Will (Johnson), his wife Sarah (Campbell) and children Georgia and Henry are also the first occupants of this monstrosity.

Will (Johnson) gives the Pearl a passing grade, the owner Long Ji (Han) is very happy and presents Will with a tablet that is keyed to his face and gives him full control of the building and all its safety features. With the “golden ticket to the chocolate factory” in hand, Will (Johnson) and Ben (Schreiber) head out while the family goes to the zoo to see some Panda’s, the tickets which were a gift from Ben. While departing the skyscraper en-route to the off site security/control facility, Will and Ben are accosted by a thief who steals Will’s man-bag, with the hope that the tablet is contained within. A chase and scuffle ensue, however, Will (Johnson) is slowed down by his artificial limb and the miscreant escapes. During the scuffle, Will (Johnson) did not escape unscathed, and both Will (Johnson) and Ben (Schreiber) return to Ben’s place to discuss. It is at this time that the nefarious plot is revealed. Ben (Schreiber) who is working for Botha (Moller) aka the movie “bad guy” discovers that Will still has the almighty tablet that controls all and a knock-down drag out fight between the two behemoths commences. I gotta say, that these guys do a great fight sequence, both huge guys, they totally trash the place and even though Will (Johnson) is an amputee, it does little to slow him down in the fight.

To quickly speed up with the plot summary, after finding out the Ben (Schreiber) is a bad guy, and that he (Will/Johnson) has been set up, he rushes back to the Skyscraper to see that it is on fire around the 90thfloor. Unfortunately, Will’s (Johnson) family returning back early from the Zoo are situated above the fire along with a team of nefarious individuals led by Botha (Moller), and his boss, Long Ji (Han) with his own personal staff and security. Will (Johnson) goes into “Rock” mode, battles police en-route to the Skyscraper, the bad guys, and of course the burning skyscraper itself. Along the way, we find out the cheesy reason why it was taken over and the reason behind everything that has happened to him and his family. Ultimately Will (Johnson) saves the day, his family, his boss and the building itself.

That is Skyscraper in a nutshell without giving out too many spoilers or hints. As I mentioned before, this movie was entertaining, but not really good if you know what I mean. Of course with the Rock in a film, you will have large explosions, larger than life stunts, raised eyebrows, Bicep flexes and incredible stunts. This is what we expect in one of his films, and he delivered as always. But, and I have to say a rather large but, the plot, character development and dialogue was weak. Will Sawyer (Johnson) is what he always is, you are introduced to the reason he has all the skills in the first 5 minutes of the film (Hostage/military etc) and why he has lost one leg. The remainder of the characters are only glossed over. For example, his wife Sarah (Campbell), she is the doctor who saves him, so of course they fall in love and have a family. But that’s not all, information is later provided that she was a military doctor and did several tours of Afghanistan. That must explain her fighting skills later. The remainder of the cast is also very one-dimensional, right from the billionaire building owner (Long Ji), to his children, Ben, Botha and the Police Inspector Wu. Dialogue is pretty stilted and even kind of simplistic.

Dwayne Johnson as Will Sawyer: As I have mentioned not only in this review but in others as well. The Rock pretty much always delivers entertainment in any film. Even when the character development is lacking or the dialogue is weak, he can still carry the film enough so that you feel that you were entertained in the end. In this film, being an amputee was another hurdle for him to battle along with the fighting etc. Some of the stunts were a little far fetched, but hey, it is the ROCK, so just shake your head, take a sip of whisky and keep watching. The stunts only get better and more far fetched, but you will have fun. Overall, he was the Rock and as always carried the film (in this case he had a lot to carry), so that you were not too disappointed, and as mentioned earlier, not one of his better films.

Neve Campbell as Sarah Sawyer: Campbell did not really have much to play with here as far as a character. As the wife and mother protector of her children she was OK. She can present a tormented face with a touch of weepiness at all times, and if required scream repeatedly. Since her heyday in Party of Five, The Scream Franchise and Wild Things, she does more guest appearances in various television shows instead of carrying a film on her own. As previously stated she was OK in this film, nothing spectacular here, but then again, she was playing against a burning skyscraper and the ROCK…kinda hard to outshine them. Overall, she is not a bad actress and I really liked some of her earlier work, and I hope to see her in more feature films as time progresses. I believe that now that she is a bit older and mature she can play a variety of roles that were previously unavailable to her.

Chin Han as Zhao Long Ji: Not much of a character here, he is the multi-billionaire with an inferiority complex (hence the huge building). His character is one-dimensional, there is no real depth to him. He has info on the bad guy to save his building, and it appears that he would cut corners to make sure his dream was built. But other than that, not much else to him. He was far better in supporting roles, for example Dark Knight and Contagion.

Rollan Moller as Kores Botha: speaking of one dimensional characters, Moller as Botha was pretty much a cardboard cut-out of a bad guy. He had no depth, and very little screen presence. For a rip-off or homage to Die Hard as this film was, the villain could have been more like Hans Gruber to give the audience something to bite into, and maybe even cheer for the bad guy (I do this sometimes if the villain is extraordinary!).  If you watch the film, Botha (Moller) does not really do much but grimace, shoot his weapon and demand the USB key. Other than that, he is pretty useless and ends up just being a punching bag and target for Will (Johnson).

Pablo Schreiberas Ben: A former team-mate, friend and colleague Ben is the trigger for what happens to Will Sawyer, his family and the building. Provided very little screen time, there is very little time to learn about his character besides what was just mentioned. It appears that he does have a soft spot for the family and tries to arrange an excursion for them so that they will not be present when everything goes pear-shaped. But, that is about it. His great contribution to the film is the fight that he has with Will (Johnson) in his apartment. However, as would be expected when you watch a film with the Rock, there is no chance that he will win. Not really contributing much else to the film, Schreiber’s performance definitely did not leave a lasting impression after the film was completed.

Mckenna Roberts as Georgia Sawyer and Noah Cottrell as Henry Sawyer: As the spawn of the Sawyers, they add little to the film except prove that parents will take care of their children. I don’t remember seeing the kids in any other films, they did ok, especially with some of the action sequences, but really nothing extraordinary.  It might prove interesting to see what else they star in as they get older.

Overall, the storyline is a melange of other films, specifically Die Hard and the Towering Inferno. However, in this case, Will Sawyer is no John McClane, Botha is not Hans Gruber, but I must say, the effects and the building itself are much better than the (1974) Towering Inferno’s office building.  Action was paramount in this film, the CGI and the stunts were great. If you are a “Die-Hard” fan of movies starring the Rock, then I would recommend this for an evenings entertainment. But only if you don’t mind a weak story line or characters, if you are not a fan…then I would move onto another film to while away your time.

If you are interested in other films starring the main cast, please consider the following: