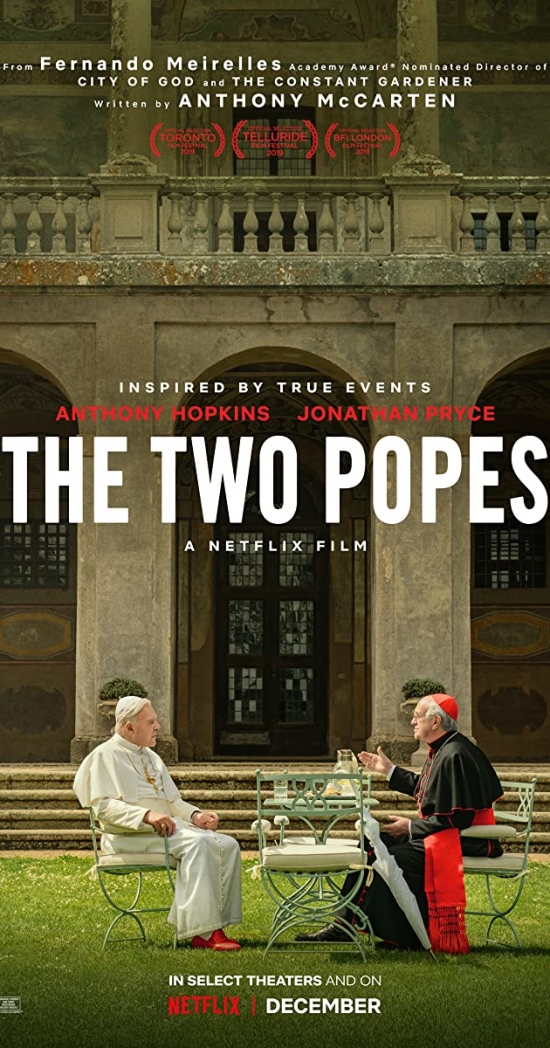 As per normal on a Friday night, I almost always reach for the next blu-ray in the stack of movies we have not yet watched. We started off with Colossal starring Anne Hathaway and Jason Sudekis. However, this bargain bin movie was also a Colossal waste of time! After sitting through 15 minutes of previews of movies I had never heard of, it started…now usually Hathaway makes a some entertaining movies, but when she makes a piece of fecal matter, it is trash. There is no two ways about it. We lasted about 15 minutes before I pulled out the film and threw it in the garage sale pile. Will I ever learn about the Bargain bins…they are there for a reason! Well after that dismal beginning, I needed a drink, so grabbed a bottle of Cabernet and searched through Netflix to see what was on. After about 15 minutes of clicking through the selections (as we all know, NETFLIX search engine sucks!), we came across “The Two Popes”. I remember during the Oscars that both Pryce and Hopkins both received nominations for this film, and a few friends told me that they really liked it. So what the hell, fill up the glass of wine and start the film.

We are not religious in any way shape or form, so even with the recommendations from our friends and what I had read to date on the film, we did have some trepidation before starting it up. In brief, “The Two Popes” is a compelling story of Pope Benedict (Hopkins) a traditionalist in the catholic church and Cardinal Jorge Bergoglio (later to become Pope Francis) a reformist, and how the two interact throughout several years. This film also portrays their separate views, as well as their very two distinct personalities. In short, Cardinal Bergoglio (Jonathan Pryce), is a Cardinal from Argentina who finally decides to retire from his role as Cardinal of Argentina. He sends a letter to Pope Benedict (Hopkins), requesting his approval for retirement. The response he receives is actually a request for him to come to Rome so that the two can chat. However, in the opening of the film, it is also revealed that Bergoglio (Pryce) was actually the main competitor previously for the papacy against Ratzinger/Benedict (Hopkins) years ago. Bergoglio believes that this chat will be about his retirement, and he is to find out that it is that and so much more.

Once in Rome Bergoglio (Pryce) and Pope Benedict (Hopkins) meet to discuss this unusual request from a Cardinal. Their personal styles collide, and it is revealed that Benedict (Hopkins) wants Bergoglio (Pryce) to replace him so that he can retire. A pope wishing to retire would be a first in hundreds of years, and with the climate in Rome and the church, especially in the western hemisphere, it could prove to be detrimental. In the meantime, Bergoglio (Pryce) is adamant that he wants to retire as well. This results in both men finding themselves all over again, plus each man revealing personal secrets and discussions on how the church has at times failed its parishioner’s to save itself, specifically in the scandals of sexual abuse that were permeating at that time. Over the course of the film, they revealed, they grew, and they learned from each other. As this is historical fiction, no sense in hiding the end, Benedict (Hopkins) retires, and Bergoglio (Pryce) becomes the next Pope, and it appears that they become good friends. In a nutshell, that is the movie, The Two Popes.

Were we entertained by this film? Yes, very much so! As mentioned previously, neither my wife or I are religious, but we can enjoy this film without the religious backdrop. The two main characters Bergoglio (Pryce) and Benedict (Hopkins) were amazing! We can truly see why they were both nominated for various Oscars. Their performances were solid and the way that they played off of one another was like a finely tuned engine, never missing a beat and giving you the most for your money! The script was fantastic, and the dry humour portrayed by both main characters was bang on.

With respect to Anthony Hopkins, we are hard pressed to find him in a bad movie…well ok, he was in a couple of stinkers (Noah comes to mind and a few others) however, his acting was never in question. He may have chosen some bad roles in some questionable films, but his acting was not the weak portion of any of these films. With the Two Popes, he is in fine form, delivering his dry wit and superior acting skills to help make this a wonderful film.

Jonathan Pryce as Cardinal Bergoglio was also fantastic and his Oscar nomination was very well deserved. As mentioned previously, they played off of each other splendidly and his own humour was extremely vital to the story and the chemistry between the two actors. Pryce’s resume is almost as impressive as Hopkins, as his body of work is quite large as well. While he may not have had some of the blockbuster’s as his co-star, he still participated, led and supported in a fine selection of films and TV shows. For me, most recently, his character in the Game of Thrones as the High Sparrow was extremely enjoyable. Together, these two actors ensured the film was entertaining and thought provoking.

What else did we like about the film, well besides the script and the main actors, we really enjoyed the cinematography. Having been to Rome several times it was great to see certain aspects of the city that we walked along included in the film. What we found interesting was the scene in the Sistine Chapel. At first, we were like “wow, we were there, isn’t it great to see it on TV as photo’s were forbidden.” Then we watched a few more seconds. ”Hey, it is not that big, something is wrong here”. I looked it up and apparently NETFLIX recreated the chapel, albeit quite a bit larger then reality…but it did give us a pause during the film. Additionally, the grounds around the Pope’s summer home were truly breathtaking and it does look like anyone can visit them on a tour…hmm… something to think about on our next trip this year to Rome.

Overall the film was very well made, the main actors were amazing, and it was highly deserving of any and all accolades. It did not dwell to much on the religious aspects, and it did take some historical liberties with the main characters (i.e. the supposed romance of Bergoglio when he was young was actually when he was 12 years old and just a crush), but it still made for an entertaining movie. As previously mentioned the cinematography in and around Rome was awesome, and brought back many memories for us. Would I watch it again, yes, I think we would, for I am sure that there were other nuances and scenes that I missed the first time around. Would I recommend this film, yes I would! It may not be for everyone, but take it for what it is, a film about 2 men, their voyage into self discovery and a friendship, that might not have happened in other circumstances. Historical liberties aside, there is still enough fact contained within the film to provide the viewer context on the reasons behind choices made within the Church, and maybe even a touch of insight. But it is up to you to take what you will out of the film. So, if you have a few hours to kill, want a film that does not have any gratuitous violence, swearing, nudity etc., maybe a little history and will probably make you feel good in the end, then “The Two Popes” is for you! So grab a bottle of Amarone, a baguette, some Asiago cheese and settle in for a few hours of quality entertainment!

If you enjoyed the main actors in “The Two Popes”, consider the following films.