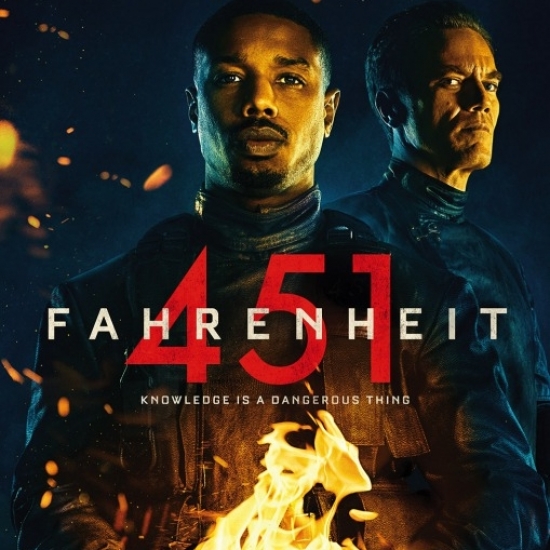 Friday night arrived again, and we had to select another movie to watch. This was a hard week for entertainment in our home, as so much that we tried to watch on either our discs or Netflix/Amazon Prime were garbage. For example, we tried Pacific Rim: Uprising (lasted 5 minutes before going to the garage sale pile), Hunters on Amazon Prime…man after two episodes we had to stop…this was complete fecal matter, besides being so over the top, there was just too many inaccuracies, blatant rip-off of Tarentino’s style (very poorly I might add), poor casting, horrible acting….i could go on forever on how horrible this potentially great idea was destroyed, but I have now gone off track. There were a few other missed attempts at shows, but we are here to talk about Fahrenheit 451.

I remember in high school when Fahrenheit 451 was required reading in my English class. This novel by Ray Bradbury highlighted a near future, dystopian society where history has been re-written, you are told what to watch/learn and only the state can educate you. Books are outlawed, and the fire departments sole purpose is to set fire to books versus putting out fires. In the book, Guy Montag is a hardcore fireman who is in a loveless marriage. He finds solace in his work until he meets his neighbour Clarise who introduces him to the world of books. At that time, he questions his own values, that of the state and tries to deal with it. As it was almost 40 years ago that I read the book, I still remember the basic premise, but not all the details, however, what I do remember is how much I enjoyed the book. I watched the original film decades ago, and also remember it with fondness. With that in mind, I was looking forward to the latest version created by HBO.

This version of Fahrenheit 451 has been modified to reflect todays realities, not only with the advances in technology, but also with the increase of the use of social media, in all of its various forms. The plot of this film is similar to the original movie and book, but also has enough differences to make it current.

In this version, Montag (Jordan) is a rising star in the firefighter’s ranks working under his mentor Capt Beatty (Shannon). Both Firefighters are earmarked for promotion as they zealously search the city for Eels (these are the dissidents who read, hoard, trade and collect books. A rebel group if you will) and graffiti (books, literature, art) for destruction. Clarisse (Boutella) a former Eel, is now an informant for Beatty and feeds him information on where graffiti and Eels can be located. She does this so that her sentence can be reduced. A sentence in this film can either be death or a loss of identity, if convicted, the individual will lose all rights, assistance etc. and became vagrants living on the street or in ghetto’s. Clarisse (Boutella) is slowly working off her sentence with Beatty when she gets introduced to Montag (Jordan). Their initial encounter sets the stage for them both, as they demonstrate a clear interest in each other…for their own reasons.

Through these interactions, Montag (Jordan) begins to doubt his mission and his belief in the system. This causes him to liberate a book before destruction, take it home and hide it with a stash of contraband that he has amassed through his life/career. At this point, this adaptation almost adds a little 1984 with Big Brother watching you thrown in. The movie’s version of Amazon Alexa or Google Home mini, is called “Yuxie”. Yuxie is an all seeing/controlling device that seems to be everywhere. Throughout the film, it also demonstrates that even when you think the device is turned off, it is still on. (Just like Alexa, where it has been reported that even a parrot can activate the device and place orders https://nypost.com/2018/12/18/foul-mouthed-parrot-uses-alexa-to-order-snacks-while-owner-is-away/)  As portrayed in the film,  Yuxie can not only assist you, but also can be used nefariously or even invade your own privacy.

With his contraband in hand, Montag (Jordan) discovers the attraction of the written word and learns what books and free thought can be all about. Simultaneously, it is reveled that Beatty (Shannon) has his own stash of contraband, (pens are even considered illegal here) and is using tobacco paper to write down ideas and concepts. However, he is a bit smarter than Montag and manages to turn off his Yuxie when doing this. However, even with his own transgressions being played out, he cannot let Montag (Jordan) run free.

Montage (Jordan) falls deeper under the spell of Clarisse (Boutella), and escapes Beatty’s (Shannon) trap to find refuge with the Eels. At this point he learns of an Eel plot to have all of the worlds literature and art put into a strand of DNA (OMNIS) that will be inserted into a bird and then brought to Canada. Once in Canada, scientists who are waiting for it, will ensure that this DNA is put into all living creatures, thus ensuring that the worlds art (Literature, music, art) etc. will not be lost forever. So that is the plot, without giving out too many story points and ensure that you get something out of the film if you wish to watch it. But was the movie good…hmm that is a tough one. I did not mind the film as it reminded me of the book that I read and enjoyed so long ago. It did a good job of making it current. This was done with the inclusion of the “Yuxie”, destroying hard drives and servers as well as the books, and also the large use of social media as a tool to capture Eels and destroy the graffiti. This was done well, however, I did find that the excessive use of the emoticons (fire, death head, etc.) when the reporters were talking, tended to get a bit distracting.

Yuxie, was a novel introduction in this film, and really demonstrated the 1984 Big Brother concept of you are never safe, you are always being watched. The “9” which was this movie’s version of the internet was novel, and also pretty relevant when applied to todays society. Especially as so much of the world is enthralled with the internet for everything from gathering information (real or imagined), shopping, dating, entertainment, conversation etc. While we are all aware of it as part of everyday life, it sometimes takes someone to see it on a film to gather the full scope of its influence.

With respect to the aforementioned areas, I found the film ok. I watched it to the end, but there are many areas that needed a great deal of work.

While this version loosely followed the original novel, it had a few plot holes and discrepancies that were hard to follow or digest. For example, the whole OMNIS and DNA arc. This was way out there, and should have been stricken from the plot line. I enjoyed the Eel version of each person memorizing a book far better (Kind of reminiscent of The Book of Eli – which by the way was very entertaining and would recommend it!). then the whole DNA thing. That could have been trashed, the sub-plot of Montag (Jordan) remembering his father and what happened could have been enhanced and brought forward, thus demonstrating greater motive to both main characters. Additionally, it probably would have been beneficial if they enhance the “why” were Firemen created, and the ideas that triggered society to become what it is.

The script could have used a few tweaks as at times the dialogue was wooden and strained. However, Shannon tends to deliver much of his script in most films the same way. His portrayal of Beatty was inline with several of his previous characters or roles. For example, in Boardwalk Empire (Nelson Van Alden) he is much the same. Very little emotion, very stoic and serious at all times. Even when there is a smile, you know there is nothing behind it. Also, I found his character confusing at times, he was the hardliner, ok got it, but also had contraband, I can see the turmoil, but it was not till the last memory of Montag (Jordan) that you can find his personal involvement with him and the “why” he took it to heart so much. This could have been re-worked a bit in my opinion to make a more dramatic “reveal” at the end.

Michael Jordan as Guy Montag; He was pretty one dimensional here. Followed the script and adhered to the story-line, but his portrayal did not give me reason to empathize with the character. Jordan is best suited in action movies like Creed or Black Panther. His portrayals in these films were great and he is physically suited towards the character. Action movies are where he is strongest. In Fahrenheit 451, this role required to many variations of emotion to get the audience on track, and in my opinion, he failed to deliver.

Sofia Boutella as Clarisse. I am seeing her in more and more films of late and am enjoying her various characters. In F 451, she again showed her skills. She played Clarisse very well, she demonstrated her inner turmoil for helping Beatty (Shannon) and the Firefighters against her former people, while also showing her own desperation in getting her sentence commuted. She played her “Feminine wiles” if you will on Montag (Jordan) and Beatty (Shannon) to ensure that she would get what she wanted. I first saw her in Kingsman: The Secret Service, and thought that she had potential. Since then, her contributions to Atomic Blonde, Star Trek Beyond, and the Mummy have demonstrated that her scope and talents are growing. I look forward to seeing her in other films in the future.

Overall, did we like the film. As previously mentioned it was OK, but maybe I was too wrapped up in the memory of a good book. It lacked emotion at times and was hard pressed to get you, the audience, to root for a character or group. We were mildly entertained, but I doubt that I would want to watch this film again. Instead, I think I would get Ray Bradbury’s book instead and give it another read.

If you are interested in other films with the main cast, please consider the following

Michael Shannon          Boardwalk Empire, Knives Out, The Shape of Water