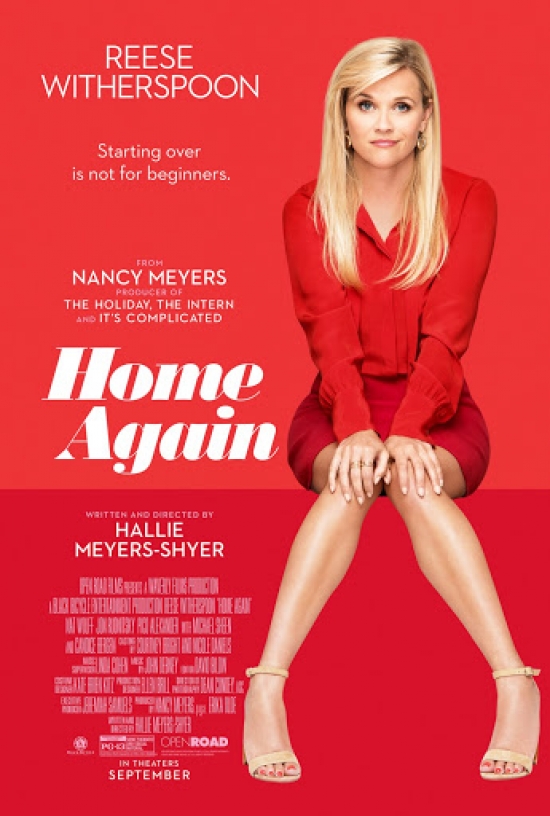 For this week’s selection, I decided to give my wife a break from the bargain bin drudgery that I had subjugated her to over the last few weeks. Reese Witherspoon is one of her favourite actors. I don’t know how many times I had to sit through Legally Blonde (1 &2), and Sweet Home Alabama. Mind you, I don’t mind her movies either, I just don’t have the same dedication to her films, as my wife does. So in that light, I grabbed Home Again from the pile of unwatched movies, opened a bottle of wine, lit the fire and started the movie.

First, a little synopsis of the film, before we start the colour commentary. Home Again is a tale of recently separated woman (Alice/Witherspoon) with two children (Isabel and Rosie) who move back to the family home. Now, as this is California and Hollywood, she happens to be the spawn of a famous director and actress (Lillian/Bergen) and this home is a legacy to her father and childhood. She has two precocious children who are just adorable, and she is trying to get them to adjust to their new lives back in California. Their father (Austen/Sheen) is in New York and is some kind of Record Producer. Poor Alice turns to her friends for solace and advice. They encourage her to let her hair down and go on a night on the town.

Meanwhile, enter 3 young aspiring gentlemen. They are trying to have a movie made and looking for financial backing. Now these 3 guys, (the idea-man or producer, the writer, and the actor) are starving and desperate for a break. These guys sort of reminded me of the three stooges, except not in the slap-stick kind of way. Just that they were lovable losers who were looking for a break. Naturally, they look for a break in a bar and just happen to cross paths with Alice (Witherspoon) and her posse. Nature takes over at this point, they become attracted, and the whole party moves back to Alice’s (Witherspoon) house. Ultimately, they wake up the next morning, Alice (Witherspoon) to see a hungover Harry (Alexander) in her room, and find the rest of the boys and her friend (George/Rudnitsky, Teddy/Wolff and Tracy/Wells) passed out on the couch.

While everyone tries to get their collective S*&t together and recover, enter Lillian (Bergen), aged star, and Alice’s mother. The young stooges recognize her for who she is, Lillian (Bergen) loves the attention and comes up with the brilliant idea that they move into the guest house until they get discovered. After some hesitation from Alice, they do, and a new living situation ensues. An affair between Alice (Witherspoon) and Harry (Alexander) starts, while the rest of the boy fall in love with her and the kids as well. This December/May relationship hits all kinds of rocks and shoals, while the children become enthralled with their new houseguests. The estranged father Austen (Sheen) feels threatened for his family and returns home to find this new living arrangement and tries to insert himself back into the family. I won’t give out the ending here, but predictability is the key. Nothing surprising or outrageous will happen in this formula driven film. You will have to sit through it yourself to find the ending.

Now what did we think of the film, I thought it was a little clichéd, nothing new and there were no stellar performances to be observed throughout the film. Well maybe the daughters, they were cute and actually made me laugh a few times. My wife, as previously mentioned is a huge fan of Witherspoon and actually felt that this movie was only OK, nothing special. Witherspoon probably did this out of a contractual obligation or because she needed the money. She just re-hashed previous characters/roles and phoned it in. She is a very talented actress and we usually enjoy the films that she is in. My wife loves her in “Legally Blonde and Sweet Home Alabama”, and we both found her to be amazing in “Wild”. Even when she played the love interest in “This Means War”, the film was amusing, not great, but amusing. Needless to say, this was not her tour-de-force if you know what I mean. Is she to blame, maybe not, she did not have much to work with as far as co-stars, love interests and dialogue. From our opinion, not one of her better roles.

Candice Bergen as Lillian; Candice Bergen is and was a very talented actress. However, in this role, she is literally past her “best before date”. Her character was lame and actually kind of annoying. This was a far cry from even one of her first roles in “Bite the Bullet”, where she was actually really good. Also, for fans of “Murphy Brown” when her name become a household entity, this role kind of makes you cringe. At this point, she should centre on things that she can do well. Play the harpy or villain like she did in Miss Congeniality and Sweet Home Alabama, that is where she is strongest at this time. We found her contribution to the film to be minimal and kind of annoying. Same as with Reese, she could just be the victim of a poor script and/or direction, and just filming this movie to make a few bucks. Not one of her better performances.

Pico Alexander, Jon Rudnitsky and Nat Wolff as Harry, George and Teddy respectively: As I mentioned before, I kind of thought of these characters as a version of the 3 Stooges without the comedy. There roles were comical, and I don’t mean this in a good way. It was so blatantly obvious that they would all fall for the wiles of the cougar, sorry I mean Alice/Witherspoon, that it was laughable. I have to admit, I looked at their list of work on IMDB, and I don’t think I have ever really seen them on anything. In the few cases where I recognized a title that I have watched, I don’t remember the character that they played. Of the three, I think Rudnitsky has the most potential, but he probably needs a better vehicle to portray his skills than this film.

Michael Sheen as Austen: Here was another case where a talented actor was wasted. His role here as the forlorn soon to be ex-husband was predictable and could have been expanded further. Actually my one and only favourite scene in this movie was with him and Teddy/Wolff. They had a fight that was so fake, it would make the wrestlers from WWE cringe. I was making jokes through the whole scene to my wife (who has to laugh at all my one liners and quips…it is in the marriage vows)…i.e. How can Teddy beat him up, don’t they know that he is a serial killer (Reference to his role in “Prodigal Son”) also he was an Arch Angel (Good Omens). He should be kicking his ass, not getting his ass kicked. Michael Sheen is actually a really good actor (Good Omens, Prodigal Son, Underworld series, Blood Diamond) and again like the other major stars of this film, his character was underutilized and wasted.

Lake Bell as Zoey: I actually liked this character, Bell played the hoity-toity, self serving, annoying rich woman very well. She is a good supporting actress in any of the films and/or tv series that I have watched with her in it.

Dolly Wells as Tracy: The only reason I included her in this review, was that during the film my wife and I had the revelation that she was in the mini-series Dracula that we both liked. Her role here was minimal to say the least and she did not have much influence over the story…but we liked her in Dracula so I thought I would include her here.

So in a nutshell, were we entertained? I would say barely…we sat through it all as it had one of my wife’s favourite actresses in it, and it was slightly amusing at times. I think I had more fun making wise cracks about the story-line and participants than the actual film itself. Unless you are a huge fan of the cast, I would pass on this film, unless you want to waste 2 hours of your life.

If you want to see some good filmsor TV with the cast of “Home Again” consider the following: