Brutus Beefcake named to the WWE Hall of Fame 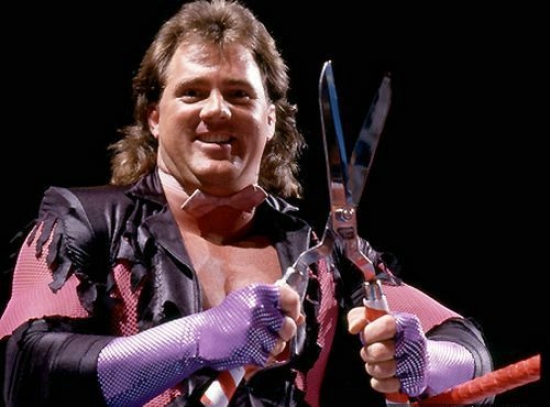 As been suspected for nearly a month, the WWE Hall of Fame rounds out its Hall of Fame class with the announcement that Brutus “The Barber” Beefcake will be inducted this week.

Known as Ed Leslie on his personal identification, Beefcake got his start as Eddie Boulder the kayfabe brother of Terry Boulder (Hulk Hogan) and he would wrestler on the lower card of multiple promotion as that name and later Dizzy Hogan.  When Hogan was signed by the World Wrestling Federation in late 1983 and quickly became their Heavyweight Champion he was able to exert some influence and get his good friend (Leslie) a spot in the rising wrestling promotion.

Now named Brutus Beefcake, his gimmick was a self-absorbed Chippendale like character and he would take on Johnny Valiant as his manager.  He would wrestle against David Sammartino in the inaugural Wrestlemania and a few months later with Greg “The Hammer” Valentine he would become one half of the WWF World Tag Team Champions when they defeated Mike Rotundo and Barry Windham. The reign lasted until Wrestlemania II where the lost to the British Bulldogs and they spent the rest of the year chasing them to regain their belts, though they would be unsuccessful.

Beefcake would turn face at Wrestlemania III when Valentine, Valiant and their cornerman Dino Bravo left him in the ring following their win over the Rougeau Brothers.  He would help “Rowdy” Roddy Piper defeat “Adorable” Adrian Adonis and cut the latter’s hair as revenge for Adonis erroneously cutting Beefcake’s hair in a televised six man tag team match.

This would lauch one of the more improbably high card babyface acts in the history of the World Wrestling Federation as Beefcake began cutting the hair of his opponents after he would beat them and the fans alike responded.  He would feud with his old partner and then with the Honky Tonk Man for the Intercontinental Title.  He was scheduled to face Honky at the first Summer Slam in 1988 but he was taken out by “Outlaw” Ron Bass who he then feuded with and defeated in a hair vs hair match on a Saturday Night’s Main Event.

Following Wrestlemania V, he would feud with Randy “Macho Man” Savage and in his highest profile match he teamed with Hogan in the main event at Summer Slam 89 and defeated Savage and Zeus.  He would pin Mr. Perfect at Wrestlemania VI and was scheduled to face him for the Intercontinental Title at Summer Slam 1990 but a parasailing that shattered his face took him out of action and he would not wrestle again for three years until he wrested Ted DiBiase on Monday Night War.  DiBiase and his WWF World Tag Team Championship partner, Irwin R. Schyster tried to reinjure his face and put him out of action but would be rescued by a returning Hulk Hogan.  This led to Beefcake’s last high profile match in the WWF where he and Hogan challenged (and lost by disqualification) to DiBiase and Schyster.

Leslie would join Hulk Hogan in WCW where he would take on a multitude of personas as he was not allowed to be known as Brutus “The Barber” Beefcake there due to the WWE’s copyright on the name.  Over a four year period he would appear as Brother Bruti, The Butcher, The Zodiac, The Booty Man and The Disciple which would see mixed success but many televised appearances.

Ed Leslie may not have been the best wrestler by any stretch of the imagination but in the late 1980’s and in 1990 he was one of the top babyfaces in a high money period in the WWF.  That shouldn’t go unnoticed and his induction reflects this.  We had him ranked #71on our last ranking of those to consider for the WWE Hall of Fame.

We here at Notinhalloffame.com would like to congratulate Brutus Beefcake on earning this honor.

More in this category: « Can Anyone Beat the Golden State Warriors for the NBA Championship? The College Basketball Hall of Fame Announced their 2019 Class »