Our Basketball List has been revised! Dirk Nowitzki, Dwyane Wade and Pau Gasol enter at 1-2-3 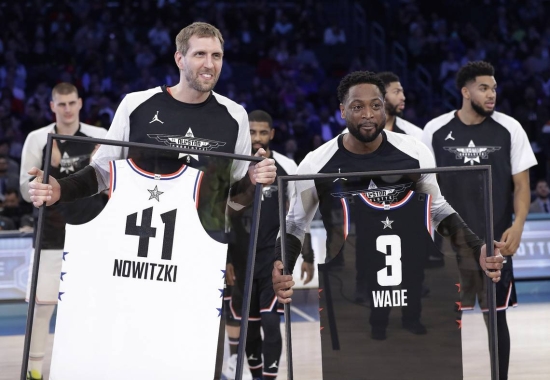 During this crazy time of NBA free agency, we have a basketball related announcement ourselves:

Our Notinhalloffame Basketball List has been revised to reflect the recent inductees and those now eligible.

What exactly did we do?

First, we took off those who were chosen for the Naismith Basketball Hall of Fame as part of the 2022 Class.

Second, we add those who are now eligible for the 2023 Class.

Third, we incorporate the comments and votes on those on the list, and alter accordingly.

Here is the new top ten on the Notinhalloffame.com list of those to consider for the Naismith Basketball Hall of Fame.

Coming at #1 is Dirk Nowitzki, the German superstar who played his entire career with the Dallas Mavericks.  Nowitzki led Dallas to the 2011 NBA Championship, and individually, he was an 11-time All-Star.  He was also chosen for four First Team, five Second Team and three Third Team All-Star Selections.

Debuting at #2 is Miami Heat icon, Dwyane Wade.  The former Guard was strongly considered for the top spot, and had his squad beat Dirk in 2011, he might have been!  Wade won three NBA Titles with Miami, went to 13 All-Star Games, and was a two-time First Team, three-time Second Team and three-time Third Team All-NBA honoree.

Pau Gasol makes his first appearance at #3.  The Spaniard won two NBA Titles with the Lakers and internationally led Spain to Gold in the 2006 World Cup and captured two Silvers and a Bronze in Olympic competition.

Last year’s #1, Max Zaslofsky dropped to #4.  A four-time All-BAA/NBA Selection, Zaslofsky won the 1947/48 scoring title while as a member of the Chicago Stags, and he also played for New York, Baltimore, Milwaukee and Fort Wayne.

At #5, is another strong debut, Tony Parker.  A member of the powerful Spurs teams that won four NBA Titles with him, Parker was a seven-time All-Star, and was also chosen for four Second Team and one Third Team All-NBA.  While representing France, Parker won four medals in EuroBasket, including Gold in 2013.

Chauncey Billups fell slightly to #6.  Leading the Pistons to a Title in 2004, Billups went to five All-Star Games, and was a three-time All-NBA player.

Shawn Kemp dropped to #7.  The “Reign Man” was an icon in Seattle and was a six-time All-Star and three-time Second Team All-NBA honoree.

Larry Foust inched up to #8.  Foust went to eight All-Star Games in the 1950s, and was a First Team All-NBA player once.

Buck Williams moved up two spots to #9.  Williams was the 1982 Rookie of the Year, and a three-time All-Star.

Mark Aguirre rounds out the top 10.  A two-time All-American at DePaul, Aguirre won two NBA Championships with the Pistons and was also a three-time All-Star.

Please note that our list at present does not include women and international candidates.  We will look at doing that in the future.

Cast your votes, and offer your opinions.

As always, we have a heartfelt thank you from all of us at Notinhalloffame.com

More in this category: « The Hockey Hall of Fame selects six names for the Class of 2022 The Winnipeg Blue Bombers name three new members to their Hall of Fame »