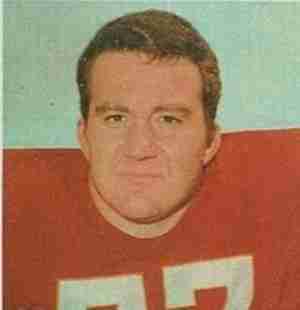 Out of all the people on this list we will say up front that there is zero chance that Jim Tyrer will get into the Football Hall of Fame.  Killing your wife and committing suicide there after is sadly what Tyrer is best known for and this has led to him being ostracized by the NFL.

Had Tyrer not broke down in his personal life, his on field accomplishments may have been enough to get him in to Canton.  He was arguably the best Offensive Lineman in the AFL, and was a multiple time AFL All star.  He was voted to the all time AFL team and was a big part of opening holes for Chiefs runners for years.  Tyrer may very well the best lineman that Kansas City ever had.