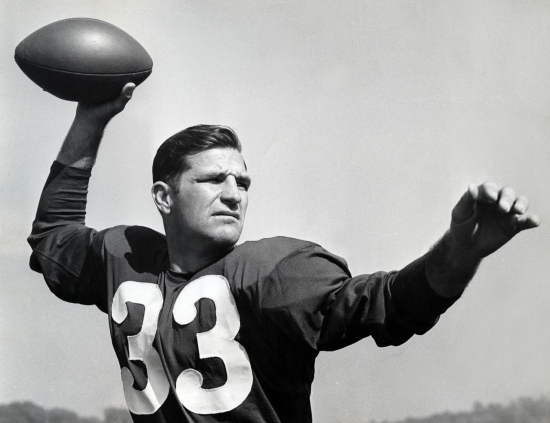 At TCU, Sammy Baugh played basketball, baseball, and football, and he was excellent at all of them.  Baugh was more passionate about baseball, but football was his true calling, and he signed with the Washington Redskins, who made him the Sixth Overall Pick in the 1937 Draft.

The selection of Baugh paid instant dividends for Washington, as Baugh played at Quarterback, Tailback, Punter, and Defensive Back, and as a rookie, he led the league in Passing Yards (1,127), was a First Team All-Pro, and led the Redskins to the Championship.  Baugh was a Pro Bowler at Tailback annually from 1938 to 1942, and again in '42, he took them to a Championship win.  In the year after, Baugh had a game where he threw four Touchdowns and defensively had four Interceptions.  This was the season where he led the NFL in picks with 11, and he would accumulate 31 in total in his career.

As the Quarterback’s position evolved, Baugh evolved with it.  "Slinging" Sammy became one of the first stars at QB.  He led the league in Pass Completion Percentage eight times, including five years in a row from 1945 to 1949.  In 1947 and 1948, he was first in Passing Yards again, this time with more significant numbers of 2,938 and 2,599 respectively, and in both campaigns the Washington D.C. Football Club named him the league MVP.

Baugh played until 1951, retiring in a career spent entirely with Washington.

Notably, Baugh was one of the best Punters of the 1940s, as shown by leading the NFL in Yards per Punt five times.

Baugh is a member of both the NFL 75thand 100t Anniversary Team, and his number 33 was the first to be retired in franchise history.   He left football with 21,886 Passing Yards, an outstanding number for a QB.

Other lists might not place Baugh on the top of the greatest Redskins, but he should be.