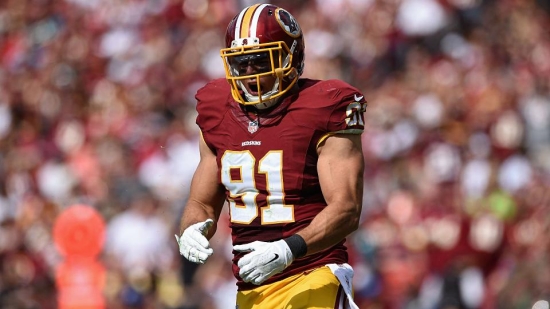 Ryan Kerrigan was the 2010 Big Ten Defensive Player of the Year, and you would expect from a player who won such an accolade, he went high in the draft.  The Washington Redskins took him 16thOverall, where he became their starting Right Defensive End as a rookie.

Kerrigan moved to Outside Linebacker as a sophomore, and he was a Pro Bowl in 2012.  An expert pass-rusher. Kerrigan led the NFL in Forced Fumbles (5) in 2014, and Tackles for Loss (18) in 2016, and he has had four 10-plus Sack years.  The former Purdue Boilermaker went to three more Pro Bowls consecutively (2016-18).   Kerrigan's output declined in 2019, and he was coming off of the bench in 2020, which would be his final year in Washington, as Kerrigan signed with division rival Philadelphia, but that would only be for one year before he retired.

Kerrigan had 95.5 Sacks and 120 Tackles for Loss over his career.

Should Ryan Kerrigan be in the Hall of Fame?