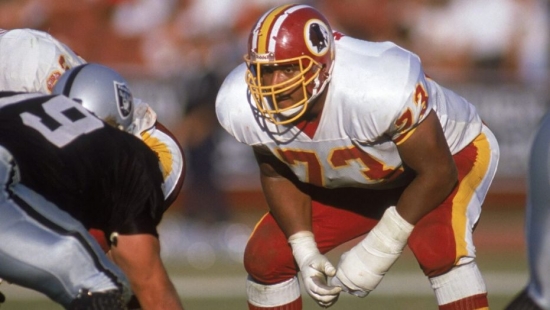 From the University of Pittsburgh, Mark May was a First Round Pick (20thOverall) by the Washington Redskins, and was an original "Hogs," a term coined by Offensive Line Coach Joe Bugel, the year after May was drafted.

May became a starter at Right Guard halfway through his rookie season, and he held that spot until 1984 when he moved to Right Tackle.  May helped the Redskins win their first Super Bowl (XVII), and their second (XXII).  After that second Super Bowl, May moved back to Right Guard, and he was a Pro Bowl Selection for the first and only time.

A knee injury kept May out of the entire 1990 season, which would be the last he was under contract with Washington, as he signed with the San Diego Chargers in the offseason.  With the Redskins, he started 115 of his 123 Games.