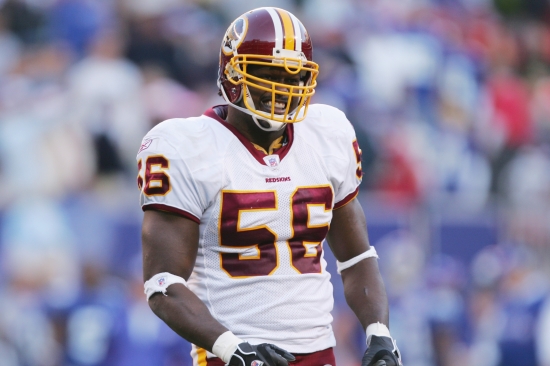 LaVar Arrington was taken second Overall in 2000, and the Linebacker from Penn State was coming off one of the greatest defensive seasons by a Nittany Lion. In 1999, Arrington won the Butkus Award, Bednarik Award, and Lambert Award and was a two-time All-American.

Arrington would be an All-Rookie playing at the right side, but he moved to the left and strung together one of the best three-year runs ever by a Washington Linebacker.  From 2001 to 2003, Arrington was a perennial Pro Bowl Selection, and he was twice a Second Team All-Pro.  Arrington led the NFL in Forced Fumbles in 2003 (6), and he was equally capable of stopping the run or attacking the passer.

Problems with his knees and clashes with management held him to four Games in 2004, and he was not nearly as effective in 2005.  Arrington signed with the New York Giants in 2006, but he only played six Games before his career ended.  Nevertheless, Arrington is one of the best Linebackers in Washington history, albeit only for a three-year period.