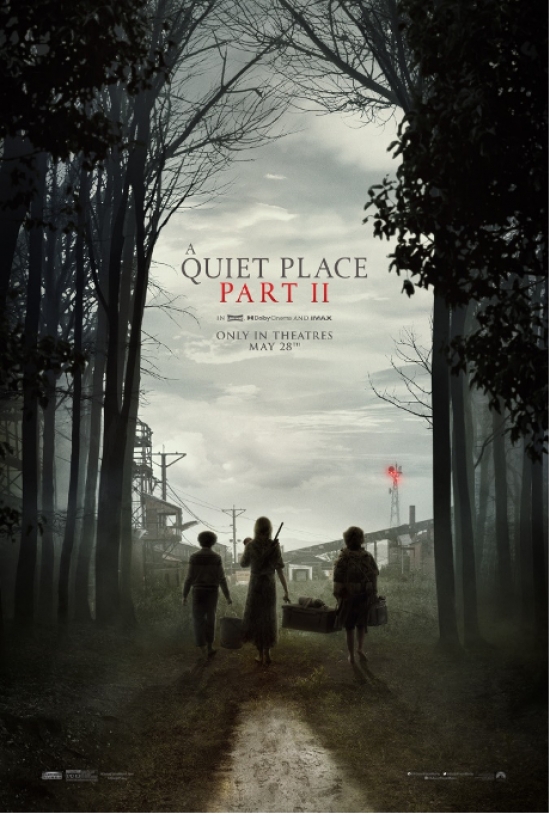 Over the last few weeks we have been extremely busy so we have not managed to catch a movie or show that I felt inclined to review. First, I tried a film that I had been looking at for awhile, it was a sci-fi adventure drama with Brad Pitt and Tommy Lee Jones to name a few of the top billed actors. This film was “Ad Astra”, but like the Shania Twain song, that refers to Pitt (and also mentions rocket scientist like in the film) so it fit the song twice over, Ad Astra did not impress us much! So after 40 minutes of plugging through the film I had to stop it and move on. Flicking through the Amazon Prime selections we came across “A Quiet Place – Part 2”. Now, I reviewed the first film over a year ago https://www.notinhalloffame.com/blogs/was-i-entertained/11332-review-review-a-quiet-place-2018 and we found the film was pretty entertaining overall, so I was looking forward to the sequel.

In the sequel, the opening starts sort of where the last film ended, with a small addendum. They actually fixed some of the plot holes of the first film by showing a flashback on when the alien/monsters actually came to Earth and the carnage that resulted after their arrival. In the opening scenes we find our family alive and in one piece attending their son’s baseball game. We can tell that this is small town USA as most of the town is at the game, and watching with enjoyment. We are re-introduced to the main characters, Evelyn (Blunt), Lee (Krasinski), Regan (Simmonds) and Marcus (Jupe). We also see their younger brother who dies in the first film. Additionally, we come across Emmett (Murphy) a neighbour and friend. As his character is just thrown in, you know he will be important later.

So the game continues, Lee (Krasinski) shows up with some fruit for the kids after buying it at a local store. Mind you, while there we see a few scenes on the television in the background of things crashing to the Earth, not to mention a few shots of key items that were critical in the first movie’s story. So, lo and behold, a meteor cuts across the sky over the game, panic ensues as all the parents grab their kids to run to safety. It is at this moment we see the Alien monsters go whipping around the town killing/eating anyone that they can come across.

The film flips back and forth a bit at this time, giving us a bit of a backstory on the attack as well as starting right after the last film where their home is burning, Lee (Krasinski) is dead and the remaining Abbotts are on foot looking for a new home. In short, they meet up with Emmett (Murphy) who is having a clash of conscience, Evelyn (Blunt) continues to try and keep her family safe, Marcus (Jupe) tries to find courage, Megan (Simmonds) has an epiphany on how they can destroy the aliens, and naturally the baby continues to cry. As this is a new film on the streaming services (as it did not really get a chance in the theatres due to Covid) I don’t want to give out too many spoilers. But needless to say, the film does have a lot of drama and sufficient action to keep you tuned in. While there is some predictability in the film and obvious foreshadowing at times, the action scenes and dramatic sequences still made us jump as the directors/script had planned.

So, what did we like about the film? We enjoyed the fact that this sequel actually filled in some story gaps that were present in the first film. In the first film, all we see is some newspaper articles and wreckage with no real explanation, the sequel expands on the few nuggets of information while providing some clues to what would become important in the film (i.e. the toy spaceship, the pharmacy etc). We also liked the fact that the children’s roles were enhanced and that this film was not just a film with Emily Blunt at the forefront. The story line was a fair continuation from the first film, and actually did not have too many plot holes or inconsistencies.

However, having said all that, lets take a look at what was lacking. One thing that always bothered me with this film was the fact that the Abbott family always walked barefoot, yet when they hook up with Emmett (Murphy) and go to the island, everyone else has boots on. What’s up with that? It is like I said in my first review, I could not understand the whole barefoot thing in the country.  Additionally, the tops of their feets are dirty, ok I can get that, but why not the bottoms, they should have been caked in grime.  Even though I enjoyed Emmett’s (Murphy) lair, his booby traps and hidey holes would have made McCauley Culkin proud. Yet, the one thing I noticed, it would have been extremely difficult to ensure that it was quite when the traps were being set. Would that not have called the monsters/aliens? Sure there are a few other technical goofs like how can a manual turntable be playing consistently for months without human interference, or why is a train car showing claw marks on the outside, yet when they enter it, the hole created on the side is from something escaping, or my personal favourite, Evelyn (Blunt) yelling “run” to her daughter who is deaf and facing the other direction …that one just made me want to scratch my head. I also found that there was more discussion in this film, the first one had very little talking, and they acted with their eyes, emotions and facial expressions. In this outing, there was more discussion so there was less emphasis on the acting, but still it flowed nevertheless.

While we are on the subject of the acting, lets take a quick look at the characters in the film:

Emily Blunt as Evelyn Abbott: Blunt pretty much is the focal point of the film, even when not on the screen her character affects all. As with the first movie, Blunt displays great chemistry with her co-stars and she portrays an intensity of a lioness protecting her cubs throughout the film. Another good performance by Blunt in a thriller/horror film. The more I see her in film/television, the greater I can appreciate her talents.

Millicent Simmonds as Regan Abbott: This is the 2nd film I have watched with Simmonds, but she is still playing the same character. In this film, her character has been expanded and we still see the obstinate teenager, but we also get to see the brains hiding behind the silence. Emulating her father for ingenuity, she realizes the importance of her hearing aid and the role it can play to defeat the aliens. Additionally, she puts the pieces together to use the devices with the Radio station as a weapon against them. Though she is relatively new to Hollywood, I am curious to see her in other roles and see how much her talents can grow.

Cillian Murphy as Emmett: Even though Cillian Murphy has been around for quite awhile, I did not really pay much attention to him and/or his roles. However, along came Peaky Blinders, and during the last lockdown my wife and I managed to watch the whole series. It is at this point that I realized how talented Murphy was, and how many programs that I had watched over the years that he had either a starring role or a supporting one. In this film, while Murphy is in a supporting role as the family friend and fellow survivor he still manages to portray the intensity that we loved to watch in Peaky Blinders. Even though there was some predictability on whether Emmett (Murphy) would aid the Abbotts, you knew it was going to happen, it was just a matter of time. However, he did project enough angst in his decision process to make you wonder if he would. Another fine performance from Murphy…too bad Peaky Blinders is finished as I really liked him in the show and the character he built.

John Krasinski as Lee Abbott: Krasinski really only had a minor role in this film, primarily in clips from the first film and some scenes at the start with respect to the Aliens first contact. His small portions were played well and I did like the fact that some of the plot holes or questions were answered in this film. A good, but minor outing for Krasinski overall (as far as his acting is concerned), but as a Director he did a very good job not only in this film, but also the first one as well.

Noah Jupe as Marcus Abbott: I found Jupe’s performance far better in the sequel than he did in Part 1. His fear was amplified in this outing as well as his uncertainty, and he did an excellent job of projecting these emotions throughout the film. I did like the fact that his character ultimately found the courage that he was lacking in the first film. This is the 4th film I have seen him in and I enjoy the fact that his talents are expanding with each outing.

Djimon Honsou as Man on Island: Honsou is a personal favourite of mine. He has a very small, un-named role in Quiet Place, Part 2, but it is integral to the climax of the story. I would love to say that his screen time was amazing and that he gave a great performance, but in this film, his part could have been played by anyone. They did not need an actor of his calibre for this, unless it was just another way to get a big name on the ticket. To me, his skill was underutilized for this film. I look forward to his next adventure/thriller movie where he will get a chance to show his talent on the screen again.

So, now, were we entertained? Yes, we were! My wife and I enjoyed the film, the story was well written and directed. It flowed well and the effects and script were fairly well done. We jumped when we were supposed to and cheered for the heroes on que. The added benefit was the completion of backstory which was lacking in the first film. My only criticism, was again, in this film they left it open for a sequel. Can Hollywood not tell a story from start to finish without leaving an opening for a further money grab? All things considered, we were entertained for a Friday Night, and we felt that our time was not wasted. If you are a fan of the original film, Blunt and/or Krasinski, give this movie a watch. You will enjoy yourselves, and should not be disappointed. If you are not into the whole Alien/Monster thing, you might want to give it a pass.

If you are interested in other films/shows with the main cast, please consider the following recommendations!