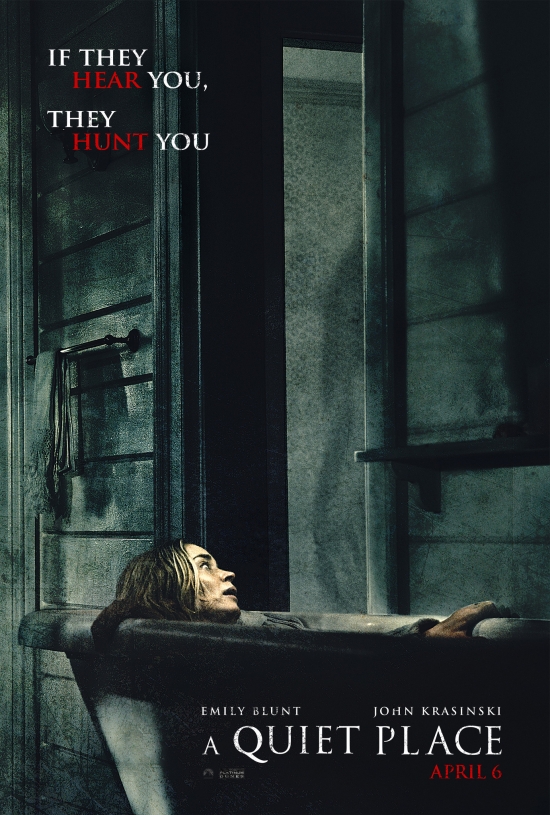 For this week’s review, we decided to try a horror film. Ok, it was not a decision, it was just the next movie in the pile. Actually, “A Quiet Place” is not just horror, it is a little bit Sci-Fi and drama all rolled up into the same film. Overall we enjoyed the film, we were entertained and even in the most intense sequences we only jumped a little bit. Luckily not enough to spill any wine or snacks! Even though we enjoyed this film, there were several blatant plot holes or story inconsistencies that were hard to take, but if you overlook them, the story works out just fine.

So what is “A Quiet Place” about you say? Well, it is the near future and our family of hero’s are living in a post apocalyptic world. The film opens in a small town where you are introduced to the Abbott family. They are in typical “post apocalypse” clothes, with the striking difference that they are all barefoot. Rummaging in a pharmacy, it is clearly evident that they are trying to keep all sounds to a minimum, however the reason is not apparent yet. Everyone is using sign language to communicate, and we can see the hearing aid device on Regan (Simmonds) to help us understand why. After getting the required medicine, they make their way out of the store, unbeknownst to his parents, the youngest is carrying a toy Space Shuttle in hand. This toy was discovered in the store by the young fellow who just wanted to play with it, however, due to the fact that it made noise, his father, Lee (Krasinski) removed the batteries from it and set it down. However, as they were leaving the store, Regan (Simmonds) gave him the toy behind her father’s back, but did not see her brother grab the batteries. This proved to be his undoing as they made their way home, barefoot, walking on a sand path. On the way home, the little guy puts the batteries back in the toy, sparks it up, lights and sirens scream out from the toy, and then the little boy becomes lunch for an alien who is attracted to the sound. Meanwhile, the rest of the family looks on in horror, unable to scream/speak etc. as they too would be killed.

The remainder of the film outlines their life as they try to move on. We find out why they can’t talk via newspaper snippets on Lee’s (Krasinski) desk. Apparently aliens landed and attacked anything that made noise. They are armoured, do not have a known weakness and are extremely hard to kill. They have pretty much destroyed the world as we know it, and there are only pockets of humanity left. This we can deduce by fires in the distance at night. These fires represent various survivors scattered across the countryside.

We see the family live in tension, always on guard, always quiet, always living in fear. Scared of the slightest sound that can attract the aliens, scared for the future of the unborn baby soon to arrive, basically scared of everything and just trying to eke out a living.

Not much more to this film than what was described above. Was this film done well? People have various opinions on this, my wife and I enjoyed the film. It was wrought with tension. Every little sound would make us jump and the use of the aliens was not overly done. We (the audience) got to concentrate on the story, the acting, the cinematography. Acting in a film such as this is even more difficult as the cast could not rely on dialogue to tell the story, it was all them. Facial expressions, sign language, and human interaction were the story line. We could see the anguish in the family, feel the frustration of Regan (Simmonds) as she felt the guilt of her brother’s death, and could smell the fear of Marcus (Jupe) when he went to the river with his father. All of these feelings and sensations were brilliantly presented to the audience. As mentioned previously, every sound would make us jump, we felt for the family, we wanted them to succeed.

Were there problems with the story/plot that were hard to overlook? Unfortunately, there were. But we managed to skim past them to enjoy the film. Some of the plot holes were huge, others not so much. The following is a list of some of the errors that we caught;

I am sure that there are several other problems and inconsistencies in the film that I missed. But these were the ones that jumped out at us. However, did we enjoy the film? Yes, we did. The acting was great, Krasinski and Blunt had excellent chemistry (mind you, they should as they are married in real life). The children, pretty much unknowns were very good as well. Regan (Simmonds) and Marcus (Jupe) easily conveyed the fear and angst of the world that they were living in. The cinematography was great, beautiful scenery with a post-apocalyptic flair. Krasinski, also doubling as the director did an excellent job as well with this film.

“A Quiet Place” was set up for a sequel, and it was supposed to have been released within the last few months, however with this Covid thing going around it has been postponed till the fall. Will we see the sequel? If it is as good as the first one, we definitely will.

If you want to see a horror film that is slightly different from the norm, check out A Quiet Place. If you can get over some of the issues mentioned above, it will entertain you, just as designed!

If you are interested in some films from the principal characters, check out the following;