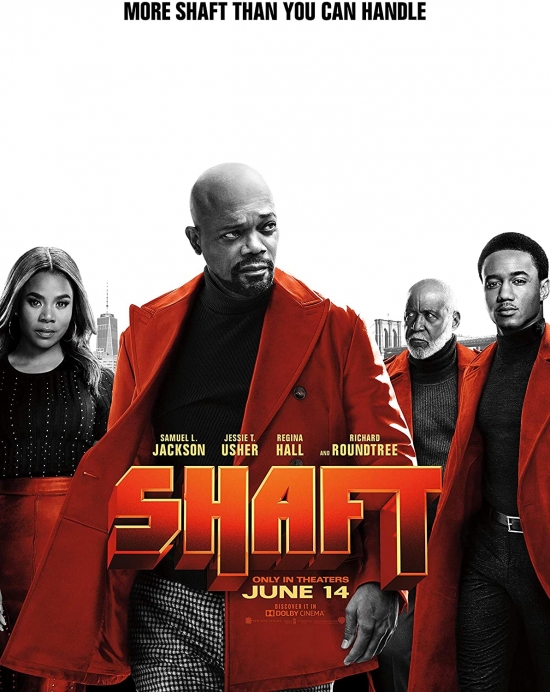 Another weekend, another film to watch and review. For this weekend’s viewing pleasure, I decided to put in a film that stars one of my favourite actors, Samuel L. Jackson. Now Jackson is an awesome actor with numerous films to his credit. As with any actor who has a resume that is this extensive, some of the films are awesome, some great, some good and the remainder has something to be desired. In the case of Shaft (2019), I would say that this film was fair too good. The only reason that it would even rate an good score is strictly due to the talents of Jackson in the title character.

Shaft (2019) is the 5thmovie carrying the name, the first in 1971 (Shaft), Then Shaft’s Big Score (1972), Shaft in Africa (1973), Shaft (2000) and Shaft (2019). Now these films are not remakes, but sequels if you will. The first 3 starred Richard Roundtree in the leading role, Shaft 2000 introduced Jackson as the son, and now in 2019, we have Usher as the son/grandson depending on how you want to follow the lineage for the film. However, in all instances, Shaft has been able to save the underdog, find out what the crime was and ultimately do-good. Even if the path is a little crooked and confused along the way.

Shaft (2019) opens with a photo-shopped Shaft looking 30 years younger with his wife and new child. Husband & wife are having a heated discussion that does not seem to be going well for our intrepid hero. Next thing you know, his vehicle is being shot up by some guys looking for revenge. Naturally, Shaft (Jackson) escapes unscathed, as does his family. But sadly, his marriage is pretty much over due to this unexpected violence. Next, we jump 20 plus years and we see J.J. Shaft (Usher) working in the FBI as a cybersecurity analyst. As we find out, he is completely different from his leather jacket wearing father (Jackson). J.J. (Usher) does not like guns or violence, follows the rules (to a point) and would rather use his mind vice his fists to solve a problem.

When a childhood friend gets murdered in Harlem, J.J. (Usher) and his friend Sasha (Shipp) try to investigate what happened, to no avail. Figuring that there is only person that J.J. can get help from, they go to his father Shaft (Jackson) to get some much needed assistance and unique guidance in how to solve the murder of their friend. This is where the fun really begins. J.J. having a completely different style than his father is introduced into the “Shaft” way of doing things. This includes excessive violence, quips and one-liners and also a dramatic propensity for swearing. As this is a film that any fan of Jackson would want to watch, I will not go into too much detail; but it is safe to say that J.J. (Usher) reunites with his father, meets his grandfather, gets the girl, gets the bad guys and discovers that he is really a man worthy of the Shaft moniker.

In a nutshell, that was the story line without giving out any real spoilers. As all fans of this genre are aware, the formula is pretty predictable, and any film that wants to be remotely successful, will adhere to this tried and true process. What will make a film stand-out is how much the actors, script and/or direction gives the film it’s uniqueness. In the case of Shaft (2019) the really only factor that makes the whole film worthwhile is Jackson’s performance. The film’s plot was predictable as previously mentioned; the script/dialogue so/so, and the special effects/action sequences were completed reasonably well. I have no doubt that in the case of Jackson and Hall, that much of the dialogue was ad-libbed to make it feel real and also deliver the right amount of humour. While on the subject of the cast, lets take a look at some of the key players in this film.

Jessie T. Usher as John Shaft (jr): As one of the principal names on this film, Usher’s performance was kind of lacklustre. I had previously watched him in “The Boys” on Amazon as ”A-Train” and he provided a respectable performance. However, on Shaft, he was pretty much eclipsed by his father (Jackson). He really did not provide any zip to the character, and his delivery was almost always dead-panned. In “The Boys” I found him to be a little more animated than what he provided in this role. However, having said all that, his flat performance actually kind of complemented Jackson’s character. I did look to see what Usher had done in the past and besides “The Boys” he had only been a guest in some of the other shows that I had watched in the past, i.e. Numb3rs and The Mentalist.

Richard Roundtree as Shaft (Sr): Roundtree has been around for decades and made his name on the Shaft movies. He still manages to hold his own in a film at 76 years old, though his real purpose was to give some history to the film and also add another big name for the fans of the past. His chemistry with Jackson was fine as well as with the other co-stars. What I found interesting is that when the film was made, he was 76 years old, yet his “son”, Jackson was a young 70…guess he started making his family real young!

Regina Hall as Maya Babanikos: I have always enjoyed Regina Hall’s performance. She goes over the top and her hysterics and attitude were a perfect complement for Jackson’s character. She could deliver her profanity laced lines with the same verve as Jackson and would match him word for word, not mention her screams! Her chemistry with all the other main characters was evident and she was an added bonus to the film writ large.

Alexandra Shipp as Sasha Arias: Shipp played the love interest to J.J. While it was clear that she was interested in him, he was too dense to pick up on it for most of the film. She displayed good chemistry with Usher, and appeared to fit into her character well. Her performance was solid enough for me to look up what she had done previously, found out that we had seen her in small parts in the X-Men franchise. Having said that, I think that she has moved forward in her roles and skills, but also has further to go.

Samuel L. Jackson as John Shaft: I saved the best for last, Jackson delivered as always! Without his performance throughout the film, I don’t know if I would have finished it. No one but Jackson can spew profanity with such elegance and style. For example, my wife and I watched the series Deadwood years ago, and they use profanity in the place of punctuation in that film. My wife was not impressed with it and often said how much the swearing bothered her. Yet, when watching Jackson in a film, every time he utters MotherF*&%^er, she laughs and thinks it is funny. Who knew it, I guess it just the way it is delivered! Additionally, for a 70-year-old man, he is still very spry and he could still swagger with the best of them. Jackson continues to present his own style of tough, with a stare that can be almost as intense as Clint Eastwood’s or as psychotic as Mel Gibson in Lethal Weapon.  Jackson’s physical actions and facial expressions can say a thousand words, as long as they end in MotherF(*&er! He will play the hero or the villain with equal alacrity, and even actually play in a movie with out swearing (re: Star wars franchise). He is a talented actor with a specific flair that will be hard to reproduce when he has retired from acting. Jackson’s portrayal of this iconic character from the 70’s was and is still enjoyable.

There were some additional supporting characters that are worth mentioning. For example, Titus Welliver as special agent Vietti. He was J.J. (Usher) supervisor and plays an assh…e to a T. Does not matter what role I have seen him in, he will be a crooked cop, hit man, CIA agent etc. and present it in such a way that you love to hate him. Just goes to show how good he can be. While he did not have much screen time in Shaft, he did still manage to exude the same feelings when on screen. So kudo’s to him for continuing to perform in the niche that he is best known for. Additionally, I have to mention Luna Lauren Velez as Bennie Rodriguez. I had first noticed her in Dexter as the incompetent and insecure Lt Maria Laguerta, while not a fan of the character, she is much like Welliver. It does not matter what role she plays; I just don’t like her character. As a crook in this film, she continues to demonstrate that she is a niche actress that can play an unlikable character at all times. In both instances, even though I did not like the character, I can appreciate the performance and what they contributed to the overall product.

Now the big question, were we entertained? Yes, we were. The film had enough action, comedy and plot to keep us watching the whole film. Jackson in essence was the film and he brought the rest of the cast along for the ride. While the plot was a little lame at times (i.e. the reason behind the friend’s murder and what was being covered up), it did not really matter. Jackson’s profanity laced dialogue, raised eyebrows and penchant for using fists/guns to get his way carried the film. If you want to escape for a few hours and if you are a fan of Jackson’s style of acting, then this film is for you. If you don’t like profanity in films, crude one-liners and a thin plot, then you might want to keep scrolling through the Netflix menu. For us, as fans of him and his films, we will give Shaft a rating of: 6/10

If you are interested in watching further films/shows from the key characters, consider the following recommendations.