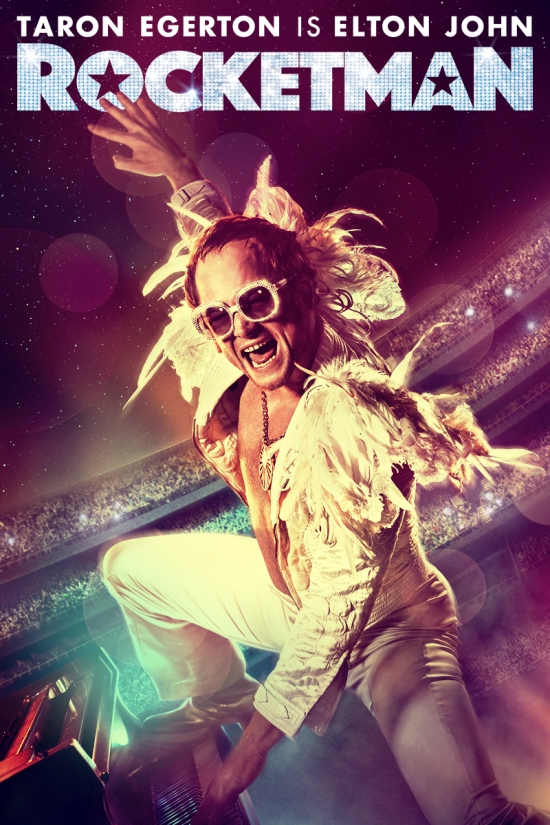 Trying to pick a film that was a little different to review, I chose Rocketman for this week’s selection. I did not have to read the back of the box, or search IMDB to find out what this film was about before putting it into the player, as I was very aware of the subject matter itself. This Biopic of Elton John received rave reviews when released in the theatres, won over 20 awards from the various academies, critics and award shows, up to and including an Oscar. Additionally, Taron Egerton was lauded for his performance and when I heard about the film last year, it was actually one that I was looking forward to watch.

As a youth, I thought Elton’s music was OK, some songs caught my ear, but his style of music did not go with what I listened to in my adolescence. Back then, and even today, I was more of a Bob Seger, Lynard Skynard, AC/DC, The Clash, and Eric Clapton fan, but as previously mentioned, I did not mind his songs at the time. As I got older, I found out that more and more of his songs were easy to listen to, and were superior to the Rap and Alternative music that permeate the airwaves of today.

So, with all that in mind, I put in the disc, and waited for the film to start. Right out of the gate I was surprised, and not pleasantly. I was under the impression that this film was his autobiography and would surely have some songs in there, but I did not expect an almost rip-off of the style used of music/film that was Mama Mia a few years ago. Now, Musicals are not really my type of film. I think I can only count on one hand which ones I have watched and enjoyed over the years. For example, yes, I did like Mama Mia, not for plot line or “expert” singing by Pierce Brosnan, but primarily for the scenery and photography. We love the Greek islands and this film reminded us very much of our previous holidays.

It was not until Taron Egerton appeared as Elton John that I actually started to enjoy the film and the music. Egerton does a bang-up job in this role, his mannerisms, appearance and vocal range were very similar to Elton himself and were actually very believable. He embraced the role wholeheartedly and his natural charisma and talent were apparent in every scene. As this film was a biopic of Elton John’s life, and from what I saw in the extra’s and what I have read, it was a fair representation of his life and there were not too many instances of creative license throughout the film. The film meshed Elton’s songs with various scenes and occurrences in an admirable manner. Much like other musicals of the same genre have over the last number of years.

What did I like about the film? Well, I thought that all period sets were excellent and bang on. The cars, styles, props brought back many memories for me. Even some of the clips of the concerts and Elton’s more outrageous costumes reminded me of newscasts and television coverage of his concerts. These nostalgic memories helped me enjoy the film even more. Additionally, I always will enjoy if an actor does the stunts/vocals themselves rather than having a stunt double/lip sync a scene. I found that Egerton’s own voice was used in the songs, and I was quite impressed in his vocal range and how much he could imitate Elton’s style and delivery of the music. The script was solid and the chemistry between all the main characters was strong which further added to the films enjoyment.

What didn’t I like about the film? As I mentioned previously, I am not a fan of musicals, especially when they will just break into song/dance in the middle of the scene and a plethora of actors/dancers join them coming out of nowhere. This type of cinematography is not exactly my cup of tea, and I found that when these scenes occurred, I tended to pick up my tablet and start surfing. Mind, you when he would sing for a concert, editing, memory sequences, I found that quite different and would watch/listen to the whole thing, I am sure it just a matter of personal taste. Additionally, I also found the early sequences with Elton as a child to be lacking in both substance and chemistry. Again, this was my own personal opinion of this, and I am sure that others opinions/viewpoints may differ. Other than those issues, there was nothing else that really stood out for me as something that I would pan or slam as a fault.

At this time, lets take a look at the primary cast of Rocketman:

Taron Egerton as Elton John: After watching Egerton in Robin Hood which was a complete and utter mess of a film, I was pleasantly surprised to see how well he did in this film. In my opinion, he emulated Elton in all facets, from mannerisms, voice, and probably most importantly, physically. When he was on screen, he was Elton John. As previously mentioned, I was very impressed with the fact that he sang all the songs and that they were not dubbed. This was a talent that I was unaware of from watching his previous films. His chemistry with co-stars was enjoyable and present throughout the film. He actually displayed more talent in 5 minutes of this film then he did in all of Robin Hood. I truly hope that he continues to take roles that showcase his skills, and that are actually good, then taking a film for a quick buck.

Jamie Bell as Bernie Taupin: I have always like Jamie Bell in films. His characters always deliver and I find his performances worthwhile. I really did not have any foreknowledge of Bernie Taupin, so I had nothing to compare him to, was he like the real life person, did he resemble him. In that aspect I do not know. However, the character, as was the person in real life was important to the success of Elton John (and the film). He worked well with his co-stars and I found that all his scenes were solid and nothing was held back.

Richard Madden as John Reid: Well in Madden’s case, I have only seen him in one other role, and that was as Robb Stark in “Game of Thrones”. So no matter what I see him in now, he is Robb Stark to me. Now, having said that, Madden played his role as Reid admirably. He came across as a bit of smarmy A..h..e, . From what I have read about him with respect to this film, in life they had a very ugly parting of ways, primarily due to finances in Elton Johns career. What I did read, and what was not really represented in the film was that they were partners/lovers for 5 years, but he still managed him for another 20 plus after that. The film did not truly represent the relationship in enough detail to get that part out. But, this was a film about Elton John, not his manager. Overall, not a bad performance from Madden, (or from Robb Stark), I have seen that he has done a few other roles are on my “to watch list” i.e. 1917, Medici, Bodyguard, and I hope that he does just as well in those roles.

Bryce Dallas Howard as Sheila: This was a complete surprise to me, when Howard came on screen as Elton’s mother, I was thinking, I know her, what did I see her in? Once I looked her up on IMDB, I then placed her in the Jurassic Park franchise. Her transformation into the role of Sheila was very admirable, and completely believable. I liked her chemistry with Elton (at all ages) and also how she managed to show disdain at the drop of a hat. I found her performance here to be far more challenging and enjoyable, then what I had seen her in before. I really believe that we will see her in far more demanding pictures that will be able to demonstrate her true range of skills and that her career will go very far, just as her father did before her (Ron Howard).

Steven Mackintosh as Stanley: Mackintosh played the uptight British stereotype to a Tee. His cold attitudes to his son and wife were portrayed in such a way to make you instantly hate him. If Elton’s father was like that in real life, there is no wonder why he may have developed some of his own emotional issues. While he did not have a lot of screen time, and if his representation was true, it did have a lot of impact on Elton’s life. Looking at IMDB, I see that he is an actor with a huge resume, however, I can only say that I had watched just a few of the shows that he took a role in.

Now the big question, was I entertained? After the film’s slow start, I would have to say yes. Egerton was incredible in the role as Elton John and made me believe that it was him. His own personal talent for singing came through to help ensure that the film was enjoyable. Depending on your taste in film, you may have to suffer the first 20 minutes (like I did) before the film picks up. However, if you are a fan of his music, I have no doubt that you will enjoy the film.

If you are interested in other films starring the main cast, please consider the following recommendations: