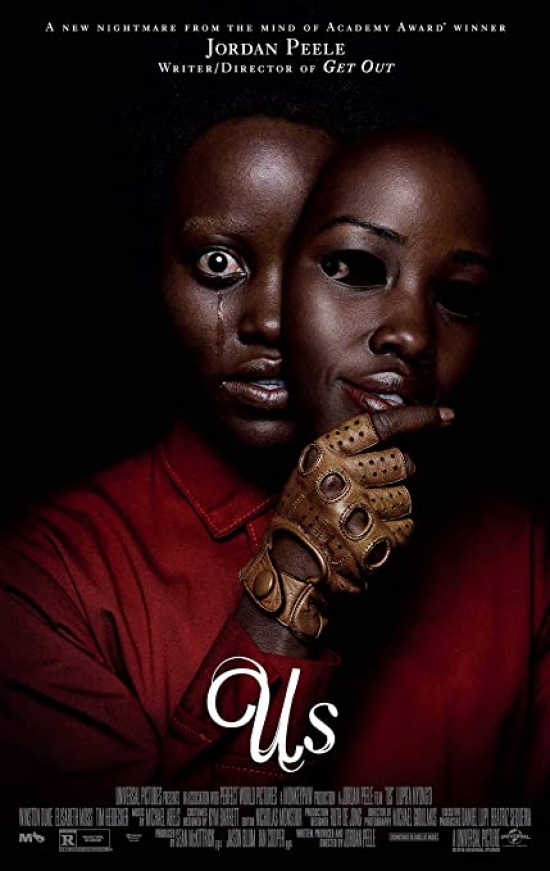 Well, it has been a few weeks since my last review. This is due primarily to the fact that every movie we tried watching over the last few weeks was discarded halfway, and of course the drama that was the US Election. Watching the debates, news conferences, and various speeches were in fact entertainment enough without having to go to a film. So, since we didn’t watch a horror film on Halloween, we tried one for this weekend. The next one to watch was the movie “Us”, which was written and directed by Jordan Peele. I was expecting something really unique and new from Peele, as my wife and I really enjoyed his last film “Get Out”, which surprised us at various times, not to mention his unique and different style for a movie of the horror genre. “Us” on the other hand, was quite a bit more predictable, and not as well written or acted.

The film opens with scenes of a little girl and her family at the fair. They are enjoying a night out when the little girl takes off and enters a “house of mirrors” where she then sees a reflection of herself that does not seem right. Besides the house of mirrors, there is also something that seems a little off with all the characters in the whole opening sequence. However, you, the audience will already get a sense of where this film is going at this point.

Fast-forward in time and we find out that “Us” is a film about a family who is taking their summer vacation at their recently deceased grandmother’s beach house. As many families do, they are having their own issues as a family. We have Adelaide (Nyong’o), who is an introverted mother, who really doesn’t want this vacation, (well at least the destination point), Gabe (Duke) the father (with a penchant for Dad jokes, and total obliviousness of his family’s wants), the son, Jason (Alex), a nerdy, slightly pyromaniac, wannabe magician and Zora (Joseph), the daughter, who is an athlete and just wants to have a good time. Throughout the car trip, Adelaide (Nyong’o) continues to have flashbacks of the night at the fair and we see that she is becoming more uncomfortable the closer they get to their destination. After a short time, this “normal’ family arrives at beach house after this tortuous drive.

The father Gabe (Duke), unwittingly increases the tension and family angst when he convinces Adelaide (Nyong’o) that they are to go to the beach to spend a day there with some friends, Kitty and Josh (Moss and Heidecker respectively). They go, have some “critical” dialogue with their friends, have an intense moment or two, and then throw in a couple of flashbacks for Adelaide to increase the tension before returning home. Once home, tension is further increased amongst the family, ranging from the father’s latest acquisition of a questionable speedboat to how Gabe (Duke) doesn’t listen to Adelaide (Nyong’o). Suddently, Jason (Alex) spies a family at the end of the driveway just staring at the house.

At this point, this is where the horror film starts and the drama ends. The family at the end of the driveway are doppelgangers of our intrepid heroes. Dressed in red jumpsuits, which appear to be rejected uniforms from “Orange is the new Black”, these duplicates (and others) start to terrorize the family and the surrounding countryside. I don’t really want to give out too many spoilers at this time on who they are, where they came from and what their goal is, but needless to say that our heroes fight the good fight, the doppelgangers origins are revealed, and the “twist” at the end, is actually very predictable if you paid a modicum of attention while watching the film.

What did we take away from this film? Well, throughout the opening sequences we see some dramatic foreshadowing on what will later be critical points within the film. Some of them are a little subtle, others hit you with a brick. Thus my comment about the film being predictable. The acting was so/so, and the script was mediocre compared to Peele’s previous outing in “Get Out”. The characters played by Moss and Heidecker were very one dimensional, and did not really add to the plot at all, well except maybe to provide targets of opportunity to the doppelgangers. I did enjoy the father’s (Duke) character, with his limitless dad jokes and continued attempts to please his wife and children, not to mention his own inner child. His acts of bravado when confronted were also well done.

I actually really liked the concept behind the film, and was hoping for it to be delivered with tension and excitement, however, at times I was disappointed. Specifically, when some of the co-stars or lesser characters were involved. With a little more attention to some of the backstory and the supporting cast, I think this film could have had more oomph. I must add that some of the doppelgangers, specifically the children played by Joseph and Alex were done well, while Adelaide (Nyongo’s) character would be detailed and complex in one breath, and then revert to almost comical actions or dialogue in the next. In my opinion, further development on the why and how the doppelgangers came into being would have provided a little bit more insight to the film. As it stood, it left to many holes to figure out, and actually gave too many openings for confusion.

Now to look at the cast;

Lupita Nyong’o as Adelaide Wilson/Red: In my opinion Nyong’o gave a mixed performance. I know it is difficult to play multiple roles, and I give credit to her and the whole cast of “Us” for doing so. However, I must say, in “Us” I did not see the span of her talents like I observed in the first film I saw her in “12 Years a Slave”. Her Adelaide character, while not bad, could have been amped up a bit, while I found her doppelganger “Red” to be almost comical. The voice that she used as “Red”, while explained later as to the reasoning, did not actually really fit. At times, everything seemed a bit stilted and uneven, but,  overall it was not bad. Not her best work by far, but still better then I have seen from others in this genre.

Winston Duke as Gabe Wilson/Abraham: As the father, I found Duke very entertaining, from his lame Dad jokes, to displaying his bravado or machismo when called upon. His character was enjoyable and well acted. As Abraham, he really did not do much except grunt and fight/attack. Even though he looked familiar, I could not place him in other roles, it was not until I looked at IMDB that I discovered that he had been in the Avengers/Black Panther franchise, and then I remembered who he was. Overall, not a bad performance by Duke in this film.

Elisabeth Moss as Kitty Tyler/Dahlia: Moss was actually very disappointing for me. I first really noticed her in Mad Men, then going back I found out how many shows/films she was actually in. Her character here was a caricature. Nothing substantial about her role or acting at all…not even her death scene (sorry for the spoiler, but it is a horror flick, so you know lots of people are going to die). Overall, pretty much a wasted character that really could have been just any 3rdactor/actress, or even excluded from the story all together. Very disappointing.

Tim Heidecker as Josh Tyler/Tex: Heidecker’s role was pretty much the same as Moss; a throw away performance that did little to add to the story or the excitement of the film. Apparently he has been around for a while in film, but obviously his performances have not left an impression on me. I was surprised to see that he had some bit parts in shows and films that I liked, but alas, I have no memory of the character or him playing in it. This will be much the same with this performance. This character, as in Moss’s could have been written out with no impact to the film.

Shahadi Wright Joseph as Zora Wilson/Umbrae: Of the children in this film, I liked Joseph the best. She did well as the teenager who just wanted to have fun without having her family (re mom and brother) giving her a hard time. Also, she played the dual role of Umbrae with a weird kind of intensity. She actually looked scarier then any of the other doppelgangers, and played the ‘evil’ role much better than the other kids.

Evan Alex as Jason Wilson/Pluto: Alex was not bad here either, not as good as Joseph, but still not bad. His character proved to be pivotal in the battle against doppelgangers, and his own doppelganger was portrayed as a mix of an extra from “Planet of the Apes”, Smigel from Lord of the Rings and a puppy. From a physical acting point of view he was pretty good in my opinion. However, I believe that with more maturity and experience he may develop into a very good supporting actor. Only time will really tell.

So overall, how did we enjoy the film? Were we entertained? Yes, mildly. As I have mentioned previously, this foray from Peele was not as good as his other movie “Get Out”, but was still not bad nonetheless. Even though we are not really fans of the genre, it still kept us entertained enough to complete the film. He (Peele) was effective enough in his “Dramatic foreshadowing’s” to keep us intrigued, even though the film writ large was pretty predictable. Direction/script was not bad, however, I think some of the characters (Adelaide/Red) specifically could have been enhanced with greater details. Additionally, some of the symbolism (rabbits) and the back story could have been either explained in greater detail. It would not have been necessary in the start (as it could have really given away the story) but as an epilogue if you will. Overall the acting was ok, but as I had mentioned previously, I felt that some of the characters could have been written out with really no impact on the story at all. I would recommend this film if you are a fan of Peele’s work specifically and secondly, a fan of Nyong’o. If not, move onto another horror classic like the Exorcist or even Peele’s previous movie Get Out.

If you are interested in other films starring the main cast, consider the following recommendations.