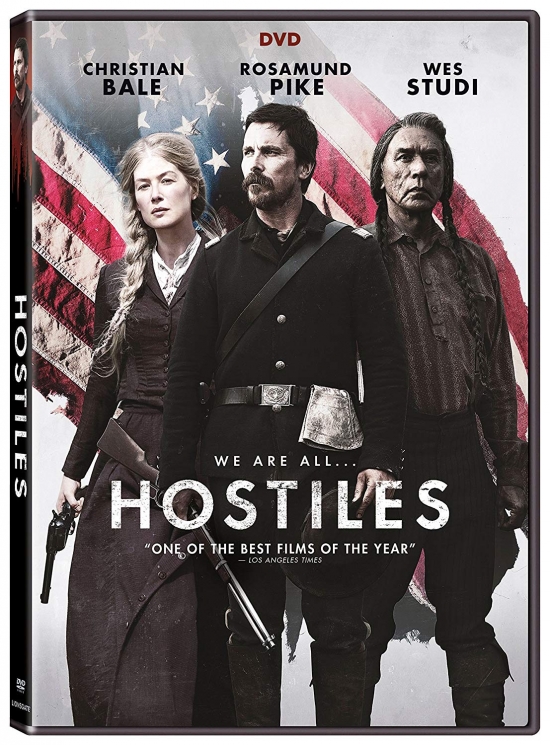 This week we went for something a little different and selected a Western from my stack of movies that are “yet to watch”. It looked promising as on the cover it had Christian Bale, Rosamund Pike and Wes Studi. All of the aforementioned actors have been in movies that I have really enjoyed, so I was looking forward to the change of pace from either the Sci-fi or bargain bin movies we had watched over the last few weekends.

Well, this movie was ok, it was not great, but it was not fecal matter either. Before getting into the pros and cons of this film, we will provide a quick synopsis of the plot.

Capt Blocker (Bale) is coming to an end of a 20-year career in the US Calvary. From what is gleaned throughout the film, he has spent the predominant part of his career fighting the Indians on the western frontier. Prior to his retirement, he is given one last task, to take a detail and escort Chief Yellow Hawk (Studi) and his family to his tribal lands so that he can die from the cancer that is killing him. Apparently, Chief Yellow Hawk (Studi) was an old adversary of Captain Blocker (Bale), and after displaying great reluctance to accepting his orders, the Commanding Officer Col Biggs (Lang) threatens him with court martial and loss of his pension. Naturally, Blocker (Bale) acquiesces to his CO and takes on the task. He gathers a detail of troops (A Lt, Master Sgt, Cpl, and Pvt) and heads out with the Chief and his family.

Along the way, they hook up with Rosalee Quaid (Pike) who is the lone survivor of a Cheyenne attack on her home and family. They bring her along, stopping off at another fort along the way, where they gather another soldier, Philip Wills (Foster) to escort to another place where he can stand trial for crimes while in the service and get ultimately sentenced to death.

Throughout the journey, they get attacked by the Cheyenne, Wills, and a Rancher and his boys at their final destination. Not only were they attacked throughout the journey, but somehow all the main characters come to their own revelations (good and bad) about their past, learn to cope with the change and become for the most part, better human beings.

Now that the synopsis is done without giving out too many plot points, will take a look at the performances of the main characters in this film.

Christian Bale as Capt Blocker; Bale has been in many fantastic films and is an extremely accomplished actor. On his resume, besides the Dark Knight trilogy, there is American Psycho, Ford v Ferrari, 3:10 to Yuma, Prestige, Rescue Dawn and Equilibrium, all fantastic films. In this role, he did not really stretch his acting talents, but played a stoic Calvary officer who is fighting his own internal demons as a result of his actions during the Indian wars. His performance was not extraordinary, but it wasn’t horrible either. He worked with the script and role and that was given to him. Not one of his best movies, but also not his worst either.

Rosamund Pike as Rosalee Quaid; even though she has been around for a while and gotten her first big break in the Bond movie, Die Another Day, I really started paying attention to her films after watching Gone Girl. She did a fantastic job there portraying a twisted and psychotic individual who manufactured her own death to get back at her husband. I also read the book, and her performance did not disappoint when compared to the character in the novel. However, in this film, she seemed to fall a bit short. As the lone survivor of an Indian attack that killed her husband, 3 children and burnt her farm, she recovered rather quickly. There is one scene in particular that I thought was well acted; after Capt Blocker and his men repel an attack from the same band of Indians who killed her family and destroyed her home, Rosalee (Pike) obtains a revolver and continues to shoot a fallen Indian in revenge for her fallen family. She keeps pulling the trigger even after all 6 bullets have been expended into the dead man. She is in a trance, does it well, and this action would be something that could have been expected as a survivor. Meanwhile, the rest of the men, watch her do this and let her vent her anger. It was a telling scene, but they did not build upon it as they could have. Was it the scene that she vented all her anger against Indians and she could move on and live her life again…I don’t know, but to forgive and forget so soon after the attack on her family would be a stretch for anyone.

After this scene, with Quaid being initially scared and/or repulsed by Chief Yellow Hawk and his family she seems to grow to not only respect them, but also care for them as well. She also starts to portray increasing feelings for Blocker (Bale) as their adventure continues. Ok, the story line represents about a few weeks of travel, would it be natural for a grieving widow/mother to fall for someone else that soon after the death of her husband and loved ones…I don’t think so. However, her performance was not bad, she has done much better, and I am sure much worse in her films.

Wes Studi as Chief Yellow Hawk; Now you cannot have a western without having Wes Studi playing a pivotal or major role in it. He is one of the Hollywood go to people when they need an aboriginal man to play either a warrior or chief. His roles in Hell on Wheels, Seraphim falls, Lone Ranger, Crazy Horse, Last of the Mohicans to name but a few were all excellent. Hell, Studi was also in Avatar as one of the inhabitants, while not necessarily an indian the Na’vi were symbolic of the Indians and their plight in North America.  For all intents and purposes, Avatar is basically “Dances with Wolves” as a Sci-Fi movie. As Chief Yellow Hawk, Studi continues to portray the stoic yet brave Chief who not only has a great deal of personal honour, but also demonstrates respect and forgiveness to Blocker as the film progresses. He does not fail to deliver in this film and I enjoyed his character throughout the movie.

Ben Foster as Philip Wills; Foster has acted with Bale in 3:10 to Yuma, a western that was truly enjoyable. Foster continues to take roles of people with questionable character, and does so here. Throughout his time on screen, it is revealed that he has committed various atrocities and crimes that he will have to pay the price for at the fort when delivered. Either it is his personal character or his skill in acting, in almost every film we have watched him in, I did not like the character, as it was a person who was a bit slimy, untrustworthy etc. The only exception to this rule was his portrayal of Axelson in Lone Survivor.

Stephen Lang as Colonel Biggs; I always Lang in his films, while he does not stray from the stern soldier/warrior, he knows his arcs of fire and does them well. It is also interesting to note, that he was also in Avatar, as the Colonel in charge of the military detachment…so you see, he knows his limitations and stays within them. However, I do like his character and his intensity that he portrays in any film, and his short appearance in this one, was right on track.

The remaining supporting actors were fine, nothing special or unique in their performances. They managed to provide the main characters with the impetus for their decisions and growth.

What didn’t I like about the film; well there were a few things that bothered me. The main one was one of logistics. Throughout their travels, they only had two packhorses to carry all of their supplies. At their point of origin, the Captain is informed that they have enough supplies for a month, including weapons/ammo. Well I am sorry; 2 horses could not carry enough supplies for 10 plus individuals for a month. Not only did they carry the food and ammo, they also seemed to have enough tents, cooking utensils, chairs, tables, lanterns, shovels, picks, and whatever else the script seemed to think they needed on hand…this was a little out there. I did not even have to rewind or analyze the film, it was blatantly obvious.

Another thing that bothered me a bit was the fact that a detail was formed with two officers, 1 Master Sgt, a Corporal and a Private….man, who would want to be the private in that kind of outfit. You know that all crappy jobs would be detailed to you….to many supervisors here and that would never happen. Not to mention the fact that for the late 1800’s, black soldiers were not integrated with the rest of the military. Only a few Regiments existed with black soldiers, who were commanded by white officers. There was no integration of races at that time within units, even on the frontier.  However, a movie that portrays black servicemen in the 1800s (Civil War) that is well worth watching is Glory (1989), highly recommend this film if you want watch a great Civil War movie with a stellar black cast (Morgan Freeman, Denzel Washington, Andre Braugher) and in a film that is closer to fact than fiction.

Additionally, I felt that in the case of Quaid (Pike) she recovered to quickly from the loss of her family to acceptance of her travelling companions. I am not saying that someone cannot forgive, or forget, but I feel that this was too fast in this case, at least in our opinion.

Overall, the film was not too bad, we were entertained enough to follow it through. There were some solid performances from the main characters, and the scenery and cinematography was quite good. However, be advised that movie for all intents and purposes is basically an allegory of how the white civilization has treated the indigenous people of America throughout history.

One thing the film did do was generate a discussion between my wife and I about PTSD and the trauma’s of war. While the film did address it in its own way, specifically to demonstrate that these issues have been and were always present. This just goes to show you that not only can a film entertain you, but if it makes you talk about the issues and stimulate conversation…then it also deserves a mention.

Besides the aforementioned comments, our rating also includes the errors of the film (i.e. the unlimited supplies, integrated units, un-equal rank distribution and also the magic weapons that never seem to require reloading), we felt that it was stil …OK.

Here are some recommendations if you want to see further films with main cast: