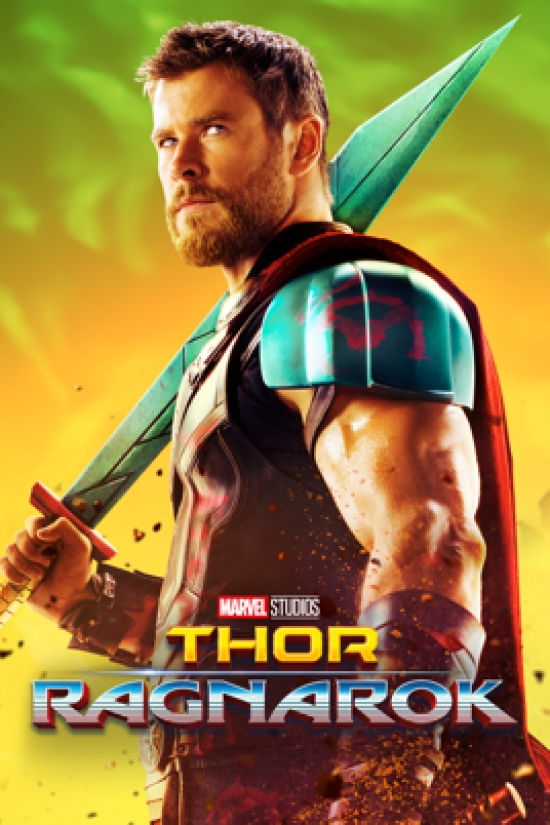 This weekend we finally left movies from the Bargain Bin and decided to watch one of the blockbusters of 2017. This was Thor: Ragnarok, the third in the THOR series and the 17thif you watch the movies from the Marvel Cinematic Universe (MCU) in order. Actually we watched this movie right after Deadpool 2. Both are Marvel, however Deadpool does not fall into the MCU order. Now why am I reviewing Thor vice Deadpool? Deadpool 2 was a great movie, lots of laughs, incredible action and CGI, however, it was pretty much exactly the same as the previous Deadpool, Thor: Ragnarok was actually different from its predecessors and from our perspective the best of the 3 Thor movies.

I was always a fan of Thor, or actually the whole Marvel line up, since I was a kid. But Thor was always different, he was a god right?!? Not just having superpowers by either science or an accident, he was born with them! That is what made him one of my favourites as a child. The Thor movies to date have been good, his appearances in the Avengers or with the other MCU characters have been value added, but in our opinion, In this movie, the characters and story line were all much better.

For a quick synopsis of the film, (if you are one of the few who did not watch it): Thor (Hemsworth) returns to home after defeating yet another monster who threatened to destroy Asgard in the final battle (Ragnarok). Once back on Asgard, he discovers his father is off world, exiled if you will. Loki (Hiddelston) is pretending to be him and pretty much letting the whole empire go to crap.

Actually one of the surprises here was the cameo by Matt Damon (as an actor playing Odin in a play), it was truly hilarious and really set the tone for the rest of the film. This film, was not only going to be a typical Thor saves the world movie, but it was also going to having a bit more levity and not take itself so seriously.

Anyways, back to the plot, Thor (Hemsworth) shows Loki (Hiddleston) for the trickster he is and gets his assistance to find Odin (Hopkins). Naturally, Odin (Hopkins) is on Earth, well seriously, where else would he be, this is a Marvel Universe movie! So, with the aid of Dr. Strange (Cumberbatch) the brothers find Odin (Hopkins) discover that they have a sister, Hela (Blanchett), that they did not know of and that she was going to return and wreak havoc on Asgard, as some sort of revenge.

Right after meeting Hela (Blanchett), these brothers get their asses promptly kicked by their older sister and then “decide” to return home and leave her on Earth. While trying to return to Asgard with Hela (Blanchett) on their tails, they somehow get knocked off course and end up on a Garbage planet. When I say Garbage, I mean Garbage….hmmm…some kind of hidden metaphorical message on humanity and what we are doing to our own planet…probably…but I have digressed yet again.

On the Garbage planet, Thor find himself at the mercy of the Grandmaster (Goldblum) who has taken a page out of Caesar’s handbook, of giving the people what they want, “The Games”. The Games keep the Grandmaster (Goldblum) in power, keep him rich and ensure that the people are entertained. At this time, Thor hooks up with the Hulk (Ruffalo) in a most entertaining way, ropes in the Valkyrie and gets Loki and several others on board to return to Asgard to fight Hela (Blanchett) and save his home.

Concurrently, back on Asgard, Hela (Blanchett) is running things in a most tyrannical fashion with the aid of her trusty sidekick, Skurge (Urban). Asgard is in revolt, and Heimdall (Elba) is trying to organize the survivors of this tyranny and take them away to safety.

Thor and his team, the “Revengers” which basically is Thor, Hulk/Banner, the Valkyrie and Loki have return to Asgard, confront Hela, have a wicked battle with amazing fight scenes, humorous one-liners, and incredible special effects. Of course, Thor (Hemsworth) et al are victorious, it is a superhero movie after all, Hela (Blanchett) is defeated and all is now right again….well sort of.

So much for a brief synopsis of the film, however, I tried not to give out too many plotlines, or surprises….well sort of the ending, but like I said, it is a superhero movie, so you know Thor will win! It is not like I am giving up the farm here! Now what did we like about this, the third installment of the Thor franchise?

First, Hemsworth as Thor, the God of Thunder. His role here continued to build upon the previous renditions of the character and his representation in the third film was the best of the lot, at least in our opinion. Thor was a bit self deprecating, while still maintaining some of his smug “god-like” qualities that fans have grown to admire. His delivery of one liners, physical prowess and screen presence continued to add to the film, the role and the series. It will be interesting to see how the character continues to develop in the fourth film that is currently scheduled.

Tom Hiddleston continued to be a solid character throughout the franchise and in this film, you actually get to like him a bit. I am curious to see if his character will continue in the next film as when I looked to see who would be in Thor (4), I saw that only Hemsworth (Thor) and Thompson (Valkyrie) had signed on as of the time of this blog.

In our opinion, Cate Blanchett (Hela) was great. She is an outstanding actress whose presence can really command the screen and scene. She has an ethereal quality about her, and her striking features are unmistakable. She is equally talented playing a hero (Galadriel – Lord of the Rings, Charlotte Gray – Charlotte Gray), a supporting actress (Katherine Hepburn – Aviator) historical figures (Katherine Hepburn – Aviator, Queen Elizabeth – Elizabeth the Golden Age) or even a love interest (Daisy – Curious case of Benjamin Button). All roles are done with talent and skill, she is truly a talented actress and adds to any film that she is in….even in a stinker like “Indiana Jones and the Kingdom of the Crystal Skull” while a horrible film, her part was still pretty good. Overall, her portrayal as Hela the villain was excellent and she set the stage for one-liners and the action sequences with equal skill. Additionally, we really appreciated how she could look down on people as if they were just minions who had to do her bidding, no matter what. This was really apparent with her dealings with Skurge (Urban).

Speaking of Skurge (Urban), while not a major part of the film, he played an integral part of the plot at key moments. While remaining stoic for most of the film, he portrayed his inner turmoil as he transited from blowhard, coward, minion, to hero. His role could have been played up a bit more, but with an ensemble cast such as this, there is only so much screen time to go around.

Hulk (Ruffalo) was the Hulk, we got what was expected of the character and the CGI Hulk and Banner (Ruffalo) played a good straightman to the Thor’s one-liners. Great fight scenes, and also, as the Hulk had more lines beyond “Hulk Smash”, he proved to be quite entertaining.

Valkyrie (Thomson) was a welcome addition to the ensemble, with the demise of Thor’s Asgardian companions in the first few minutes of the film, it was nice to see other characters from the Thor universe come to light. I had seen her before in Creed and Copper and enjoyed her characters. She portrayed the tough female warrior with aplomb and style. It also proved to balance Thor in his quest.

As with all ensemble movies, there is usually a great supporting cast, Dr Strange (Cumberbatch), Odin (Hopkins), Grandmaster (Goldblum) and Korg (Waititi) and Heimdall (Elba). Hopkins as Odin, gave a solid performance as always and eloquently passed the torch to Thor (Hemsworth) nicely. The secondary antagonist, Grandmaster (Goldblum) was extremely entertaining. His character provided the opportunity each member of the “Revengers” to meet, fight, plan and gel as a team to save Asgard. Goldblum is always a solid performer and can be counted on too present interesting, albeit similar characters in all of his movies (Jurassic Park, Independence Day, The Fly), geniuses who are just a bit out there…but he does it with style.

Dr. Strange and Heimdall (Cumberbatch and Elba respectively) had relatively minor roles that aided the heroes in their ultimate journey to save the day. Having said that, it would have been nicer for Dr. Strange (Cumberbatch) to have a more integral role in this film, besides just being a member of the Avengers who helps Thor and Loki in the early parts of the film. Heimdall (Elba) while a more important character in earlier Thor movies, proved to be relatively minor in this film. It seems his major contribution was to look in the distance ….., well that was pretty much about it. I like his character and would have liked to see a greater role than what he was given. But as mentioned previously, with large ensemble movies, there is only so much screen time to go around.

Besides Matt Damon’s cameo in the opening of the film, one of the better surprise was Korg (Waititi) a sort of “Thing” knock off, came out as a very entertaining character. His one liners, delivery and CGI character was a joy to watch and I was looking forward to seeing him more throughout the film. I hope that his character returns in Thor (4), as it was truly enjoyable.

What didn’t we like about the film. Not much really, we had a great time watching it; it was full of action and comedy, and adhered pretty much to the superhero script of winning the day. The only things I would have liked to see would have been more of Dr. Strange and Heimdall in this film. Other than that, everything else was great and the film was definitely worth watching!

Were we entertained? Yes, Definitely! Looking forward to the next one!

Anthony Hopkins – Hannibal, The Bounty, Silence of the Lambs

Cate Blanchett – The Aviator, The Curious Case of Benjamin Button