A new main logo for Notinhalloffame.com! 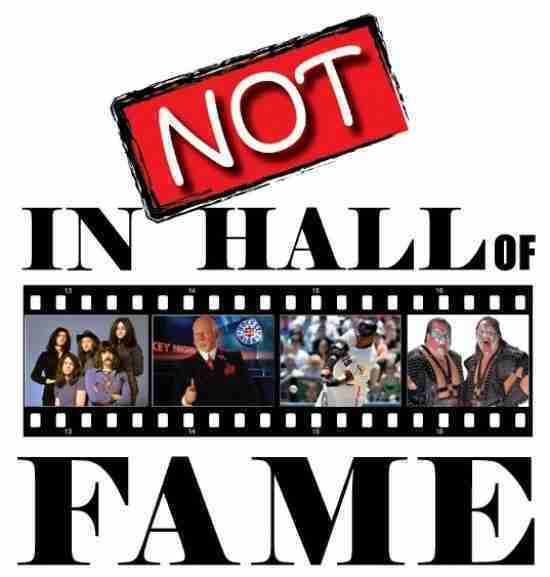 Maybe you noticed, maybe you didn’t, but we had a logo change here at Notinhalloffame.com.

Since the inception of our site in 2009, our core logo has always had an image of a filmstrip with four different potential Hall of Famers from respective fields.  We have alternated from Pete Rose and Barry Bonds for baseball[1], Don Cherry for Hockey and in the past we have had Alice Cooper, Rush, Kiss (who would all get in) and now currently Deep Purple representing Rock and Roll.

The WWE, had always been represented by an iconic picture of Randy “Macho Man” Savage holding the Intercontinental Title.  Savage had fallen so far out of favor with the WWE that it almost literally took his death and a few years in top of it to get him into the Hall.

With Savage’s induction, a new WWE figure was needed…something that pops out right away.

We have elected to go with former three time Tag Team Champions, Demolition.

I know what some of you might be thinking.  Ax and Smash aren’t even in your top twenty-five and there has been little push for them to get in.  That may be, however this was a very popular team in their day, and damned if that look doesn’t stick out on the logo!

Besides with Bruno Sammartino, The Ultimate Warrior and Randy Savage now in, the ones who are no longer active or deceased who NEEDED to be there are now there.  That makes the other spot a lot harder to fill, so why not with a tandem of a former Masked Superstar and Soviet sympathizer?

For the record, here are the other wrestling personalities that had been considered to take the spot of the “Macho Man” on the Notinhalloffame.com logo.

So there it is.

Who will be the next one from our logo who will have to be removed because he/they got into their respective Hall of Fame?

As always, we here at Notinhalloffame.com would like to thank you for your support and look forward to your feedback!

[1] With the PED controversy, it seemed more appropriate to interject a steroids guy over a gambler.  Notice we didn’t say “inject”!

More in this category: « Brian Westbrook and Maxie Baughan to the Eagles HOF RIP: Frank Gifford »