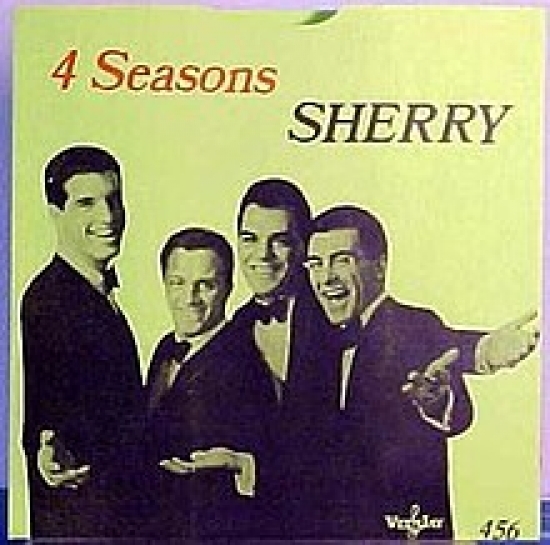 Sheila gives way to Sherry and coincidentally it wasn’t all that long ago that my wife dragged me to see Jersey Boys, the play about Frankie Valli and the Four Seasons.  As I discussed before, I have never been a huge musical fan, nor am I really into plays in general, though I do respect the art.  Here is what I haven’t discussed before; I don’t care for the Four Seasons at all.

Yes, I know they were one of the biggest groups of the 1960’s, and they are legitimate Rock and Roll Hall of Fame inductees and when they crowed how they stood up to the British Invasion that isn’t inaccurate as they were one of the few American groups who existed before 1964 managed to be successful when almost every group (Motown excepted) faltered.  It’s a hell of a legacy, and yes one worthy of a hit Broadway musical, yet whenever I hear one of their songs, I tend to turn it off.

Why?  I just don’t care for Frankie Valli’s voice.

I found that high pitched falsetto of Valli’s…well…too high pitched!  Maybe because I am of German descent from Canada, I couldn’t initially figure out how the East Coast Italian American demographic saw this group as manly or iconic, especially this group I found so whiny as their lead singer’s voice.  The music didn’t sound tough to me, but that was the subconscious stereotype I appropriated to Italian Americans though that was from watching the Rocky movies too often and of an ex co-worker of mine who really did adopt every Italian stereotype.[1]

Like so many other number one songs where I struggled to understand the appeal of the chart-topping artist, I binge listened to the music of the Four Seasons hoping to gain some kind of understanding as to why they are/were so popular.

I still didn’t get it.

I changed my approach and took a look at the group itself, and stripped away the music, which while that seems like a stupid thing to do to understand the band’s appeal, it did give me a completely different opinion as to their path to stardom.

The first thing is that this wasn’t a teen or early twenty something group or a much older easy listening act.  The Four Seasons were in their late twenties and had been trying to make it for a decade.  Frankie Valli made his first record as early as 1953 and the group in an earlier incarnation as the Four Lovers had a small regional hit in 1956 called “Apple of My Eye”.  Valli, whether it was as a solo artist or as a member of his group failed time after time to be a star and if he or the rest of the group would have given up, not too many people would have blamed them, but it was that hard work and dedication that appealed to an Italian demographic who for the most part in America in this era were blue collar and could identify with the lunch pail work ethic.

The second was that the group didn’t look like teen idols or pretty boys.  They had the features of dockworkers and looked like guys from the neighbourhood who made it; basically, it was like one of your own was becoming a star.

The third was staring me in the face the whole time.  Most of the doo wop songs that had been successful were performed by either African or Italian-Americans, basically the tradition was in that community all along!

Now while I may not have cared for Valli’s voice, millions of people did and the combination of his vocals, bandmate Bob Gaudio’s songwriting and the production of Bob Crewe[2] a formula for American stardom; an elixir that began with “Sherry”.[3]

The Four Seasons had finally arrived and thousands of girls named “Sherry” would endure for years men attempting to sing their name like Frankie Valli did and the boys from New Jersey would become Billboard staples for the rest of the decade and would hit the number one slot a few more time before it’s all over, although it will still feature that high pitched squawk I can’t for the life of me listen to for more than ten minutes.

[1] This is no exaggeration.  Most of the customers or associates he had when I would see them would break out into exaggerated impressions of him to the point where they all sounded like Peter Griffin from Family Guy doing his Italian bit.  If I didn’t know better, I would think that he put on that persona on purpose, would come home and laugh with his family at all the people he fooled with his exaggerated “Italian” mannerisms.

[3] Yes, another pun, but this one was completely inadvertent.