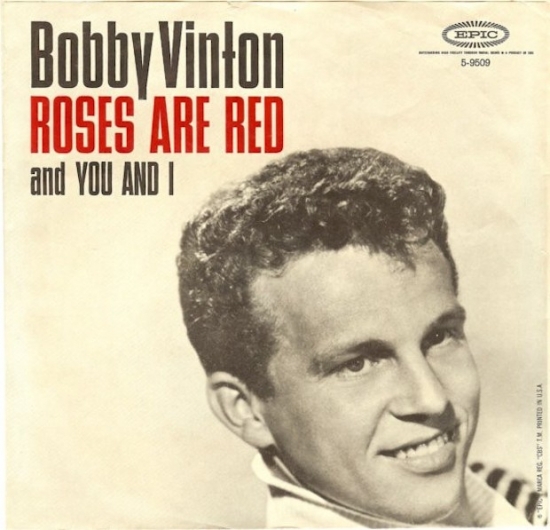 Sugar is Sweet (My Love)

But Not as Sweet as You

That is the famous croon from Bobby Vinton’s first single, first hit and first number one, and even if you have never heard this song in your life, chances are that the you utilized the “Roses are Red, Violets are Blue” part and added your own little spin on it, or heard a variation on it.

There are quite a few people who know Vinton only for this song, or perhaps for “Blue Velvet”, another one of his number ones that will be talked about later.  Vinton actually had a significant amount of hits in the 1960’s and is one of the more successful performers of the decade.  So why is it when I think of the musical scene in the 1960’s, he hardly comes to mind?

I spend a few hours listening to Vinton’s hit singles, and while they were all songs I had heard before, I was trying to figure out why this was an artist I really didn’t care much about.  After an extended listen, I still don’t really care for his music, though I don’t hate it either, but by no means does my approval make someone successful.  Now while I won’t be using I-Tunes to purchase Vinton singles I really came to understand how he had this broad appeal that allowed him to not only be successful in the early 60’s, but also actually crack the top of the charts during the British Invasion.

While some classified Vinton as a teen idol, he didn’t make it until he was 27.  While he may have sounded manufactured to some, Vinton was a man who in his youth had mastered multiple instruments and peddled that first record, “Roses are Red” himself to radio station after radio station.  Although his name was Vinton, he was of Polish descent and could tap into that market.  He wanted to be a big band leader, but lent that sophistication to a more pop style, which allowed him to tap into the younger market.

With “Roses are Red”, Vinton crooned a song that could be perceived as youthful and sweet for the teen set yet had an arrangement that worked for those who were older.  Automatically, Bobby Vinton emerged as a musical star that had a larger age demographic than most other stars.  This had to be why Vinton was able to survive the changing climate where so many others dropped off the face of the musical earth.

Vinton will be appearing three more times in this book, but for me “Roses are Red” will always be the song that he sang at the Copa while sending wine over to Henry Hill when he took his then girlfriend Karen to see him perform.  If that didn’t bring Lorraine Bracco and Ray Liotta together what else could?[1]

[1] There are not enough books and essays written about Goodfellas.  Perhaps that should be a future project for me?

More in this category: « The Stripper Breaking Up is Hard To Do »