Breaking Up is Hard To Do 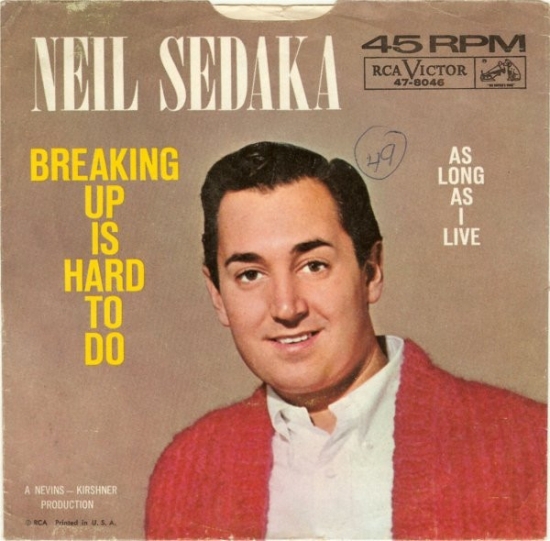 Breaking Up is Hard to Do

Again, I can’t help it.  If a song automatically makes me think of another pop culture aspect, I have to regurgitate to all of you.  It is like a dry heave after a heavy night of drinking…it just has to come out.[1]  With “Breaking Up is Hard to Do”, I have a song that echoes the original Beverly Hills 90210, though far more for how my wife remembers it.

With the knowledge that my wife will be reading this let me preface this by saying that she is the love of my life and the best thing that ever happened to me.  She also might be the most tone-deaf person and the worst singer I have ever come across, and this includes watching Bai Ling in the horrible celebrity reality television show, “But Can They Sing?”[2]

When we started dating, she informed me that she and a former roommate of hers wanted to sing on her wedding day, an observation that wasn’t really an issue for me until I heard her sing.  Thankfully, she pulled that from the table and now the rare times she does sing puts a smile on my face, especially when she mangles words, even as simple as the ones in “Breaking Up is Hard to Do”, a song that most people know as done by Neil Sedaka in 1962, but according to my wife is done by Emily Valentine, one of Brandon Walsh’s girlfriend’s on Beverly Hills 90210.

This isn’t leading to a top ten 90210 episodes as frankly my top ten is the same one ten times, the “Donna Martin Graduates” episode which was so ridiculous it was awesome.  It is even more so upon the knowledge from a Jason Priestly interview that the chant the cast did was “Donna Martin Masturbates” with the knowledge that it would be looped properly in post-production.

No, what this is a tune that my wife knows as Emily Valentine’s “Dum do be Dum Dum” song.

As for the rest of us, I will focus on Neil Sedaka’s version, which charted much better than Emily Valentines.

Neil Sedaka is one of the rare performers who had significant chart success in the early 60’s, who managed to strike Billboard gold in the 1970’s.  Sedaka had his first Top Forty hit in 1958 and would make the Top Five in 1961 with “Calendar Girl”, one of the more recognizable pop songs of the early 60’s and the song that really made him a star.  He would follow up with another big hit “Happy Birthday, Sweet Sixteen” (#6 in 1961) and with “Breaking Up is Hard to Do” the boyish voice would have his first Hot 100 chart topper.[3]

Sedaka was not just a performer; he was an accomplished pianist and songwriter and understood the pop landscape.  For a song about breaking up, Sedaka made it so upbeat that you couldn’t help but not feel so bad about separating from your loved one.  Even if you weren’t going through a breakup, the doo wop infected lyrics made it easy to want to sing along, and Sedaka scored what would be his biggest hit in the 1960’s, or as it would become known as, the first half of his recording career.

He would have one more Top Ten hit in the 1960’s (“Next Door to an Angel”, which went #5 in 1962) but he would fade out of the charts by the late 60’s, only to make a major comeback in 1974, which will be discussed here later, though it was not like he was out of music completely as his song writing prowess kept him engrained in the industry.

Sadly, when Sedaka returns it won’t have anything to do with the most famous zip code in America.

[1] Completely off topic (again), I don’t get hangovers anymore, and thus the dry heaving days are long over.  Even more random, I married who may be the only Asian girl who seems to be impervious to alcohol as she once did 37 drinks (15 of which were shots) and only had a buzz.  If there were an Indonesian drinking team, she would be the captain.

[2] Michael Copon, who was one of the Power Rangers, won the show.  As for Ling, she was every bit a trainwreck, but so bad that the audience kept wanting to see what she would butcher next.   Her version of the Divinyls’ “I Touch Myself” erased any doubt that she loved to touch herself!

[3] The song would go to number one in Japan.  According to an old friend of mine’s mother who was Japanese, the Japanese thought his last name that he was Japanese and were disappointed to find out he wasn’t.  Japanese people who were of age in 1962 can let me know if there is any validity to this.

More in this category: « Roses are Red (My Love) The Loco-Motion »