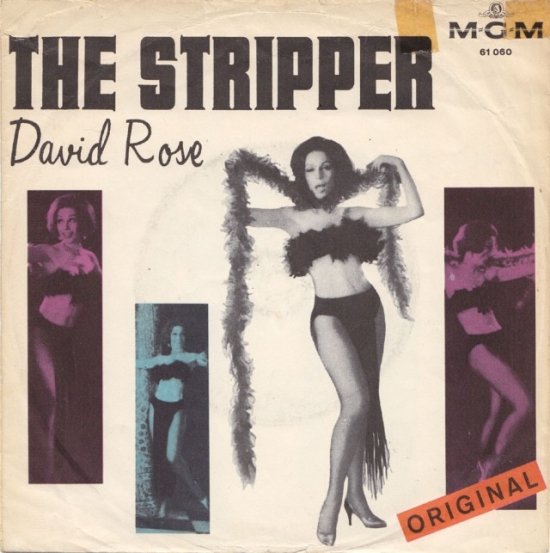 David Rose and his Orchestra

Hmmm.   The Stripper.  Why is that I feel this unnecessary need to divulge strip club experiences with all of you other than the fact I am the master of the incomprehensible segue?  As much as I know I shouldn't; I have decided to give you a brief synopsis in a PG13 version of my strip club experiences in bullet point form.

In Japan, I saw a room where businessmen were taken into so that they could be farted on.

Back home, I went with one guy who had never been into a strip club before, and he went into the champagne room for over ten songs, not realizing that it was a pay per song deal.  Since the Hell's Angels owned it, it was quite the awkward walk to the bank machine to settle up.

In the southern part of West Virginia, I saw a pregnant stripper with twelve teeth and missing at least two fingers.  The club was segregated where the white people were on one side and black on the other.  Since the stage attraction was bi-racial and I was traveling with a Jamaican, I wasn't sure what side we were supposed to be.

That was the moment I swore off strip clubs forever.  That and I got remarried.[1]

Now with that and my limited (and believe me compared to most of my male friends) strip club experience, I don't think I ever heard David Rose's "The Stripper" ever played.  Actually, I think the only time I ever saw someone strip to it, it was Ned Braden in Slapshot, which caused the Syracuse team to forfeit the game via protest and allow the Charlestown Chiefs to win the Federal League.[2]

David Rose and his Orchestra, who may not be the most recognized name in music even when he was successful, performed the song but did compose and arrange some of the more recognizable music in pop culture.  "The Stripper," while Rose's only number one hit, was not his only Top Ten as in 1942 he went number 2 with "Holidays for Strings."  Rose would become a Hollywood fixture, becoming a musical director with MGM and would be married to Martha Raye and Judy Garland.  He would even be nominated for an Academy Award in 1944 for a song he wrote. "So In Love” from the film, Wonder Man.

He would later become a television fixture, first as the musical director for the Red Skelton show (beginning on the radio) and then composing the music for television series such as Bonanza and Little House on the Prairie, for which he won three Emmys.

Rose would pass away in 1990, though I wonder if he ever saw anyone strip to the song that he made famous.  As for me, with my self-imposed strip club ban, I am pretty sure I never will, and Ned Braden doesn’t count!

[1] Ok, the second one played a much more significant factor in that.

[2] Braden (played by Michael Ontkean) was the best player on the team, but the fact in that film he was the 114th most memorable character.  The fact that he was stripping instead of fighting is likely why he gets no love in my Fictitious Athlete Hall of Fame.

More in this category: « I Can't Stop Loving You Roses are Red (My Love) »