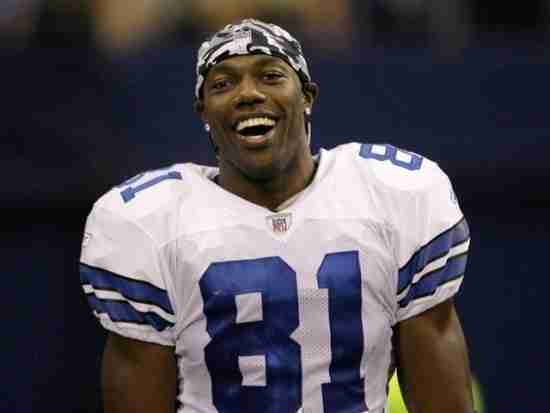 Terrell Owens
12 Mar
2016
Not in Hall of Fame
Last month, regular contributor, Spheniscus and I debated the Hall of Fame merits of those who were on the Baseball Hall of Fame ballot.

Chairman:  There are a lot of things that people remember Terrell Owens for and not a lot of it is good.  I get that, I really do, as the consummate team player he wasn’t, and he threw quarterbacks under the bus better than Ryan Leaf threw interceptions.  I’ll talk about the bad later, but for me Owens conjures up his Super Bowl performance with the Eagles, one that was overlooked because:

A: His team lost.

B. He hung Donovan McNabb out to dry after the game.

T.O. wasn’t exactly wrong.  His quarterback threw up during the spectacular and Owens was on fire in that game coming back early from an injury that the average athlete would not have been able to play in, and if they did, they certainly would not have had 9 Receptions with 122 Yards.

Owens was an elite player with the stats to back it up, but there is so much on the negative side of the ledger.

Spheniscus: To channel the Dave Chappelle show: “What can I say about Terrell Owens that hasn’t been said about Afghanistan?” I am just kidding about that. I think his rep is far worse than he ever actually was. And ultimately, he was right about the end of the Super Bowl. But he had the wrong guy. If the Pats – Chiefs Divisional Round game proved anything this year, it is that Andy Reid has no idea what clock management is.

Will T.O. get in? Yes. Just not this year. Remember how hard it was for Michael Irvin to get in. He actually got to be one of the final five one year and then didn’t get enough votes in the up or down session to actually get in. It delayed his entrance for a couple of years and started the backup at Wide Receiver that we are still fighting through today.

Marvin Harrison was clearly going to be the one to get in in this year. It also wouldn’t surprise me if one of the two Rams receivers he beat out this year, Isaac Bruce and Torry Holt, jump him and get in before he does as well.

This is his first of many times on the ballot. What will be interesting is next year when it very well might be Holt, Owens, and Randy Moss.

Chairman:  I don’t think it will be many times, but I knew it would be more than once, and I knew T.O. wouldn’t be quiet about.  I love how he doesn’t disappoint!

Sphensicus, did you see Mike Martz’ whine about Owens being a finalist and Bruce and Holt not being one?  I call it a whine because he used stats to illustrate his point, which is strange considering the stats say this:


Martz also discussed if his boys were below repute, but let’s face it.  This is football.  Do we really expect them to be?

Spheniscus: If there is one thing Rams personnel do well, it is whine. Although, I wonder how much the Rams move out of St. Louis leaves Warner, Bruce, and Holt as players without a fan base. That may hurt them quite a bit.

And I guarantee we will be discussing when is T.O. going to get in finally in 2019 and 2020. Moss will be in before T.O. Bruce may be as well. Heck, even Hines Ward who is eligible next year (and as I said in the Tony Dungy section is one of my most hated players of my lifetime) is probably even odds to jump T.O.

The voters do not like him. He really needed the Pats (who he tried out for) or some other team to pick him up this season. It would have delayed his eligibility and given the voters time to mellow on him. Otherwise now that Megatron has retired, we may be in a situation where we are comparing his numbers to T.O.s in 2022.

Chairman:  Wait a minute.  I smell a major beer bet coming.  I am going to give you the field.  I will take Owens.  T.O., whether they like him or not, is the next Wide Receiver going into that Hall.  My question to you is how many pints of hop and barley are you willing to do?

Spheniscus: A six pack of New England beers for each season (Sam Adams Cold Snap, Narragansett/Del’s Shandy, Shipyard Pumpkinhead, and Harpoon Winter Warmer). This is the easiest bet I will make this year. Since Canada doesn’t really have seasons, just degrees of winter, you can just go with a case of whatever you think is best.
Last modified on Saturday, 03 December 2016 17:50
Tagged under
Tweet