Terrell Owens to the San Francisco 49ers Hall of Fame 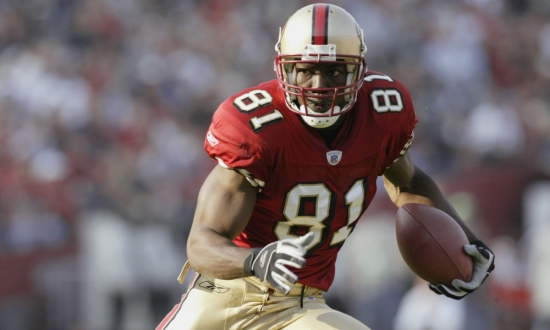 The San Francisco 49ers have announced that Terrell Owens will be the 28thmember of their franchise Hall of Fame.

Owens was a third round pick in 1996 from Tennessee-Chattanooga and as a rookie he would catch 35 passes for 520 Yards.  Over the next three seasons, T.O. would move up the ranks and would become the primary receiver with seasons of 936, 1,097 and 754 Yards respectively but in 2000 he would prove himself as an elite wideout with a 1,451 Yard campaign that earned him his first Pro Bowl and First Team All Pro Selection.  He would repeat those honors in 2001 and 2002 but would add another accolade he was the NFL leader in Touchdown Receptions. In his final season with the Niners, Owens would again be named a Pro Bowler.

While Owens was certainly a great receiver, he was a controversial player.  He was outspoken and could be divisive in locker rooms.  Still, T.O. was a phenomenal player who is second all time in franchise history in Receptions (592), Receiving Yards (8,572) and Receiving Touchdowns (81).  Owens would later play for Philadelphia, Dallas, Buffalo and Cincinnati and he would be chosen for the Pro Football Hall of Fame in 2018.

We here at Notinhalloffame.com would like to congratulate Terrell Owens for this latest accomplishment!