Hall of Fame no certainty for No.1 pick Burrow 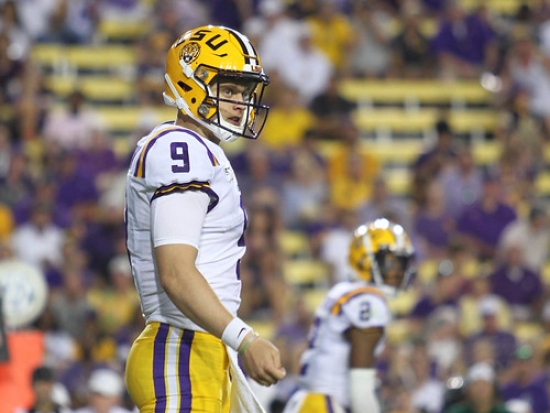 Joe Burrow was the No.1 pick in the 2020 NFL Draft when he was selected by the Cincinnati Bengals but can the former LSU quarterback follow his top pick in the draft with a 'Hall of Fame' career amongst the pros...?

The Iowa native enjoyed a stellar college career and is an enormous talent, having won the Heisman Trophy and Maxwell Award during his final year with LSU.

The signal caller has all the attributes to succeed in the NFL but history doesn't dictate that he'll transition from being first pick amongst the class of 2020 to becoming a hall of famer in the future.

Having grabbed its first College Football Championship since 2007, the LSU that Burrow leaves behind is +650 in the American football odds for NCAAF glory in 2021.

Burrow meanwhile starts out into the rest of his career with the weight of being No.1 draftee on his back.

Of the 14 previous No.1 picks to make it into the Hall of Fame, here's a reminder of the three most recent inductees.

The St Louis Rams took Pace as the top pick in the '97 Draft following his promising time at Ohio State. On his induction to the HOF, it was recorded that Pace had become "one finest offensive linemen of his era" during his NFL career.

His Rams team shattered NFL scoring records with their outstanding offensive play and their thrilling 23-16 win over the Tennessee Titans in Super Bowl XXXIV marked the end of almost a half-century waitfor ultimate success for the St Louis franchise on the biggest stage.

Pace would also line out in the Super Bowl against New England at the end of the 2001 season but his side lost out in a knife-edge contest.

He was selected in seven consecutive Pro Bowls and made 169 NFL appearances, making the NFL's All-Decade Team of the 2000s.

After switching to UCLA from Oklahoma, Aikman finished his college career as the third highest rated passer in NCAA history at that time.

He was drafted by a struggling Dallas Cowboys outfit coming off their worst record since going 0-11-1 in its 1960 inaugural season.

In his dozen NFL season he made six Pro Bowls and led Dallas to three Super Bowl wins ('92, '93 and '95) as well as recording more NFL wins during the 1990s than any other quarterback.

In his career, Aikman threw a stunning tally of 32,942 yards and 165 touchdowns, giving him a passer rating of 81.6 on his retirement.

Blessed with raw speed and acceleration, Smith impressed anyone who watched him at Virginia Tech and he attracted top pick from the Buffalo Bills in 1989.

He enjoyed an NFL career that spanned close to two decades and was selected on 11 Pro Bowls during his run.

At the end of 1990 season, his Bills side lost 20-19 to the New York Giants in Super Bowl XXI in Florida. That was as close as Smith got to a ring, with the Bills well beaten in future appearances against the Washington Redskins and Dallas Cowboys (twice). Smith started in all four of those Super Bowls.

With 200 career sacks, he's recognized as an all-time leader in defensive play and holds the NFL record for most sacks.

More in this category: « Greatest Rock n Roll Tragedies ever