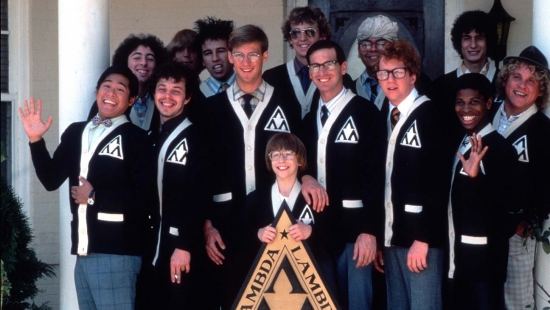 I drink.  I know things.

The more I drink, the smarter I feel, and rather than use this knowledge to solve climate change or the geopolitical situation in the Middle East, I choose instead to reflect on the pop culture of my youth.

With that I present to you my latest “10 Drunken Observations” column, which is today on the 1984 film, “Revenge of the Nerds”.

I was a kid when this first came out, so along with other college romp films, my view of what college life was severely skewed.  Also, since I myself was a nerd, how could I not love this film, just on the title alone?

I did, I still do, but this film aged so badly.

Crack open a cold one, and here are my 10 Drunken Observations.

1.  This has been discussed a lot, so apologies as this hardly new, but it is worthy of repeating.  Lewis raped Betty Childs.

At the fair, he followed her into the funhouse (which was suspiciously empty) where he donned the same mask that her boyfriend, Stan Gable had on before.  Under the belief, that it was Gable, Lewis had sex with Betty, and apparently it was good, as she stated how Stan had done things that he hadn’t done before.  Lewis then revealed himself, and she wasn’t upset at the duplicity.

Because, the sex was good.

She despised his before, wanted nothing to do with him, had nothing in common, but good sex, which again was not consensual, forgave everything. How did we think this was funny back then, and why did it take decades to figure this out?

There was a Revenge of the Nerds 3, where it is shown that Betty married Lewis.  Imagine them at a cocktail party, explaining how they met and first fell in love? That would go over like a fart in church.

2. Back to that rape (which again, is exactly what it was), Betty asked Lewis:

“Are all nerds as good as you”?

First off, every college guy thinks about sex, regardless of their social classification and logically the jocks have a lot more sex then the nerds. Jocks are athletes.  Most young women are attracted to athletes.  We are far more superficial when we are younger, and since athletes attract more women, I don’t think I am going out on a limb by saying their sex life is far more vigorous than the person majoring in computer science.

3. The rape of Betty Childs was not the first time she was sexually assaulted in the film.  During the fair, where one of the contests was to raise as much money for charity, the nerds sold pies that were just whipped cream.  Once you finished the pie, the reveal was that there was a topless picture of Betty.

How did they get it you ask?  When the Tri-Lambs installed video cameras into the Pi’s sorority house, they did it in all of their rooms, where they watched him in various states of undress. The picture of Betty was obviously taken without her consent, and by the end of the fair, every male at Adams College saw her topless.

We never saw Betty’s reaction to this, but maybe she found out after the events of the first film unfolded, as she was not in the sequel, nor was she mentioned.  Perhaps, she got mad at Lewis for this gross violation of her privacy?  She forgave him obviously, as they married, but did the other members of the sorority?

4. While the lone Asian character, Takashi (Brian Tochi) was an awful Asian stereotype, the 80s were populated with them, and Takashi was not close to the worst.  That would be Long Duc Dong of Sixteen Candles.  One character who was also presented as a stereotype of a gay man, Lamar.

I will argue that this was (in a way), one of the few positive gay characters of the early 80s.

Think of it this way.   Lamar was a member of the “good guys”.  Sure, he was called a nerd, but the nerds could give two shits about his sexual orientation.  For that matter, the jocks never made any gay jokes at his expense.

When they had a party to impress U.N. Jefferson, Lamar was one of only two nerds (the other being Gilbert) to land a date.  He wasn’t just a gay man; he was a sexually active gay man. If this was 2019, he would have straight females lining up to be his friend, and he would have no worries about not fitting in to any social circle.  In fact, if he was shunned, the shunners would be shamed for their homophobia. Sure, in this film, being gay automatically meant that he was a nerd, but again, these were the good guys.

That aside, one stereotype that I never understood as a kid, and even less so now is how being gay meant you were “limp-wristed”. Unless the person has a neurological disease, have you ever actually seen anyone with a limp wrist?

The reason I bring this up is that during the Greek Games, Wormser used his knowledge of aerodynamics to configure a javelin that befit Lamar’s limp-wristed throwing style.  It was a goofing looking object that likely had zero resemblance to anything created at M.I.T., but somehow, he threw the javelin further than the Alpha Beta’s Quarterback, Stan Gable.

Why did none of the other competitors argue this?  What rule states that you can customize your own javelin? Frankly, I think they cheated.

5. I take that back.  I know they cheated.  They cheated throughout the entire Greek Games.  In the tricycle race where you chug a beer after every lap, Takashi was given a pill to counter the effects of alcohol.  Booger used snot to gross out a competitor in arm-wrestling.  The Alpha Betas never cheated once!

6. The one question I have always wondered though is why do the Alpha Betas hate nerds so badly?  Nobody forced them to associate with them, and they go through a lot of effort to humiliate people who they likely never shared a class with, and were never at the same party.  Sure, Lewis asked Betty for a coffee date (before he raped her), but she set him up for humiliation when he and Gilbert pledged Alpha Beta.  That is your retaliation, can you can leave it at that.

Now, had Stan Gable pummeled the crap out of Lewis for (again I say, raping) Betty, he would have had it coming.

This is far more prevalent in Revenge of the Nerds 2, where in a conference in Miami, the Alpha Beta delegation was determined to rid the event of the Tri-Lambs.  That was the entire plot, but why?  They were in Miami for fuck sakes, shouldn’t they be partying on the beach and going after as many girls as they could?  Why the hell did they care that a few nerds were there?

Of course, this was a group with flawed priorities.  When their house burned down, they were not mad at the guy who started it.  They calmly sang outside while it was occurring.  What about their stuff inside?  There is no way that they got everything out in time!  Isn’t that the person to demean and bully?

7. Why does the Greek Council have so much power?  I suppose I know the answer as this is a necessary plot device, which was loosely explained when the Alpha Betas displayed a flamed sign on their front lawn that read “Nerds go home”.  When they brought it up to campus security (or was it a police station? I don’t remember), they were told that they had to address it with the Greek Council, which was then run by the Alpha Betas.

What school institution do you know that lets a fraternity/sorority have this much power?

8. When the nerds were pledging Lambda Lambda Lambda, they told U.N. Jefferson that they would have the best grades of all their members.    Did they? Remember that they were banished to the gymnasium after the Alpha Beta’s burned their own frat house, and that could not have been optimum studying conditions.  The spent inordinate energy fighting back against the jocks, restoring the house they found and they must have ignored some classes putting together their musical number.  I will wager this was a B+ Freshman Class at best.

9. Here is my biggest problem with the film.  As a sports junkie, there is one clear problem with the Adams College football team:  There were no African-Americans.  This was not the 1950s, this was the early 80s and integration in the NCAA was decades old.  Adams fielded a team with no minorities.

I hate making racial generalizations, but here is a fact of the last 50 years in College Football:

NO COLLEGE FOOTBALL TEAM WILL WIN MAJOR GAME IF THEY FIELD ONLY WHITE BOYS WHO WITH THE EXCEPTION OF ONE PLAYER (OGRE) WAS UNDER 220 POUNDS.

It is fucking impossible.  This was not a Division II or III school.  This is important to mention as the Adams Coach had a speech where he tried to get them motivated in a game against “State” where if they win, they could get to a bowl game.  Nowadays, all you need to do is secure six wins for that, but in the first half of the 80s the bar was way higher.  Long story short, this was not a team that could win the necessary games to go to any bowl.   My eye test tells me that!

I will go one step further and declare that it is impossible for this squad to win a bowl game, or any game period in the NCAA.  Not with this group!

10. So, this brings me to my final point.  Doesn’t this make the coach (played by John Goodman by the way), the dumbest man in College Football?  For those who are novices in that aspect, college football coaches recruit their players, so the fact that his team is full of only white players is completely on him.  We were also treated to a scene where he gave a motivational speech, but forgot to get them to practice.

Also, why is he constantly at the Greek Games?  Despite what this movie would have you believe, coaching means more in Football than Baseball, Basketball, Soccer and Basketball combined. If this upcoming game, (that is apparently taking place the day after the Greek Games ended), doesn’t he have game film to watch?  Shouldn’t he be with his staff, working on plays and prepping for their opponent in what was their homecoming game?

Nope.  He would rather cheer on his players during the Games, and berate them when they lost, working them into a frenzy to destroy the nerd’s house.  At least at the end when Gilbert had back-up from other Tri-Lambs, we saw quickly why there were no black football players at Adams, as the entire football team was frozen in their feet while looking at the sweater-clad African-Americans staring them down.  Jesus, what did they do when they encountered them on the football field?

That’s all I got for now regarding the greatest clash of fraternities in cinematic history.

With that being said, I am going grab another cold one and come up with other nonsense.

More in this category: « Bill DeWitt III Claims London Games Are To Thank For Baseball’s Global Popularity Seven Teams look like they could win the Super Bowl »