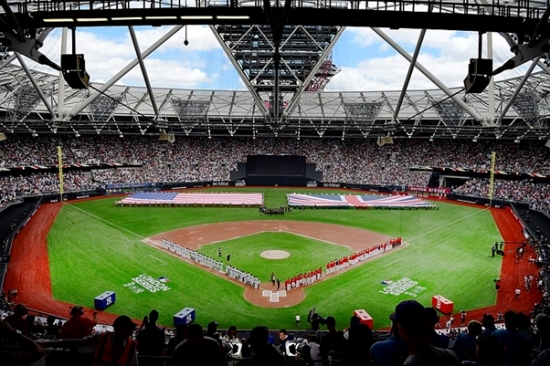 Bill DeWitt III has been president to the Saint Louis Cardinals since 2008, but that isn’t his only claim to fame. He’s also the descendant of team owner William DeWitt, and grandson of Bill DeWitt I, who owned the St Louis Browns and Cincinnati Reds. His family’s experience in MLB has been unrivalled and their recent stint in the UK has led to fans, players and managers alike all questioning whether baseball could become a staple in the UK’s sporting world.

DeWitt III’s claims likened Baseball to football, stating his hopes that Baseball could spread in the way that football has:

“I think it’s more likely that you would have a league form over there, and then maybe you could build it out, in the way that soccer … really has robust leagues in different countries. Then the World Cup becomes the true World Cup.”

June 2018 saw two games take place at London Stadium at which the New York Yankees and Boston Red Sox battled it out in two of the most explosive games the league has seen in a while. The New York Yankees won both games, but the sheer level of entertainment was a joint effort. With 30 runs in the first game, and 20 in the second, first-time viewers were treated to quite the rare experience. The teams even had to remind players that there aren’t 30 runs in every game.

Despite the entertainment, however, the players themselves did comment that the small size of the ballpark and the unusual hitting patterns that resulted were a struggle to handle for both sides when it came to pitching. While the second game was much tighter and more controlled, the first offered non-stop play that even the most robust baseball betting strategies would’ve struggled to keep up with.

The first game resulted in a 17-13 win for the New York Yankees, and lasted for a whopping 4 hours and 42 minutes. This was only three minutes shorter than the longer nine-inning game in history, coincidentally between the same teams, and also stole the second place spot for the highest number of runs in a game. It also featured one of the largest crowds since 2003, with an attendance of 59,659.

The second game saw a 12-8 win also for the New York Yankees and while it was a tighter game, it still had it’s share of incredible achievements. Despite not winning, the Boston Red Sox had three first-inning home runs for the first time since 1979. The additional 20 innings also made the two-game series the home of the most ever runs scored in consecutive games between the two teams.

While there is no guarantee that the league will continue after next year, baseball fans can be certain that 2020 will see another small series to enjoy. In May 2018, MLB announced that they had signed an agreement to hold baseball games in London, specifically at the London Stadium, in 2019 and 2020.

While it’s no secret that baseball is a heavily American sport, this isn’t the first time that it’s been played overseas. In fact, MLB has held season games in Australia, Japan, Mexico and Puerto Rico, and has begun to hold training games in China. Europe, however, was previously untouched ground but this could all be changing. Despite baseball not being as popular in the UK as America or the other host countries, this year’s games have shown that there is a market, and it’s one that could grow with the right consistency.

Next year, the Saint Louis Cardinals are set to play the Chicago Cubs at London Stadium on 13th-14th June, and registration is already open for pre-sale. There is no telling how popular this game could become over the coming months, but DeWitt III has stated that “I think there’s just an affinity for things that are authentically American throughout the world… We hope to pick up some new fans. They might be inspired to come and visit the States and tour the US and come visit some ballparks.”

Whether you’re an existing baseball fan, or are just getting into the sport thanks to this year’s events, the next 12 months are looking to be exciting regardless. Will you be grabbing a ticket for 2020?

More in this category: « Golden State Warriors or Boston Celtics: Who Has a Better Chance Ten Drunken Observations: Revenge of the Nerds »