2014 documentary on the life and times of Roger Ebert
directed by Steve James
by Live Music Head
July 11, 2014 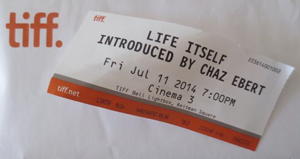 Piers Handling (CEO and Director, tiff.) introduced last night’s screening of Life Itself, the new documentary about the life and times of the late-great Roger Ebert (American writer; first film critic to win the Pulitzer Prize for Criticism (1975); author; screenwriter, journalist; partner of Gene Siskel) at the Lightbox in Toronto. That’s because Handling was friends with Ebert (a long time supporter of tiff.), for well over twenty years.

Handling also introduced Ebert’s wife Chaz, who apparently chose to only attend this screening out of the dozens of others that are happening across North America. The two of them had a chat and held a Q&A for the audience inside a sold-out Cinema 3. I particularly liked what Chaz said about Joe vs. The Volcano, that quirky little dark comedy starring Tom Hanks and Meg Ryan, one of my favourites. Apparently it was a film that Chaz and Roger disagreed over. She didn’t like it, but he gave it a thumbs up. After viewing the film a couple of times however, Chaz finally got it and had to agree with Roger. It is one I got, and completely agreed with him on when he said: “What's strongest about the movie is that it does possess a philosophy, an idea about life. The idea is the same idea contained in ‘Moonstruck’: that at night, in those corners of our minds we deny by day, magical things can happen in the moon shadows. And if they can't, a) they should, and b) we should always in any event act as if they can.”

There is much about Ebert I agree with and can relate to. And from the get-go, starting with the speech he gives at the opening, I was incredibly moved watching this doc. For even on their death beds, Siskel and Ebert disagreed. After being shut out of Siskel’s last days with cancer (as he chose to keep his condition private, and died from it in 1999), Ebert decided to completely open up about his, and invited the cameras into the hospital, right up until he too died from it in 2013. The hospital footage in this doc is difficult to watch. But I sincerely admire Ebert for doing it, for his courage. And kudos to Steve James. This will likely be one of the best documentaries of the year. Five stars outta five stars.

The trailer for Life Itself...

More in this category: « The Last Impresario Bettie Page Reveals All »