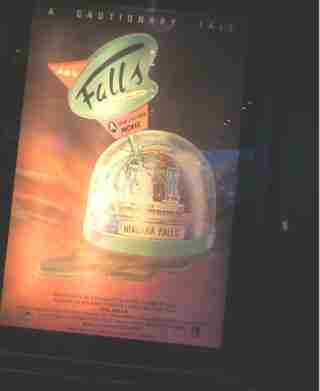 Attended the screening of The Falls: a cautionary tale at the Bloor Hot Docs cinema in Toronto, with Kevin McMahon, the film’s maker in attendance, and I’m disturbed. But I knew I would be.

Made 25 years ago, McMahon felt it was better to call it “non-fiction” then, rather than “a documentary” because if you told somebody a film was a documentary, they would think... boring! I, however, was not bored watching our idiotic culture and the destruction upon nature it brought then, and still does.

Truth be known, I was hoping to hear and see more of the daredevils who threw themselves over the Falls in barrels, speaking of idiotic culture. Did you know that the first person to do that was a woman? (The daredevils of the 1970s were a big part of the idiotic culture I grew up with, falling madly in love with the likes of Evel Knievel for one, when I was like, 10).

This film (part of the Bloor Hot Docs cinema’s “Discover Ontario” series) brought me back to the  days when Niagara Falls was still very, very wondrous to people, and the honeymoon capital of Ontario. My sister went there for hers. During the Q&A, McMahon talked about it being his home town and what it was like growing up there – the main reason for making the film. But it was the heartbreaking stories of the Love Canal (remembered as a "national symbol of a failure to exercise a sense of concern for future generations") that had me leaving the cinema feeling sick, for the lives destroyed by toxic contamination brought about by our idiotic culture. I really didn’t need to see that deformed bird! And the realization that, 25 years later, mankind only continues to increase their violence against nature, despite all we’ve learned.

More in this category: « How To Change The World Weiner »