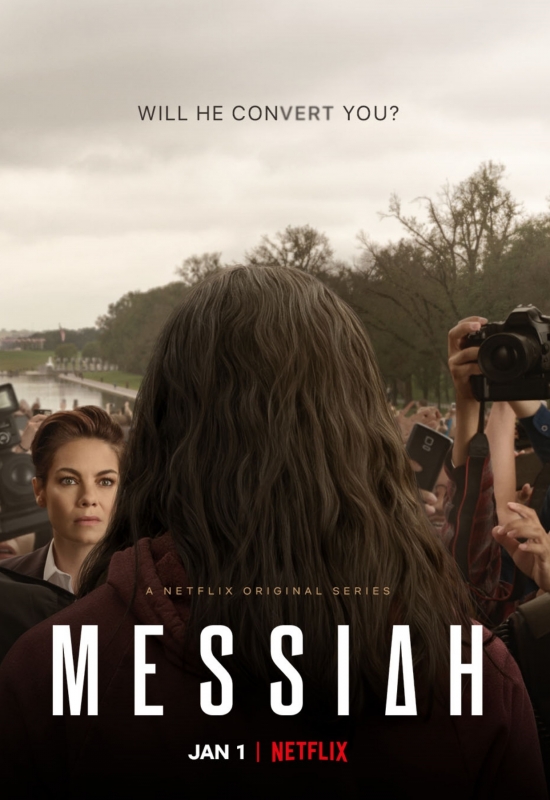 Over the last two weeks my wife and I have been watching the new NETFLIX series Messiah. We tuned to this after hearing about it from some friends who had watched a few episodes and stated that it was well worth the time. Always looking for something new and fresh from television, as lord knows, the regular cable companies have very little to offer; we decided to give it a try to see what if the show was worth the hype that we had been hearing of late.

First, a quick overview of the series, there are 10 approximately 1 hour episodes that complete the season and from what I have been reading of late, a second season will follow in the foreseeable future. What is Messiah about? Well as the title states, it tells the tale of a potentially modern day Messiah. However, it is up to you, the watcher to determine if he really is a Messiah or a charlatan in disguise. Be warned that the next few paragraphs will contain several spoilers if you have not already watched this show and intend to.

The season opens up with Al-Masih (Dehbi) in a Syria. The town which has been under attack by ISIL or DAESH if you will, and the population have lost hope as their whole world is crumbling around them. There is no hope for salvation, and prior to another artillery attack, a lone man climbs on some ruins and starts pontificating on the sins of man and if they follow him and believe, they can be saved. Once the attack is underway, inhabitants run for shelter, while Al-Masih continues to preach and remains unscathed. He promises salvation if they will only follow him. Several incidents occur to garner their loyalty and he then proceeds to lead several thousand survivors into the desert, their destination, only known unto him. Meanwhile, the eyes of the west (CIA) and an Israeli agent of the Shin Bet are watching his moves very closely, and even manage to capture him….for a short time.

While the survivors blindly follow Al-Masih (Dehbi), there are two young men Jibril (El Alami) and Samir (Landoulsi) who fall the most deeply under his spell. As the series continues, their roles become more important to the final outcome.

Meanwhile, in a small town in Texas, Felix (Ortiz), a minister who has lost his faith, is searching for a way out of his personal and financial burdens. He is in a loveless marriage and has a daughter who has lost her way, both emotionally and figuratively. In a time of decision, the minister makes a fateful choice to change his fortune. Just when he is about to act and change his family’s life, a tornado arrives and destroys the town around him; but, leaves his church untouched. Prior to the tornado’s arrival, his daughter ran away, unbeknownst to her father Felix (Ortiz). Al-Masih, (Dehbi) who suddenly appears in Texas, having escaped from the Shin Bet, saves her during the storm and returns her to her family and church. His miraculous arrival, which happens just in time to save the daughter (Rebecca/Owen), bring faith back to a destroyed town, and restore a minister’s faith in god. With the help of social media and the news, his presence in Texas, the act of saving the girl and the church being the sole structure surviving, goes viral across the United States and the World. This causes further attention to be drawn to Al-Masih (Dehbi), and in the process renews Felix’s (Ortiz) faith in god.

The series continues to follow Al-Masih (Dehbi) as he travels through the United States with Felix, his family, and a caravan of followers. Throughout their travels, Al-Masih (Dehbi) is being monitored and subsequently questioned by Eva Gellar (Monaghan), a CIA Agent, who has been following Al-Masih’s (Dehbi) movements since the first occurrence in Syria. Not only is she obsessed with him, she tries to prove at every turn that he is a fake, a poser, and charlatan. Eva, is joined by a Shin Bet agent Aviram Dahan (Tomer Sisley) who is also trying to find out who the real Al-Masih is. Is he the Messiah and second coming, is he a terrorist, is he a prophet, or is he just the best con-artist that he has ever seen?

The caravan arrives in Washington, which leads to several miracles, or illusions. While concurrently,  Gellar (Monaghan) and Dahan (Sisley) join forces to try and prove that he is a fake.

We found the whole series completely intriguing, the character development, scenery and storyline kept us wanting more. Even though I am not a huge fan of subtitles, in this film, it fit. I believe that if they would have filmed the whole series in English it would have lost some of its impact. The cinematography was very good as well as the sites selected for the film.

Now for the cast:

Michelle Monaghan as Eva Geller; Monaghan does an extremely good job portraying an intelligence agent for the CIA. She is obsessed with the target (Al-Masih) and is trying to prove to everyone that he is a terrorist, not the second coming. All this while she is fighting her own inner demons, a failed pregnancy and loss of her husband. She is convincing, and talented. One of her better roles in my opinion.

Mehdi Dehbi as Al-Masih; He was relatively new to me as an actor. I searched in IMDB for previous roles with Mehdi Dehbi, and I had seen some of the films, but he did not leave an impact or was memorable. As Al-Masih, he portrays calmness, caution and secrecy, all at the same time. His dialogue and mannerisms suited what the storyline was all about and his delivery, in our opinion was spot on. While preaching, you could almost hear the hidden messages, but were left wondering. Were the messages there or not. A very good performance by Dehbi, and I look forward to seeing him in other roles in the future.

John Ortiz as Felix; Felix as mentioned previously is troubled, he had lost his faith, and family for all intents and purposes. The arrival of Al-Masih (Dehbi) gave him something to believe in once again. However, as any man (or woman) who is desperate, he clings on a little too passionately, further estranging his family. His performance was solid as usual. Still not of a calibre to lead his own film or series, he is a strong supporting actor.

Tomer Sisley as Aviram Dahan; Tomer played a convincing agent for Shin Bet, as with Gellar (Monaghan), he has his own inner demons that his fighting with. I liked his character and his portrayal of it. I looked at his film resume, and did not recognize anything that he had been in. However, I hope to see him in further roles as I believe that he can cross over from foreign films to that of North America with ease.

Melinda Hamilton and Stefania Owen as Anna Iguero and Rebecca Iguero respectively; As the wife and daughter of Felix (Ortiz) they round out the dysfunctional family. Hamilton’s portrayal of a wife who has lost faith in her husband was done well. She demonstrated the necessary emotions to play off of Ortiz and make his role more convincing. Owen (Rebecca) the troubled daughter was also good in her supporting role. As the series progressed, her importance became more pronounced. I am sure that in the next season, she will become even more central to the general story line.

Sayyid El Alami  as Jibril Medina and Fares Landoulsi as Samir; As Al-Masih’s original followers in Syria, their devotions and beliefs lay the foundation for story that Al-Masih is the Messiah. Jibril (El Alami) and Samir (Landoulsi) prove to be vital at the conclusion of season 1 and will also leave some speculation as to who is the actual Messiah..there are some very good twists with these characters, that will leave you wondering. I do not want to leave a spoiler here, I just recommend you watch to the end.  I am looking forward to see how Jibril (El Alami) role continues to grow and develop in the subsequent season. They both played their roles well and were convincing. Both actors were new to me, and I hope that they continue to garner new roles and develop their skills.

In conclusion, as we follow Al-Masih (Dehbi) through his journeys and his “miracles” we got wrapped up into the world that was created in this show. This series is hard to pigeonhole into a category; is it religious, is it sci-fi, drama, espionage? It is none of them, yet all of them. Were we entertained, yes very much so. It is an intriguing program that is extremely well written, the twists and turns of the plot made it extremely interesting and all the characters were well developed and scripted. Will we watch the next season when released on Netflix? Most definitely! ….and we will probably re-watch the program later to get some of the nuances, hints, and plot lines that we missed the first time around.

Highly recommend this program to anyone who wants to watch a show that makes them think, search for clues and desire something a little different from television. Till the next time!