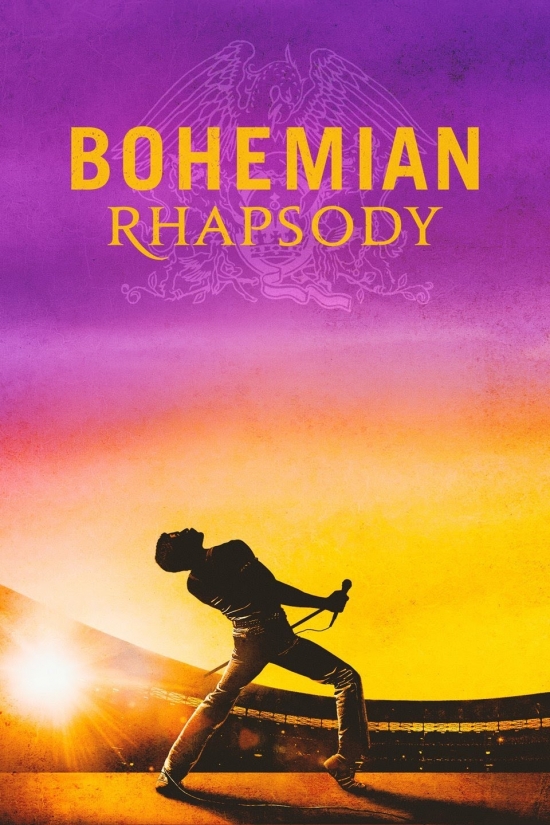 I am still working through a stack of unwatched Blu-Rays that I had collected over the years, albeit with streaming services, the pandemic, and of course a reduced Hollywood production calendar, this stack is getting smaller every week. Grabbing the next disc, I was very glad to see that it was Bohemian Rhapsody, while I had bought this disc a year or so ago, I have just not gotten around to watching it. This movie struck a chord with my memories as a youth. Queen had an eclectic range of music that appealed to me and my friends. Songs like “We will rock you”, “Another one bites the Dust”, “Fat Bottomed Girls”, “We are the Champions” and of course the title song “Bohemian Rhapsody” were staples in our music library whenever my friends and I got together to have a party. Through the years, I have always smiled in remembrance whenever these songs come on the radio, while my music tastes may have changed over the years, my memories of Queen and their music were always enjoyable.

“Bohemian Rhapsody” is a Biopic or Docudrama if you will, of Freddie Mercury rise to stardom as an individual and also as a member of the iconic Rock band “Queen”. As with many films of late, Rhapsody, starts with the end, and then flips backwards to tell you of the journey of the key characters and how they got to that point. Once in the flashback, we find a young Freddie Mercury (Malek), before he changed his name, working at an airport as a baggage handler during the day, and frequenting the pub scene at night. While on only touching on his origins, this film does display the early struggles of Mercury as an immigrant from Zanzibar with Indian roots, trying to assimilate in London in the early 1970’s.

While touring the pubs and local music scenes, he meets up with Brian May (Lee) and Roger Taylor (Hardy), to join their band “Smile”, John Deacon (Mazzello) would join them in 1971. “Smile” would then be subsequently rebranded as Queen, just prior to their first album’s release.

“Bohemian Rhapsody” portrays the band’s early struggles, internal and external conflicts, creation of the hits, recording, and finally in concert. The film had a steady pace that was easy to follow and when the music would begin it was part of the storyline and an integral inclusion. (Not like other films, where it would appear that they would break into song, without any consideration for the storyline at all). The casting was quite impressive, as many of the cast either resembled or were made to look like their real-life counterparts. While the songs were lip-synced, it was not done in such a way to take away from the story. Yes, it would have been more impressive if they performed all the songs, especially Malek, but not everyone has the chops for that kind of work. I was also very impressed with their movements while performing, specifically Malek, as it reminded me of the video’s and concerts that I had seen of Queen in my youth. Yes, there were some artistic licenses taken with the film, i.e. The signature mic-prop did not start during their first gig, the details around Mary Austin (from what I have read, changes were made to protect portions of her private life), and errors in dates for song’s and albums to name but a few. But none of these errors really took away from the film or the enjoyment.

While the film centred on Freddie Mercury (Malek) there was also enough details about the other band members to ensure that they were not presented in one-dimensional way. Additionally, I was impressed with the way the film not only handled the craziness of a “rockers” life, specifically with respect to the drugs/alcohol and sex issues that would have had a great influence on their lives. Yes, these details were presented and shown, but it was done in such a way so that the film could actually appeal to a greater audience and not offend or overly distract from the story itself.

The chemistry between the cast was quite impressive, each member played off of each other to ensure a great performance. I cannot really say that there were any weak characters in this film, as each and every one aided to the final product. Furthermore, while watching the film, it felt like you were watching Freddie Mercury, not someone playing him. Malek became Mercury, and you, as the audience forgot you were watching a film about the singer, and you could just sit and enjoy the ride.

While we are on the subject of the cast, lets take a look at the major characters.

Lucy Boynton as Mary Austin: In our opinion, Boynton did a great job portraying Mercury’s best friend. You could see the love between the two characters that cemented their relationship as well as her acceptance of Mercury’s lifestyle. Not overly familiar with her past performances, as I had only seen her in “Murder on the Orient Express” a few years ago, I found that she supported Malek throughout the film and was integral not only to the story, but also that of the main characters. I look forward to seeing her in other roles in the future.

Gwilym Lee as Brian May: First, I have to say that looking at Lee as May I must give kudo’s to the cast. They did a fantastic job of making him look like May. Like Boynton, I had not seen him in anything before, so I have nothing to compare his performance too. However, I found his performance to be extremely complimentary to the film and his co-stars. I thoroughly enjoyed his part in the film.

Ben Hardy as Roger Taylor: While not as good as casting choice in the “resemblance” department, Ben Hardy also did a great job as the drummer for Queen. His dialogue was well done, as well as the emotions during the tense moments of the band’s development and reconstruction. I was impressed that he learned to play the drums so that his shots during concerts etc. looked real and not staged. A relatively new actor, I had only seen him before in 6 Underground and X-Men Apocalypse. In both roles, he did a fair job, but as far as I am concerned, he came forward in Bohemian Rhapsody and really added to the product.

Jospeh Mazzello as John Deacon: Another case of great casting of an actor to play a real person. Looking at the photos of both (actor/Deacon) there are enough resemblances to really add to the film. While it seemed that his character had the least dialogue or impact, he was still integral to the film. What I found the most surprising, was that it was Mazzello who I had seen the most in previous films/shows. Starting as a child actor, in such films like Jurassic Park and moving all the way to the mini-series The Pacific (also done with Malek) he demonstrates a wide range of characters throughout his life, and in roles that enhanced the project. In Rhapsody he continued to support the cast and move the story along. Overall, a pretty good performance!

Aidan Gillen as John Read: Gillen is another one of these character actors who always comes across as slimy or possessing a secret agenda. This type of performance continued, albeit at a lesser level in Rhapsody. As the manager to Queen, he embodied all the right characteristics of a manager in the music industry. His sliminess fit in the role and his chemistry was admirable in the scenes that he shared with the other characters. Gillen continues as always, to be a very good supporting actor.

Rami Malek as Freddie Mercury: I saved the best for last, Malek as Mercury was formidable. I have been watching him in television and film for a few years and he never ceases to impress me. He was Freddie Mercury, he embodied the spirit, the movements and mannerisms of a Rock Icon who I remembered growing up. I can see why he won all the awards when this film was made, and he deserved every bit of it. Even watching some of the real footage of the Live Aid concert and comparing it to the performance in the film, it was like watching mirror images. Just fantastic, however, kudo’s are not only to him for emulating Mercury to such a tee, but also to the support/direction/script that enabled him to provide such an awesome performance. Malek has great on screen presence, and it really shone through in this film. Dialogue and movements were extremely well done, and as I had mentioned previously, even though he was lip syncing the music, it still came across as believable and not hokey. What can I say, a truly great performance by Malek.

What did I like about the film? I think I pretty much covered it. First, there was a great story that was expertly delivered, and even though there were some warts in the characters, the direction/script/actors allowed them to come forward without overpowering or distracting the story. Excellent soundtrack, and an extremely talented cast that not only let you think you were watching the real people, but let you immerse yourself into the story. I even liked the small cameo by Mike Myers, I actually did not recognize him at first and then had to double check with IMDB that it was actually him!

Overall a fantastic film, that any music lover will enjoy. As far as musical Biopics go, I have to say I enjoyed this a little more than Rocketman, but that could be due to the fact that I liked the music of Queen over Elton John. I highly recommend this film if you are interested in Biopics, and Music/Rock history, so if you have not yet seen this film, que it up on NETFLIX or AMAZON PRIME, open a bottle of wine and get ready to enjoy a great story with some fantastic performances, not to mention, great music too!

If you are interested in further shows/films from the principal actors, please consider the following recommendations: