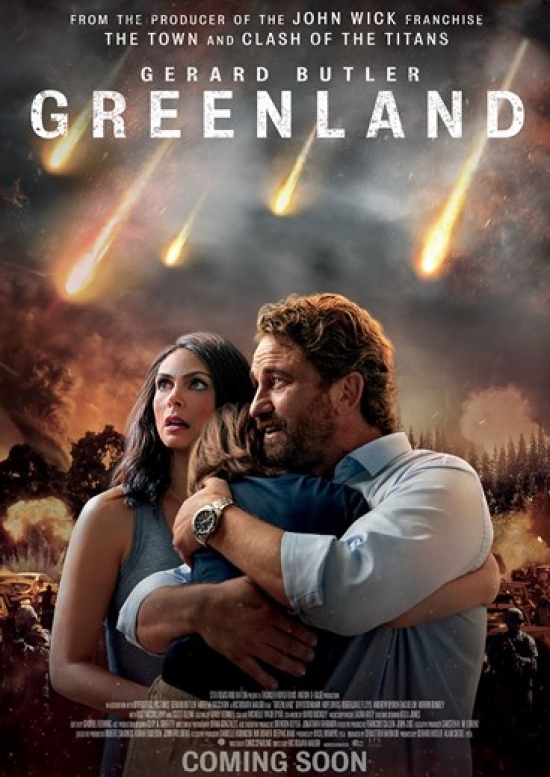 This week I decided to go back to Amazon Prime to see what I could find for a review. Lo and Behold, I came across Greenland as a new release and addition to the service. I watched the trailer, thought OK, a mild rip off of Deep Impact and Armageddon, with a hint of Geostorm and 2012. But, what the hell, will give it a try. Why not, it stars Butler and Baccarin, two actors that for the most part that I like their work. So, we queued up the film and settled in to be entertained.

Now for a quick synopsis on what Greenland is about. I will try and not to give out too many spoilers, but in a nutshell, Greenland tells the tale of a family who is trying to survive after a near Extinction Level Event. A meteor called “Clark” (I found out later, named after Arthur C Clarke, and most specifically his story “Hammer of the Gods”.) will be hitting the Earth and basically wiping out all of civilization. Now, at first the public is told that it will miss Earth (even though the Gov’t knows it won’t) and they will only really see a meteor shower to provide some stellar entertainment.  Enter our hero of the story, John Garrity (Butler), he is a structural engineer and architect with marital problems. Going home (and into the spare bedroom) so that he can join his estranged wife and son to celebrate the son’s birthday, Garrity (Butler) receives a text and Presidential alarm stating that he and his family have been chosen to go to the Government bunker to weather out the calamity. As this warning happens not only when he is shopping for last minute party supplies, but again when all their friends and neighbours are at the house it makes for a few awkward scenes between Butler and Baccarin, as well as their house guests. Packing up their things, while their neighbours start to panic, primarily as they were not called we are presented with a scene much like Deep Impact when the lucky few were taken away to safety. The Garrity’s pack up and head out to the designated pick up point, and we are informed that there is a bit of an issue with respect to the son’s insulin medicine. This insulin is dramatic foreshadowing on what will play out later in the film.

The Gerrity family is denied entrance to the base due to the medical issues of their son, becomes split up and must make their own way north. Allison (Baccarin) leaves John (Butler) a note stating to meet her at her fathers place in Tennessee. Again, I don’t want to give out too many spoilers, but let’s leave it to the fact that they all have very separate and distinct adventures, discovering the good and bad in their fellow citizens, and manage to re-unite at the father’s place (Scott Glenn) in Tennessee.

While on the road, Gerrity (Butler) learns that Canadian pilots are ferrying people to the bunker located in Greenland so he decides that he must take his family North and eventually to sanctuary. That is pretty much the story, while I gave out some spoilers, (but were they really?). We knew from the outset that they would have problems getting to safety, that the destination was Greenland (hence the title), it was just the process of getting to sanctuary that I left out (sort of).

So what did I like about the film, well, for once, Butler was not saving the world or a President, he was out to save his family. At least that was a welcome change. The acting and character development was not bad, not great, but not horrible. Butler usually delivers in the action genre, and he did so here. He played the father who just wanted to protect his family at any cost. He demonstrated good chemistry with his son Nathan (Floyd) and his estranged wife Allison (Baccarin). The only time that I found his character lacking was the scene at the in-law’s place in the barn. Ok, we had to find out why there was issues with his marriage, but it was poorly laid out and/or delivered. This could have probably been presented earlier in the film.

Additionally, there were some pretty big goofs in setting and details in my opinion. Here are some of my first observations:

Now it is time to take a look at the principal cast members of this Amazon film.

Gerard Butler as John Garrity: As previously mentioned, Butler is best suited for the action genre (i.e. 300) then the romcom (PS I Love you). While he can do both, he is best at action films where he can make the quick decisions, use his mind, and fists to solve the day. While he did not do much fighting here, the quick tempo of the film (besides the first 10 minutes) did make it for some half decent entertainment. He demonstrated good chemistry with his principal co-stars (Baccarin, Floyd and Glen) and portrayed believable emotions while he was trying to find and subsequently save his family. Not his best performance, but not his worst by far. Overall, I liked him in this role and I always look forward to seeing what he does next.

Morena Baccarin as Allison Garrity: I first noticed Baccarin in Firefly, (a sci-fi Cult favourite) and then subsequently in the remake of the series V. She is pretty talented and can pull off the worried mother, or tough alien Commander with equal ease. In the case of Greenland, she stuck with the worried mother who as the film progressed became stronger and harder. I must say that this is the first time in a while (including guest spots on various shows i.e. The Good Wife, The Mentalist) where she did not really use her sex appeal to get what she wanted. (Don’t get me wrong, I don’t mind when she does that, but this was the first time that I had watched her in a show where she did not!) Her chemistry with Butler was pretty good and you could see her feelings change throughout the film from and estranged wife who was extremely angry with her husband, back to falling in love again. Pretty solid performance from Baccarin, and on par with what I have seen in the past.

Roger Dale Floyd as Nathan Garrity: This was the first time I have seen Floyd in any production. For a young kid he was not bad. Emotions and chemistry were well presented and I think that he has the potential to go further. I see in his resume that he is in Doctor Sleep, a production that I look forward to seeing in the near future.

Scott Glenn as Dale: Glenn actually had a minimal role in this film, but I had to include him as I always liked his style. Having been around for decades, he has pretty much played the full gambit of roles, everything from a cowboy to astronaut. However, this is the first time that I can say that he really looked his age of 81. Even though he had minimal screen time and had a cheesy scene with Butler in the barn, he still pretty much stole the scenes with his presence (his presence, not the dialogue). I understand why they had to include the character, primarily as a place where they could all meet again, but it was really a throwaway role for Glenn. This was not his best role by far, but it was nice to see him in a film again.

Now for the big question, were we entertained? Yes, we were. While not an awesome film by any means, it was good enough to keep watching and it did initiate some conversation between my wife and I when the goofs were noticed (She too had been to Thule a few times, so we did talk about our mutual memories of the place). This film was far better for Butler than the last one we watched (Angel has Fallen) with him but still not as good as say, 300. It passed the time on a weekend night, and kept us watching. Would I recommend it? Yes, if you are a fan of Butler and Baccarin, you should give it a run. Also, if you like the whole “Death to humanity by meteor shtick” then this one is not a bad film to watch. It is more like Deep Impact and 2012 than Armageddon, but it follows a proven action formula and will entertain you on a winter night. So if you like what I mentioned above, and you have Amazon Prime, give this a shot.

If you are interested in other films/programs with our key characters, please consider the following recommendations: