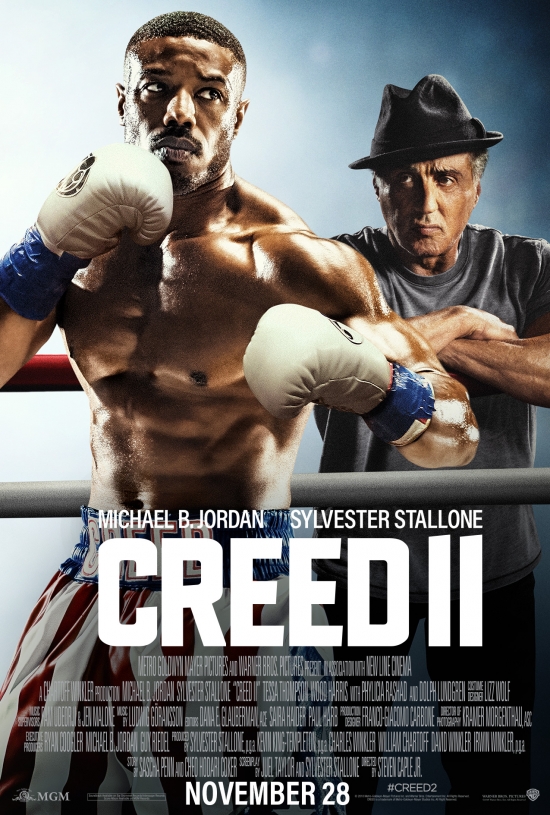 Well it was Friday night and we were unsure of what to watch for this week’s entertainment and review. So, after perusing my stack of films that were still unwatched, I selected Creed II. Creed II is the latest in the long string of Rocky (or Rocky centric) films in the franchise. While these films are often predictable, they usually offer a great series of fight sequences to ensure that the viewer is entertained, even when the plot or dialogue may be weak. Creed II was really no change to the already proven Rocky formula, or even to be more specific “Rocky IV” script. The story lines were extremely similar, the set up as well as the finish, hell, even some of the concepts and sequences were (almost) replicas from the aforementioned film. So even with all that in mind, we did sit down to give it a watch.

For a quick synopsis of Creed II, (start with story from Rocky IV…. just kidding), Adonis Creed has become the Heavyweight Champion of the world in a title match in Vegas, life is going well for him and his girlfriend/wife Bianca, and the world is pretty much his oyster. Now, cut to the former Soviet Union where we find Ivan Drago living off of the success of his son Viktor, an up and comer in the Russian boxing circuit. This success brings Viktor (Munteau) to the attention of fight promoter, Buddy Marcelle (Hornsby). Marcelle sees huge dollar signs, now that Creed is the champ, and Drago is a boxing machine. Wanting to relive the previous glory fight between Drago (Lundgren) and Creed (Withers) Marcelle (Hornsby) the slimy promoter that he is, plays on the fall of Drago (Lundgren) and his emotions. Not just pulling on his heart strings and pride, he also goes after Adonis Creed’s (Jordan) insecurity in not being as great as his father. So with all this going on, Creed (Jordan) takes the challenge from Marcelle (Hornsby) and the Drago’s (Lundgren and Munteau) to recreate the past. Rocky (Stallone) not wanting to relive his previous agony and trauma, refuses to help him for this bout. Now, as we know the standard Rocky film formula, Creed (Jordan) gets his ass kicked so hard and quick, that he ends up in the hospital. However, due to a call from a referee, Drago Jr, does not end up getting the heavyweight belt and his win is disqualified. After some soul searching by Rocky (Stallone) and Creed (Jordan), and with the assistance of Adonis’ mother (Mary-Anne Creed – Rashad), Rocky comes back to train Creed (Jordan) for a rematch. Meanwhile, the Drago’s are finding new found respect in Russia, and even the attentions of the estranged wife and mother, Ludmilla (Nielson). Living large and still wanting more, they quickly accept the re-match, except this time, it must be in Russia….hmmm just like Rocky IV you say…but that’s not all! Not only is the match (or re-match) an exact replica of Rocky IV, but also the training montages that follow are rip-offs from the earlier film. Except in the case of the Rocky/Creed, they are in the desert, vice the snow. Please! I am praying for some originality at this point with respect to the film, but alas, the Rocky IV clone continues on.

We are now at the point of the big fight…everything feels the same…just some of the faces are different in this film. To sum it up…as we all know what will happen, Creed (Jordan) almost loses, finds his inner “Tiger”, and lays a beat-down on Drago Jr, and to add insult to injury Drago Sr. (Lundgren) must throw in the towel to save his son from further damage. This all culminates in Rocky pretty much passing the torch to Creed to continue the film legacy …oh sorry I mean original story lines from that point forward as Rocky moves to retirement. So touching…it made me a bit verklempt!

Now that I have laid out the story, (as I did not worry about spoilers, because come on, there was nothing different here than from any other Rocky film), let us look at the cast of this film.

Michael B. Jordan as Adonis Johnson: Reprising this role for the 2ndtime, Jordan proves again that he can act in a fight film. Now, don’t get me wrong, this film was predictable as all hell, but I have to give props to Jordan for the level of fitness that he is in, as well as the intensity it takes to do all the fight scenes. His acting, while rather stoic, and consisting of a mix between incredulity and clenched jaws, presented pretty much the full gambit of his emotions for this film. The character itself, is rather two dimensional, and if someone does not know the whole “Rocky story”, they might get a bit lost here as nothing really gets filled in. However, I really can’t blame Jordan here, as his main job is to either deliver or take a punch, and he does both of these actions admirably. To me however, I found his roles in Fahrenheit 451 and Black Panther to be better then his character in Creed II, but overall, I can’t complain about any of the fight sequences as I enjoyed watching them.

Sylvester Stallone as Rocky Balboa: Now what can we say about Stallone as aging Rocky Balboa…he made his image on Rocky (and Rambo) and career, he did this as he followed the formula about the underdog winning in the end. Now don’t get me wrong, I have watched every Rocky film (even the dismal Rocky V, that was just horrid) and pretty much enjoyed them all for one reason or another. I remember watching these films when I was young and it would drive you to work out and make yourself better. Ok, so the urges to go to the gym may have only lasted a week or so (at that time) but the films had impact, and even have lasted the test of time. I re-watched Rocky a few months back, and I still found the film to be great and enjoyed every minute of it. I did notice that if you look at Stallone in Rocky (original) and then saw him in the subsequent films, he got bigger and more cut in each one.  In Creed II, one factor that I enjoyed is that Rocky played his age, not like he did in his last foray as Rambo, he moved slower, tried to impart wisdom and sage advice, and knew his limitations. His character stayed the course that he had developed in the films Creed and Rocky Balboa. He was enjoyable (even if predictable) in the film and he added the gravitas that the film required. I liked him in this role and believe he should take on more like this at this time. Be the mentor, not the action star, your films will be better and more believable.

Tessa Thompson as Bianca: As of late I have seen Thompson in many films and shows, from Thor/Avengers too Copper, Creed and Westworld and I have enjoyed her performance in each and everyone of them. In Creed II, the added bonus is that she actually sang in the film and it was not dubbed. While the music is not exactly my taste, I can appreciate talent when it is presented. I must admit, I enjoy her acting much more when she is in the “action” role (i.e. Thor, Avengers), but she can still portray a solid character in any genre. I look forward to seeing her in future productions and maybe as the lead character.

Dolph Lundgrenas Ivan Drago: Usually I don’t care for Lundgren in his films, I have seen him in many films that I have enjoyed, but I don’t usually like his character. In Creed II, I have to say that changed. He really played the tortured and beaten man well. In this film, the Drago’s were the underdogs, not Creed, and Lundgren played it to a tee! He was exceptional in this film and his character was integral to the plot, even far more than his son, Viktor (Munteanu) who did the fighting. In essence it was Ivan who was in the ring for this film, fighting not only for his retribution, but for his own dignity. I really enjoyed his performance here, and maybe this is another case on where actors can sometimes get better with age!

Florian Munteanu as Viktor Drago: As a fighter, and what he can display on screen, Munteanu is a monster. However, as an actor, he has a great deal to be desired. Luckily in this film, he does not talk much, just broods, stares and beats down his opponents, so pretty much in his wheel house. Would I go out of my way to watch a film with him in it again…hmm, if it was a fight movie, sure. But in anything might require some acting talent, then probably not. Even though he was supposed to be the one in the ring fighting, as I mentioned previously, it felt more that Ivan was there. He was just the person who was delivering the punches!

Russell Hornsbyas Buddy Marcelle: This film required a slimy promoter who would stop at nothing, and Hornsby did provide. I had only seen him in some of his guest roles in other programs so had nothing else to really compare him to. While his role was integral to the films progress, his on screen time was only used as the impetus to the fight, and while only there for a bit, his performance wasn’t too bad.

Brigitte Nielsen as Ludmilla: I am actually only including Nielsen in as a “mention”. I always thought her acting was dismal and that her only talent was to look with disdain at everything. Well, in that aspect, she did excel. With little to no dialogue in this film, she would just walk into a scene/or depart and look down at everything with contempt….and with that in mind, she succeeded. If she would have had to act or show any emotion/chemistry of any kind…then I am sure it would have been comical and not in a good way, just like her parts in Red Sonja and Cobra. I actually had to look up in IMDB to see if she had been anything since those previously mentioned films and was very surprised to see that she had an active career. But like her acting, nothing of any merit or substance.

Now for the big question, were we entertained? Yes, we were. Not because the film was awesome, it was not, or that it displayed any modicum of originality, no it didn’t, but because it was an ok fight film. It sorted of closed the chapter on Rocky, and passed the torch to Creed. The fight scenes, while predictable were enjoyable and they helped to carry the movie along, especially as there was only a minimal plot. One thing I did notice when watching the extra’s of the film, not once do they mention Rocky V, I guess even they realized what a piece of fecal matter it was! I would recommend Creed II to anyone who liked the Rocky films and especially Rocky IV, if you are not a fan of Rocky (franchise), then maybe you should give it a pass and spin up Raging Bull, Cinderella man, and Million Dollar Baby and give them a try.

If you interested in any films starring the main cast, please consider the following recommendations:

Till Next Time and Merry Christmas!