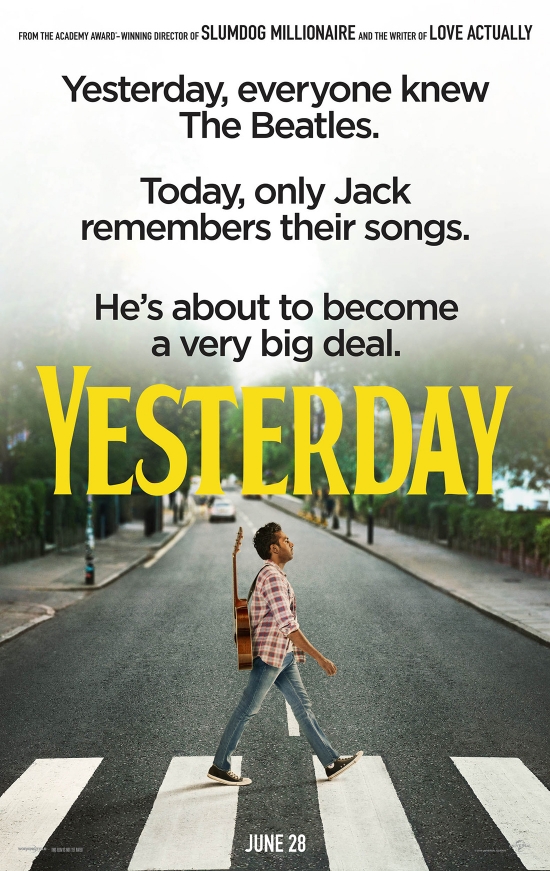 Growing up I was never really a fan of the Beatles and their music. As I had stated in previous reviews, I was more of a Skynard, Clapton, ZZ-Top, Bob Seger fan, rather than the music of the Beatles and the Stones. However, when I came across this film in the local big box store, I thought I would give it a try.

If you have not watched this film yet, and have only read the previous paragraph, “Yesterday” is a film that highlights the music from the Beatles, but it highlights it in a very unique way. Unlike some of Hollywood’s musicals of late where the music library is incorporated into the story-line in impromptu song and dance to drive the film (i.e. Mama Mia, Rocketman), “Yesterday” takes the Beatles library in a different direction.

Jack Malik (Patel) is a struggling musician/songwriter who travels from one failed gig to another, while still maintaining his job at the UK version of a COSTCO. His music manager (and secret admirer) Ellie (James), is a school teacher who wants what is best for her friend and potential paramour. Returning home after another failed gig, Malik (Patel) crashes his bike when a worldwide blackout occurs. Waking up in a hospital, and suffering some minor contusions and broken teeth, Malik states a few phrases from modern pop culture, specifically about the Beatles, which no one seems to get. Returning home, he commences some google searches to discover that the Beatles could not be found on line anywhere, not to mention a few other items like Coca-cola etc. Continuing his life (and disbelief) he spends an afternoon with friends who are celebrating his recovery. First, receiving gag gifts which are typical from any group of close friends, he also gets a new guitar from Ellie (James). While giving his new gift a test run, he sings an epic Beatles song, which none of them had ever heard of before! He again searches on line for any reference of this iconic group to no avail. So, with this newfound knowledge in mind, he re-issues all of the Beatles library as his own. Not to give out any more spoilers, “his” newly released library of Beatles songs brings him fortune, fame, and a long inner journey to find out what really makes him happy.  That is pretty much the story in a nutshell without giving out too many details beyond what was on the blu-ray box cover.

With the synopsis of the film behind us, what did I like about it?  The settings, dialogue and storyline were well done and made for an entertaining film.  I also liked the concept of the film, while not entirely new (think Hot Tub Time Machine 2), it was still new enough to give the audience a new take on music in film besides what has been shilled out in the latest musical biopics. I found that Malik (Patel) was actually pretty talented, he sang all the cover versions of the Beatles most famous songs and actually learned how to play the guitar. Additionally, the portrayal of the agents and the sleaziness that is prevalent throughout the entertainment industry was fun to watch. While the acting may not have been stellar throughout the film, there was still enough chemistry between the main characters to carry the film along. The appearance of Sheeran in the film was also a nice surprise, while not a stellar actor by any means, it was just nice to see/hear him in the film. Mind you, his role could have been completed by any actor, but having a real singer in the film did manage to give it some extra points.

At this time, lets take a look at the cast:

Himesh Patel as Jack Malik: I will be the first to admit that Patel’s performance was not worthy of an Oscar or any other award for that matter, but I have to say that I enjoyed his portrayal of Jack Malik. His renditions of Beatle song’s were quite enjoyable and the chemistry he had with his main co-stars were quite good. I think he really nailed “dewey eyed” innocence and you could actually feel that he wanted to do the right thing. I looked him up on IMDB and had only seen him in Amazon’s Aeronaut, but I can’t remember his character. Additionally, I do see that he is in a movie that I want to see “Tenet” and I will pay attention to his character once I get around to watching it. Overall, I thought his performance was good and I give him extra props for learning the guitar and singing the songs himself. I look forward to seeing him in other features in the future.

Lily James as Ellie Appleton: Lily James was the prime love interest in this film. She started the film as Jack (Patel’s) manager for his very lacklustre career, but it was clearly evident in the film that she was taking care of him as she loved him. Jack (Patel) was just to slow on the uptake to realize that she wanted to be out of the friend zone and into the romance zone. Her chemistry with Patel was actually quite good and believable throughout the film. Her character, while slightly ditzy, was a welcome counterpart to Patel’s innocence and naivety. I had only really seen her in two other productions, Downton Abbey (as Lady Rose) where I felt she was quite good, and in Mama Mia 2 (where her role, much like the film was very lack lustre and left much to be desired). In Yesterday, she proved again that she was capable to play a love interest in a film and not come off as too serious. Overall, not a bad performance and I look forward to seeing her in other films in the future.

Joel Fryas Rocky: Every film needs a village idiot and in the case of “Yesterday” it was Joe Fry as Rocky. A well meaning friend/roadie, Rocky is forever at Malik’s (Patel) side and demonstrates his loyalty and friendship throughout. While his deck of cards may be missing all the face cards, he still manages to present a likeable character who is there to support his two friends. I found his performance amusing and with just enough comedy to lighten otherwise serious scenes. His chemistry with all the other cast was enjoyable and presented quite well. This role was a pleasant change from the last time I had seen him in “Game of Thrones”.

Kate McKinnonas Debra Hammer: With respect to McKinnon, I either love her roles or hate them, depending on the project. In Saturday Night Live she is hilarious, and I especially love when pokes at the US political machine with her impersonations and quick wit. However, when I saw her in Ghostbusters, and Rough Night, I could not eject the disc fast enough from the machine. In the case of “Yesterday” I actually found her quite amusing as the smarmy music agent. She had just enough screen time and dialogue to add to the scenes (or in some cases steal them) and an important enough character to make her contribution integral to the film writ large, but not so much as to come off as annoying. She had great chemistry with the co-stars and bounced her lines off them in her patented quick delivery. Overall, her portrayal as the music agent that we all love to hate hit the mark right on. I found that what she contributed to this film was important, yet funny at the same time, while potentially giving an insight to the in’s and out’s of the music business. (At least that is what was stated in not so many words in the extra’s of the disc). A solid performance by McKinnon in this film.

So no for the important question, were we entertained? Yes, we were. We enjoyed the film from the opening scene to the close. It was light, refreshing and a somewhat new concept, with pretty much a cast of relatively new (to me) actors. The music was really well delivered, especially to a person who did not really like the Beatles growing up, and as I mentioned before, the fact that Patel sang all the songs and played the guitar was also an added bonus with respect to the films enjoyment. If you are looking for a light film, with a relatively new concept with respect to music icons of the 60/70/80’s, then give this film a try. Additionally, if you are a Beatles fan, I think that you will enjoy the film as well (Hell, even if you are not, give it a spin, you just might like the music at the end!).

If you are interested in other films or shows from the main cast, consider the following recommendations: