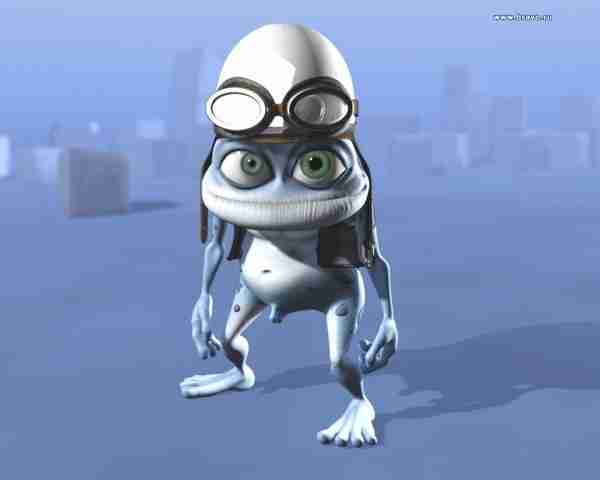 
We don’t even know where to start with this one.  In this time of autotune and sampling, many lovers of music long for an age of a singer, a guitar and a story to sing about; that cry gets especially loud, when they hear the artificial sound of Crazy Frog.

For the record, we don’t have a problem with sampling.  When done right, it can be quite brilliant and we will take it over a bad cover any day.  However, sampling often sounds like a bad smorgasbord of food days after their expiry.   In this case the mix is sounds made by teenage Swede who was trying a mimic an engine, a graphic designer who was inspired to create a “creature” to accompany the sound, and a ringtone company looking to profit from it.  This unholy triumvirate then took one of the best and most successful instrumentals of the 1980’s (Axel F.), and like a Shamwow does to water, wrenched all the goodness out of it.  It was then injected with god awful noises, strange animation and a healthy dose of crap.

Not surprisingly, the Europeans digested this nonsense up and it was a major smash over there; where as in North America it lit up the ringtones of new Americans with their Hello Kitty backpacks.  Thankfully, we have seen the last of Crazy Frog…..or so we hope.

How awful is Axel F?

+3 #1 P Smith 2013-01-27 02:38
As noted but not fully explained above, "Axel F." was the _song_, not its creator. Harold Faltermeyer created "Axel F." and other respectable techno-instr umental work in the 1980s (e.g. "19"). He's not hall of fame worthy (he's no Kraftwerk), but he was good and doesn't deserve to be associated with that "crazy frog" garbage.
Quote
Refresh comments list
RSS feed for comments to this post