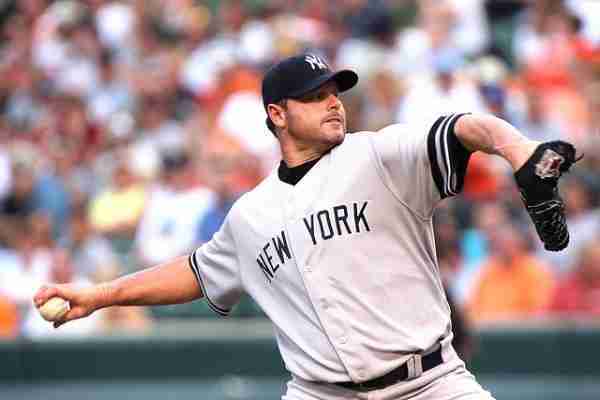 Couldn’t we just say look at the previous Barry Bonds entry and say “Ditto”? Seriously, the parallels are too great to ignore.

Like Bonds, Clemens may have had a Hall of Fame career before he allegedly took PEDs, and like Bonds, he dominated the steroid era as he did the decade before. He has the career statistics (353 wins and 4,672 strikeouts), the dominating seasons (seven Cy Youngs and an MVP) and two World Series Rings. “Rocket” Roger Clemens is arguably the best Pitcher in the past twenty five years.
None of this may matter. A solid percentage of his accomplishments took place under the shroud of steroids. Clemens was never known as the nicest baseball player (as Mike Piazza can attest to), but his post career handling of scandals has made him even less likable than the surly Bonds.   We have a feeling that Roger Clemens will forever go down in history as the Pitcher with the most Wins (and Strikeouts & Cy Youngs) who is not in the Baseball Hall of Fame. His only chance (like many others), will lie in the perception of the Steroids Era.


Should Roger Clemens be in the Hall of Fame?

Should Roger Clemens be in the Hall of Fame?

More in this category: « 1B. Shoeless Joe Jackson 2. Barry Bonds »

12
+1 #17 Dirk 2019-10-23 17:03
It's really impossible to know for sure who cheated. Clemens and Bonds fairly obviously did something to prolong their careers, but never were formally disciplined for it. Thus I'm for their admittance in the Hall, with some sort of acknowledgem ent that they at least played in an era that was "enhanced" - we are seeing players from the 80's who got in during a time where coke and amphetamines enhanced speed, and pitchers known to gunk up balls have been let in. So this stuff always happened.
Quote
+1 #16 EW 2019-10-11 16:26
Quoting F. Healy:

In an era where many people cheated, the best cheaters should be allowed in if some are allowed in. You can't let some in and not let others.

NO CHEATERS ALLOWED ! If one sneaks in, that doesn't mean others should. This applies to ALL of them.

They already are in.
Quote
0 #15 Joshua Dadds 2019-06-20 03:28
Roger Clemens is the best pitcher of all time. Period. Roger Clemens may have been a diva, and he may have used PEDs, but to keep him out of the hall of fame would turn the hall of fame into a total farce. Even without the PEDs, Clemens would have still been an absolutely dominating pitcher. Clemens' use of PEDs will forever be a stain on his career, but it would be shameful to keep such a talent out of the hall of fame
Quote
+1 #14 George T. 2019-06-12 21:37
Quoting F. Healy:

Clemens is a Hall of Fame-caliber pitcher. By a very large margin.

Too bad he juiced... he doesn't deserve the honor.

Clemens is a Hall of Fame-caliber pitcher. By a very large margin.

The only real parallel between Roger Clemens and Barry Bonds is that they both juiced. Look, Clemens was a good pitcher, and HOF worthy, and you might even argue that he was the best pitcher of the last 25 years, but you would have an argument about that. No list of the "5 greatest starting pitchers ever" would include Clemens. On the other hand, Babe Ruth was the only power hitter in history that had a career comparable to Barry Bonds. You can argue about who was better, but there isn't any other slugger you can talk about in the same breath as those two. Steroids, whatever, I don't care. The fact is that keeping Barry Bonds out of the HOF diminishes the HOF a lot more than it diminishes Bonds.

Putting steroid cheats like Bonds and Clemens into the HOF would dimishish the HOF beyond words!
Quote
-2 #11 F. Healy 2018-08-18 22:53
Quoting nateaccompli:

None of the steroid cheats should be in
the HOF. HOWEVER they should all be hanged
in effigy prior to the first game of WS in the first year of eligibility.

In an era where many people cheated, the best cheaters should be allowed in if some are allowed in. You can't let some in and not let others.

NO CHEATERS ALLOWED ! If one sneaks in, that doesn't mean others should. This applies to ALL of them.
Quote
+1 #9 Michael tabor 38 2017-08-24 02:34
Clemens is a HOF wo Steroids! Who gotndlinh steroids.
Did Jeff bagwell ever do steroids?
Quote
+1 #8 Michael tabor 38 2017-08-24 02:31
Clemens like Bonds was a HOf talent without Steroids. No Brainer! Also got caught doing steroids or not? Jeff Bagwell never did steroids?
?
Quote
12
Refresh comments list
RSS feed for comments to this post