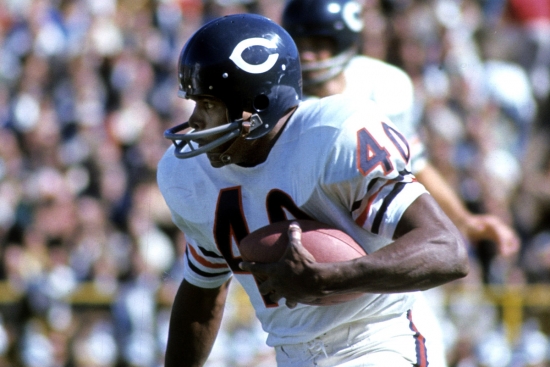 2020 continues to take our heroes away.

This morning, Hall of Fame Running Back, Gale Sayers passed away at the age of 77.

A two-time All-American at Kansas, the Chicago Bears chose him with the 4thOverall Pick in 1965.  Sayers wasted no time proving that he belonged at football’s elite level.  He won the Rookie of the Year and was a First Team All-Pro who had a career-high 20 Touchdowns.  Sayers won the Rushing Title the following season (1,231 Yards) and also was first in Yards From Scrimmage (1,678).  As expected, he was again a First Team All-Pro.

Sayers rebounded in 1969, and he was the only 1,000 Yard Rusher for the season.  He won his second Rushing Title and his fifth straight First Team All-Pro.  Sayers was named the Comeback Player of the Year.  That would be the last great year of Sayers’ career. His left knee was injured in training camp, and he was only able to play two Games in 1970, as was the case in 1971. After a poor training camp in 1972, he retired.

While Sayers retired with only 6,263 Yards From Scrimmage, he was without question the best Running Back in the last half of the 1960s, and any player who is considered that is a legend in the game of football.  Many fans who saw him play maintain that he was the fastest player they ever saw.

We here at Notinhalloffame.com would like to extend our condolences to the friends, fans and family of Gale Sayers.

Kirk Buchner, "The Committee Chairman", is the owner and operator of the site.  Kirk can be contacted at [email protected] . Email This email address is being protected from spambots. You need JavaScript enabled to view it.
More in this category: « RIP: Tony DeVito RIP: Road Warrior Animal »