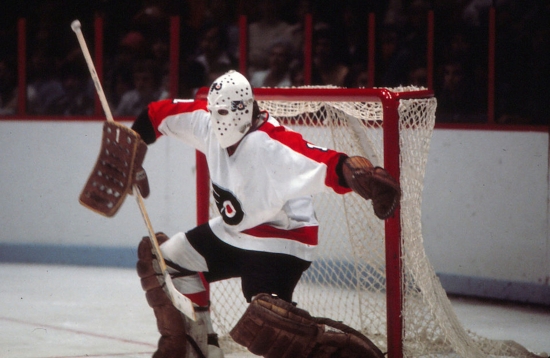 There were basically two careers for Bernie Parent and the Philadelphia Flyers.

The first would see Parent chosen from the Boston Bruins in the 1967 Expansion Draft where he would see increased playing time and improve his overall play.  He would be traded to the Toronto Maple Leafs where he would continue to improve and he was one of the players who would jump to the upstart World Hockey Association.  He wasn’t there long as he signed with the Miami Screaming Eagles, which relocated to Philadelphia as the Blazers before the season started.  Parent would have a good season there but he did not finish it and left after the first game of the WHA Playoffs due to a financial dispute.  Seeking a return to the National Hockey League (but not to Toronto) his rights were traded back to the Philadelphia Phillies and he would embark on the best run of his career.

The Philadelphia Phillies morphed into the “Broad Street Bullies” and Parent provided the netminding needed for a Stanley Cup run.  In both the 1973-74 and 1974-75 season the Flyers would win the Cup while Parent would be named a First Team All Star and the Vezina Trophy winner.  His spectacular performance in goal allowed Philadelphia to play their style of hockey and had he not got injured early in the 1975-76 season the odds were strong that the Flyers could have won three in a row.

Parent would play a few more seasons at a solid level but would be forced into early retirement when an errant hockey stick entered his mask’s eyehole and his vision was forever damaged.  He would enter the Hockey Hall of Fame in 1984.